The city of Valday, with some 16.00 inhabitants, is located in the region Novgorod in Russia, around 400 km north-west of Moscow. In this city a rather special singular architecture can be seen from the street, a project undertaken by Alexander Kalinin, who hasn't any training as an architect.

Kalinin was born around 1970. In his younger years he loved to do crafts, for example he put together a moped himself. But he also loved drawing and took painting lessons.

After military service, he wanted to study art, but perestroika began and he responded to the challenges that arose during that period. He went into business.

At the end of the 1990s, the enthusiasm was over and Kalinin wanted to return to the world of art. 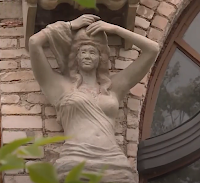 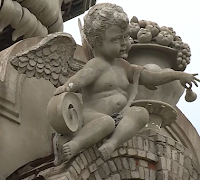 He remained a businessman, but also made paintings.
And in 2004 he started a major architectural project, building a house with an artistic look, both inside and outside. The building has such a specific design that in terms of art environments it is a singular architecture.
Seen from the outside, the specific character of the building is particularly apparent in the decorative metal elements on the roof and also in the sculptures and other ways of design that adorn the facade of the house. 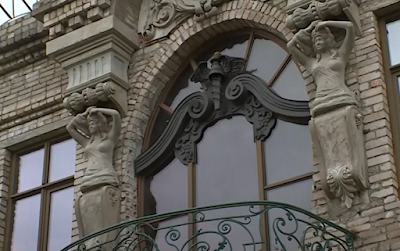 The front of the house has in its center a large window that is semicircular at the top. It is flanked on either side by caryatids, shaped after the effigy of Kalinin's wife. These life-size sculptures bear a semicircular arch on which two winged angels rest, as in the picture below.
All sculptures are cast from a special mixture, which also contains cement.
The glasses in the windows have such specific shapes that it was difficult for Kalinin to find a supplier who could offer these glasses. 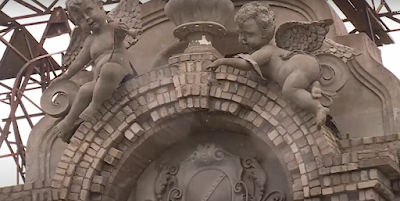 The left side of the facade is decorated with a semicircular extension, above which is a partly stone, partly metal construction, with at it's very top has a weather vane (which cannot move, however).
The right side of the facade is round in shape and forms the underside of a tower, This extension is surmounted by a belvédère, a viewpoint topped by a dome decorated with a spire.
The dome is made of beaten copper, covered with an antique patina, giving the appearance that the spire is a few hundred years old. 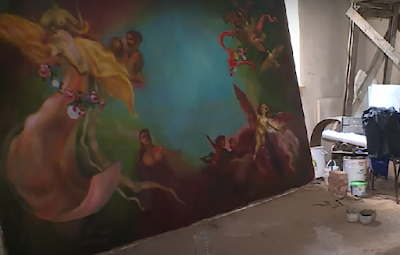 On the inside of the house, the ground floor is ready and already equipped with underfloor heating, which offers a pleasant atmosphere.
In addition to a separate room, the ground floor includes a large hall with a huge fireplace, like the open mouth of a dragon. There is also a large classical style painting in the hall, as can be seen in the image above.
By the end of 2021, when this text appears, plans for the layout of the upper floor are still to be realized, as well as the idea of painting the outer wall in four light colors -beige, yellow, ivory and lilac- this to improve the visibility of the details of the decorations.
Indeed, still plenty of work to be done.....
Documentation
* Article (September 2020) in regional newspaper Vesti-Veliki Novgorod
* Article (December 2020) on Yandex
* Article (January 2017) on website Valday with tourist information
* Article (September 2021) on the website of Novgorod Regional TV
* Website Pikabu with some informative photos of the architecture
Videos
* Video by regional TV Slavia (YouTube, 2'39", September 2020).
* Video by Novgorod Regional TV (YouTube, 3'05". September 2021