Sychevka is a small, rural village with nine streets and some 580 inhabitants, located in the Svobodnensky district in the Amur region in the Far East of Russia [1]. The village is home to a house and adjacent small buildings in the garden that have been decorated with colorful bottle caps.
Life and works
This capsule cover was applied by Tatyana Mikheeva, who started the project around 2000, when she and her husband came to live in Sychevka.
The immediate reason for the project was that planks used as walkways in the garden, got moldered in some places. To remedy that, Tatyana and her husband covered those spots with bits of plastic, cut from plastic bottles. 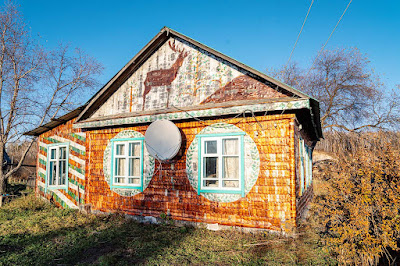 This inspired her to use plastic bottle caps to decorate the exterior walls of the house. Once started she couldn't stop and it became a project that would keep Tatyana busy for many years to come.
More than 32,000 bottles and kilograms of tiny nails have been used to decorate the exterior walls of the house and adjacent buildings. Her husband worked as a railway machinist and was often away from home, so most of the decorative work was done by Tatyana.
The villagers were skeptical at first, but once they got used to the capsule cover, they would help collect bottles and when they had visitors from elsewhere, show them the decorated house. 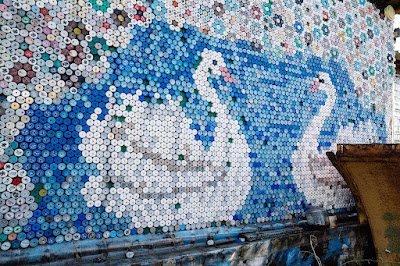 Tatyana came up with the design of the decorations herself. She chalked it up to the wall and then proceeded to fill it systematically, capsule after capsule.
This with the exception of the large, elongated panel with swans, the design of which was offered by a professional artist.
In 2010, Galina Ivanova from the village of Markovo in the Mari El Republic of Russia, visited Tatyana Mikheeva, who is her family, and was apparently so inspired by the decorations that she started to decorate her own house in the same way.
In the late 2021st, the Russian travel company Tutu organized a competition in episodes, each time showing a number of special, out-of-the-art creations, about which the public was allowed to express preferences.
In the November 2021 round, Tatyana Mikheeva's site was nominated, but she did not receive the most votes. 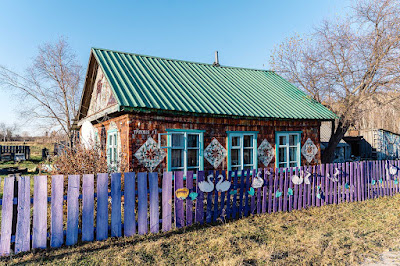 * Video (February 2014) on the website of OTR TV
note
[1] Characteristic sites in the Asian part of the Russian Federation are included in this weblog in order to give a balanced and coherent picture of the entire field of Russian art environments:
Tatyana Mikheeva
House decorated with bottle caps
Village of Sychevka, Svobodnensky District, Amur region, Russia
can be seen from the road
Posted by henk van es at 3:52 PM