The highway A-119 from Moscow to the north of Russia crosses the Vologda region and in this area, about 560 km north of Moscow, near the village of Nefedova, there is an art environment along the highway that manifests itself as a row of more than man-sized replicas of famous towers.

This arrangement of towers was created by the businessman Atom Grigoryan, who lives in Nefedova and for some years has been running a cafe along the A-119 highway near the village.

Wanting to make the area around the cafe attractive to passing tourist travelers and long-distance truck drivers, Grigoryan made plans to expand the site with an electric car charging station, a hotel and a variety of attractive features, including a series of towers.

He had borrowed the idea of erecting towers from a cafe in a nearby region, which was decorated by a small version of the Eiffel tower.

Grigoryan had experience in the field of construction and was not afraid to take on the creation of the towers himself, and this in a more than man-sized version.
His first tower, constructed in a workshop on the cafe's grounds, was a replica of the Eiffel-tower, a 17.5 meter tall construction made of scraps of surplus iron that he could get virtually for free from nearby farms.
Then, using an old chimney as a base, Grigoryan made a replica with a height of 7 meters of the Leaning Tower of Pisa, which became 55 meters high. The replica's angle of heel corresponds to the one in Pisa, i.e. 3,54 degrees.
The pictures below left and right, from News Vo newspaper, made in January 2019, give an impression of these two towers in wintertime. 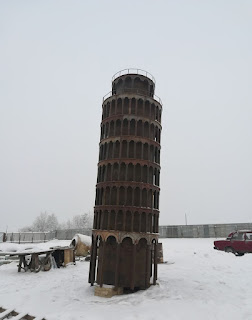 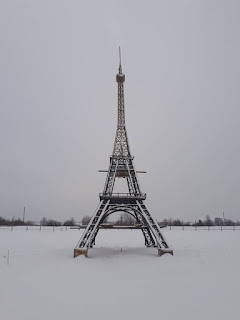 Then Grigoryan built a tower representing Russia, namely the tower in Ostankino, the Moscow radio and TV tower, 540 m high, built between 1967-1974, once the tallest in the world, now the tallest in Europe.
In 2019, the first three replicas were ready, Eiffel Tower, Tower of Pisa and Ostankino Tower.
Then, between the Tower of Pisa and the Eiffel Tower a replica of London's Big Ben was added..
The arrangement was completed by two high rising and slender looking creations:
- A replica of the Canton Tower in China, also known as the Guangzhou TV astronomical and sightseeing Tower, a landmark with a height of 604 meters. It was constructed from 2005 till 2009, and became operational in 2010. The replica is about 22 meter high.
- And a replica of a tower from he Arab world, he Burj Khalifa, a tower in Dubai, United Arab Emirates, built between 2004 and 2010, which is 828 meters high in reality and 23 meters in replica.
The photo below shows the six replicas, as arranged in line 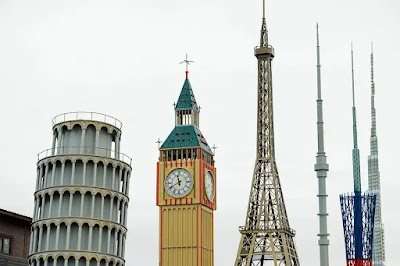 After the towers were completed, Grigoryan set to work building a hotel, which is shaped like Noah's ark, as it is believed to have looked. In the area around the hotel there is also a mini-mountain of Ararat, where it is said that the ark fell dry.
Another idea is to add replicas of the Egyptian pyramids.
Furthermore, Grigoryan has plans to brighten up the space around the former café with many shrubs and other green areas.
All Grigoryan's activities are aimed at transforming the site of approximately one hectare near the former cafe into an attractive place for motorists and, if all plans succeed, perhaps also into an amusement park for tourists.
The arrangement of replicas was selected in 2021 to participate in a Most Valued Non-Professional Creation competition organised by Tutu, a Russian travel organisation.
Documentation
* Article (November 2011) in regional newspaper News Vo
* Article (November 2021) in newspaper Rossiyskaya Gazeta (Vologda region)
Atom Grigoryan
Replicas of famous towers
along the A-119 near the village of
Nefedova, Vologda region, Russia
visitors welcome
Posted by henk van es at 1:30 PM