Trentemoult is a small commune in France, located along the left bank of the Loire River, near the city of Nantes, which lies on the right bank. In a street in Trentemoult there is a house that has an exterior that is decorated with a variety of frescoes and sculptures.
Life and works
These decorations were added by Jean-Paul Baudoin, who lives in the house and has his workshop there. 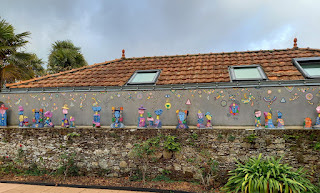 Life and works
Baudoin was born in 1946. His father was a butcher who ran a shop on Place Delorme in Nantes, France.
After completing his primary education, Jean-Paul went to work in his father's business. He did so, although from a young age his heart went out to drawing and painting. Being active artistically was therefore an activity for the evening hours. 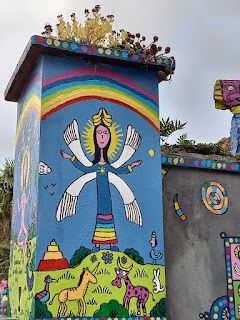 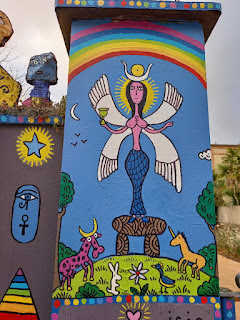 It is not known how long Baudoin combined his daily work in the butcher's shop and his evening creative activities, but at some point there was an intervention by a cousin who urged him to follow his heart, so actually entering the world of art and becoming a practicing artist.
Baudoin followed suit and probably in the late 1970s/early 1980s he began to manifest himself as a sculptor, painter and artisan potter. 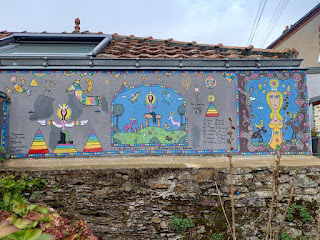 As a potter, a craft he still practices, Baudoin focused on a style of work known as Old Quimper, creations of vases, cups and saucers decorated with hand-painted characters ("petit Bretons") in a style strongly influenced by traditional Brittany.
By working as potter he rediscovered the nature and meaning of the creative process: an  activity through which a living form springs from formless, inert clay. 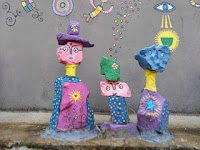 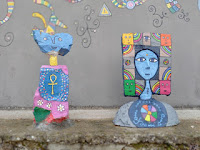 In his fist period as an artist Baudoin also began making metal sculptures composed from pieces of iron or old tools welded together and finished with a cover in bright colors.
In 1987, when he was in his early 40s, the first exhibition of his artistic work took place from his home in Trentemoult.
From 1991 Baudoin also began making colorful images on cardboard and recycled paper, evoking, for example, a whole world dedicated to pagan female deities, such as Isis and Ishtar, but also fairies, mermaids and the heroes of the Arthurian legend.
Perhaps the early 1990s were also the time when he started to decorate the outside walls of his house (sources on the internet are inconclusive), because among the images several are dedicated to goddesses.
These goddesses appear in the midst of an extensive arrangement of all kinds of colorful, mostly small-scale characters, captured in sculptures or frescoes. With his sometimes magical and kabbalistic-looking images, Baudoin is an artist who expresses the unusual in forms that nevertheless feel familiar. 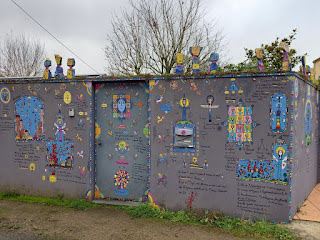 * Article (January 2022) on the weblog of Sophie Lepetit, with a variety of pictures

* Photographs and article (October 2011) by Claude Joannis on Flickr

can be seen from the street