Khabarovsk is a large city in the Far East of the Russian Federation, located at the confluence of the Amur and Ussuri Rivers, near Russia's border with China.
In a street in a suburb of the city, a scene like the one pictured above can be seen from the street. An outer part of a house is decorated with replicas of buildings.
Life and works
About Ivan Pisarenko, the self-taught artist who made these creations, not much biographical information is available. He was probably born in the 1950s, had a job as a carpenter and apparently possessed rather good technical skills, because he had a workshop with professional technical equipment, such as a lathe.
Once retired he got the idea to use his skill and equipment to make replicas of famous buildings in Moscow's Kremlin.
The Spasskaya Tower
His first creation was a replica of the 71 meter high Spasskaya Tower (Tower of the Savior), the main tower on the eastern wall of the Kremlin, built in 1491.
A comparison of the Wikipedia image of the tower -after its restoration in 2015- with the images of the tower in this blog, shows that the Pisarenko replica is very similar. 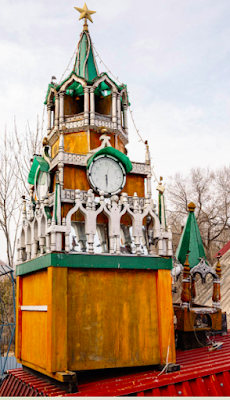 This is also demonstrated in the two images above, from the website Tutu Art 2021¹, that show how accurately Pisarenko has shaped the various decorative elements that adorn the tower.
The same goes for the large clock, which is characteristic of this building. In ancient times the clock of the Spasskaya Tower was the leading clock: its display of the time was fol owed by  all other clocks in Moscow.
The Cathedral of Vasily the Blessed
The Cathedral of Vasily the Blessed, commonly known as Saint Basil's Cathedral, is also located in Moscow's Red Square. Built from 1555-1561 it was originally an orthodox church, now it is a museum, 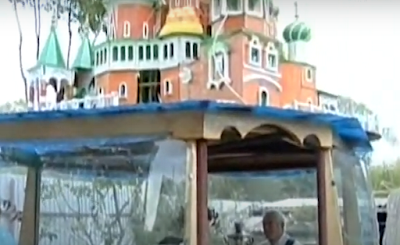 this picture from the video below,
the next three from the Tutu Art 2021 website ¹
This was Pisarenko's second project, and it took him six months to complete it.
The cathedral is made of plywood and polycarbonate, a virtually unbreakable type of plastic that can withstand both high and low temperatures.
The patterns on the domes are made from bits of colored tubes and bits of plastic, which he cut from some thirty plastic buckets. It was quite a task to visit so many hardware stores to find buckets in the right color.

As the large image above in the middle shows, this replica is situated on the roof of the gazebo in the garden. A special facility allows the cathedral to rotate, a gesture for passers-by who can now see the replica from all sides.
And when it is dark, the creation will also be lit up. 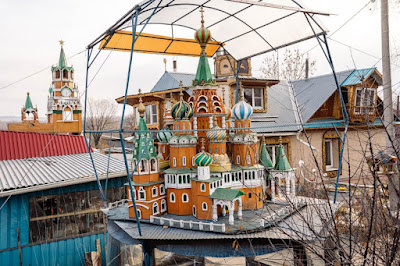 Pisarenko's art environment was selected in 2021 to participate in a Most Valued Non-Professional Creation competition organised by Tutu, a Russian travel organisation
Documentation
* Article (2021) and pictures on the website Tutu Art
* Article (November 2021) on the website Amur Media
Video
* Video (undated) by Vesti Khabarovk (YouTube, 2'11")
note
¹ the website Tutu Art 2021, reports about a competition among non-professional artists organised by the Tutu travel organisation
Ivan Pisarenko
Replicas of Kremlin classics

can be seen from the street
Posted by henk van es at 12:44 PM