Markovo is a village with about 750 inhabitants (in 2010), located in the Republic of Mari El, part of the Russian Federation, about 800 km east of Moscow. The elongated village consists of a number of houses, located to the left and right of a main road.
A self-decorated house
One of these houses attracts attention because of the colorful decorations that adorn the outside, a project undertaken in 2015 by Galina Ivanova, who lives in this house, Not much biographical information about Galina is available on the internet.
It is mentioned that she is retired, and there is a second fact, very interesting from an art environments point of view: she is related to Tatyana Mikheeva, who is her aunt and who was presented earlier in this blog as creator of a house decorated with bottle caps.
Galina visited Tatyana in the early 2010s and she was apparently inspired by Tatyana's artistic creation, because when she was back in Markovo she decided to decorate her own house in the same way. 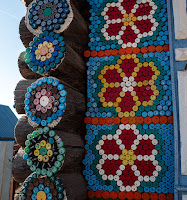 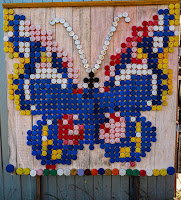 Galina started decorating her own house in 2015, the first subject being the image of a dog, placed on the right of the two windows of the house on the side of the road.
After that, all kinds of images followed, such as swans, a horse, a butterfly, a rooster and also a variety of decorative patterns, all added to the exterior walls of the house.
Meanwhile, the front and side walls have been fully decorated. and now a decoration has also appeared on the fence that separates the area next to the house from the street, a fence that offers space for more decorations. 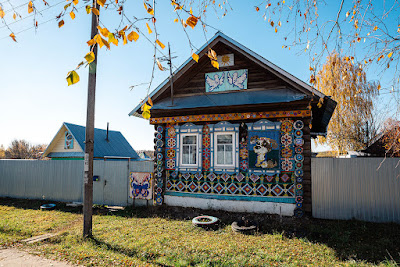 Both Galina Ivanova's and Tatyana Mikheeva's site were selected in 2021 to participate in a Most Valued Non-Professional Creation competition organised by Tutu, a Russian travel organisation.
Documentation
* Entry on the website Tutu Art 2021, with a series of pictures
* Short article (November 2021), mainly mentioning the Tutu competition, on website VNB
* Short article (April 2019) on the website of newspaper Seldon News
Galina Ivanova
House decorated with bottle caps
Village of Markovo, Orsha district, Republic of Mari El, Russia
can be seen from the street
streetview
Posted by henk van es at 3:29 PM