The building in the photo above is a small chapel constructed single-handedly by Josef Haas (also Sepp Haas), an inhabitant of the German village of Oberroth, some 40 km north-west of Munich.
Life and works
Josef Haas (1925-2015) was the son of a farmer in Oberroth. As as a young man he was called up for military service and he became part of the units that invaded Russia. He was not involved in the attack on Stalingrad, but just as well he became a prisoner of war in Russia. All together he was two and a half years away from home
Haas has always been silent about what he experienced in Russia during the war. But once returned to his hometown it's not impossible that he tried to incorporate these personal experiences into making something of sacred significance.
In the spring of 1949 he began indeed building a small chapel in a forest to the north of the village, using stones from the rubble of bombed-out Munich. These stones were brought to the edge of the forest and from there Haas transported them with a wheelbarrow or pushcart to the construction site. He did everything himself, with his own hands; only when pouring the concrete foundation, he got some help from friends.
The chapel became 2.50 m long, 1.50 m wide and about 3 m high. Furnishing the interior also took some time, but in 1953 the project was completed and the site could be opened to the public. In 2003 its 50th anniversary was celebrated.
Originally the roof of the chapel was covered with solid red tiles, which in 1972 were replaced by gray Frankfurt tiles. When these tiles started to leak after more than thirty years, in 2008 a roof-covering with red tiles returned and this one is still there today.
The chapel's official name refers to Stalingrad, but it was also known as Salzer Kapelle, Kapelle im Ganterholz or Herz-Jesu-Kapelle. Currently the chapel belongs to the Catholic parish of the village of Schwabhausen, a few kilometers west of Oberroth.
Interior of the chapel as it was in a first period 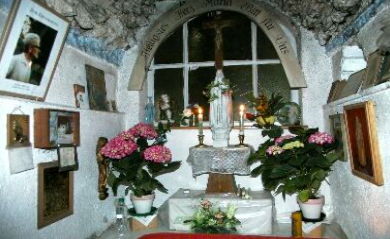 The image above shows how the interior of the chapel looked like in a first period from 1953 until 2004.

The furnishings seem a bit busier than those of a later period, but the main difference is the patron

saint to whom the chapel is dedicated. In the first period it was the Virgin Mary, in a subsequent period

after a renovation in 2004 it was Jesus.

In 1960, Haas and his wife migrated to Paraguay. never to return to his hometown. His brother, Thomas Haas, would then take care of the maintenance of the chapel for more than forty years

From 2002 on the chapel has been managed and maintained by the Soldaten- und Reservisten-Kameradschaft (SRK) Schwabhausen 1920 a comradeship of soldiers and reservists from the region, with Albert Winkler as chairman. Winkler had a lively correspondence with Haas until the latter died in 2016, He would then consult with Josef's son Dieter Haas, who visited his father's birthplace and the chapel for the first time in 2015 at the age of 52.

A renovation that took place in 2004, also included an adaptation of the interior and exterior of the chapel. Below the most important changes are reviewed.

The chapel after the renovation in 2004 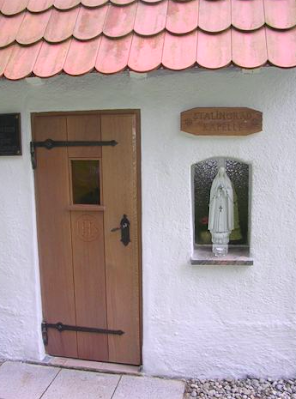 As far as the exterior is concerned, the renovation led to some changes.
A nameplate was added to the right of the entrance, making Stalingrad Chapel the official designation from then on.
In the niche to the right of the entrance door is now a sculpture of the white Madonna of Fatima, a sculpture Haas had received from his parents. He has indicated that he agreed with the move of this sculpture from the inside to the wall at the outside.
A year earlier, the entrance had also changed, because in 2003, on the occasion of the 50th anniversary, a bronze plaque, sent by Josef Haas from Paraguay, was placed to the left of the entrance door. More about this plaque at the end of this article.

The altar inside
The image above shows first of all the semicircular ceiling of the chapel, which is covered with stones in such a way as to create the illusion of a cave.
Then you can see the window that is located above the altar. This window is surmounted by a calibrated text, which reads: Heiligstes Herz Jesu bitt für uns ! (Sacred Heart of Jesus, pray for us!)
The red-white-blue colored windows refer to the national flag of Paraguay.
Under a crucifix in front of an upper part of the window, there is now a statue of the Sacred Heart of Jesus, made by an artist from Magdeburg, all according to the wish of Josef Haas, with whom all changes were reviewed.
.
Above the altar, situated below the window just discussed, is a wall with three framed documents relating to the Battle of Stalingrad. They express the terrible events that took place there and encourage visitors to the chapel to reflect on the fate of the victims of the Second World War:
The document in the middle is a photo of the battle scene in Stalingrad by Franz Eichhorst.
The documents left and right refer to a drawing made by dr Kurt Reiber., a military doctor involved with the German units near Stalingrad.
The document at the left is a copy of a charcoal drawing made by Reiber, generally called Stalingrad Madonna, which shows a mother (the Virgin Maria) with her child wrapped in a wide coat. In the margin is written Weihnachten 1942 im Kessel, Licht, Leben, Liebe (Christmas 1942 in the boiler, light, life, love)..
The document on the right states that Reiber made the drawing on the back of a geographic map of the Soviet Union. when surrounded near Stalingrad during Christmas 1942. Reiber died in captivity in 1944.
The original drawing has been in the Kaiser Wilhelm Memorial Church in Berlin since 1983. Many copies, widespread in Germany have made the drawing a symbol of the desire for peace.
The memorial plaque on the outside of the chapel 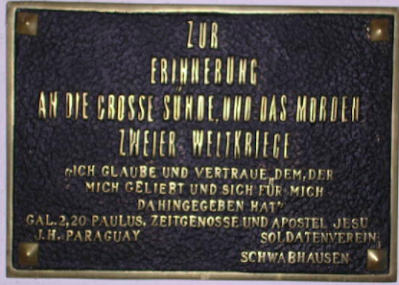 To conclude this review of the Stalingrad Chapel, a few remarks regarding the memorial plaque on the outer wall to the left of the entrance door, as shown above. In 2003, on the occasion of the 50th anniversary of the chapel, Josef Haas sent this plaque from Paraguay to the SRK Schwabhausen, without the latter knowing anything about it beforehand. Haas also expressed his confidence that SRK would lovingly take care of the preservation of the chapel.

The plaque is important because it provides some insight into why Haas undertook the construction and decoration of the chapel. The text reads in German:

In English this reads: In memory of the great sin and murder of two world wars "I believe and trust in him who loved me and gave himself for me". The plaque states that the part of the text in quotation marks is a quote from the Apostle Paul (Galatians 2:20). The apostle declares here that it is Jesus whom he trusts.

The reference to Jesus is significant because in a 2003 telephone conversation with the SRK president, Haas said that one of the reasons he migrated to Paraguay in 1960 was his Catholic upbringing, which had "ruined his soul". That probably had to do with certain aspects of the faith that his parents emphasized, because the reference in the quote seems to show that Haas was a man of faith, with a real trust in Jesus.

* Website of the SRK Schwabhausen 1920, with a variety of pictures

*  Article about the chapel by Hans Schertl