About 130 km west of Barcelona, Spain, is the village of Sant Marti de Maldá. Along with several other villages, since 1972 this community has been part of the municipality of Sant Martí de Riucorb, located in the Urgell region with Tàrrega as its capital.
Josep Amenós, an inhabitant of Sant Marti de Maldá, owned an area outside the town which he transformed into an art environment, that he recently donated to the community. Here is the story.

Life and works
Josep Amenos Felip was born in 1934 into a farming family with a farm in or near Sant Martí de Maldà. He was the youngest of two sons, both of whom would remain unmarried and would continue to live on their parents' farm.
However, after his primary education, Amenós lived for some time in the town of Tàrrega, also located in the Urgell region, where he worked at a company that manufactured rabbit cages. Since he from an early age showed a certain artistic ability in making drawings, he took the opportunity to take drawing lessons at the School of Arts and Crafts in Tàrrega 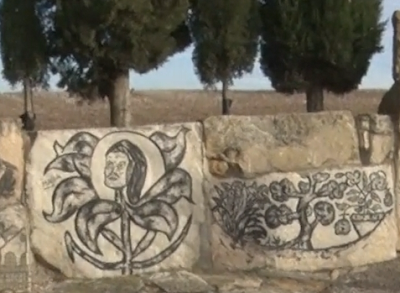 However, a career as a professional artist wasn't in the offing, as it soon became obvious that his future lay in running his parents' farm together with his brother.
The Amenós brothers ran the family business successfully. They were willing to work hard and live frugally, what allowed them to expand their land holdings with excess income. One of those areas was a piece of land about 2 to 3 km north-west of Sant Marti de Maldá, which had previously been used as an orchard with almond trees, but meanwhile had become neglected and was used as an illegal waste dump. 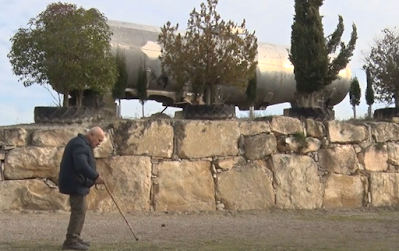 In the late 1990s, this piece of land was to be transformed by Josep Amenós into an art environment. He was now 64 years old, probably retired, as well as his older brother. (His mother had died in 1993 and his father in 1994).
The project started with refurbishing the neglected grounds, then he went on to work on the decorative elements, which can be distinguished in wall drawings, sculptures and installations/structures. 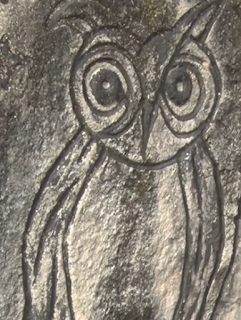 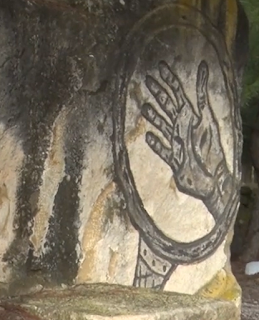 With regard to structures and installations, first mention should be made of the old barn on the site, which Amenós converted into a chapel, richly decorated on the inside and with a large stone cross on the outside. The roof of the chapel is decorated with a car tire structure, two horizontal and one upright, as can be seen in the second image from above.
As is also apparent from the name by which the site is often referred to, Amenós made extensive use of old car tires. This not only as a decorative element, as in the chapel and in the picture below, but also functionally to create stairs to overcome height differences. The use of the many old car tires initially met with objections from environmental defenders, but later they realized that in using the tires, this waste had been properly disposed of.
As for the installations, an aircraft resting on a wall of bulky stones, stands out, as in one of the images above. The available documentation doesn't state why this aircraft is part of the decorations. 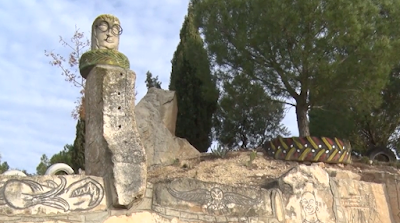 The park includes some sculptures, such as the character in the image above and a (two-dimensional) peasant couple located at the entrance of the park, but the largest number of decorations are drawings applied to the rock walls.
Near the entrance of the site are a number of large stones in a circle, with numerous carved images, such as the Titanic and an airplane. The rock walls in the rest of this art environment are richly provided with all kinds of images that often refer to life in the countryside, depict biblical situations, or deal with all kinds of other themes.
The drawings are often executed in a black shade, which contrasts sharply against the yellowish color of the rocks. 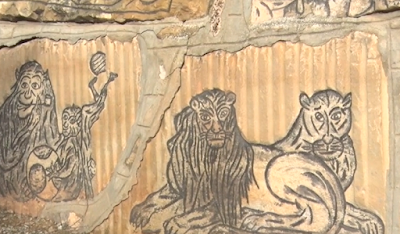 In December 2018, Amenós donated the site with the art environment to the community of Sant Marti de Malda, this on the only condition that a rental income would be used for its maintenance. As related,  his father and mother died in the early 1990s. In 2015 his brother had died and there was no other family.
The municipality accepted the donation with approval and appreciation. Because there was still an ongoing lease contract, the village became the actual owner from 2021, but preparations were already made from 2018 to give the park more publicity, such as signage and expansion of bungalows and the like of the campsite near the park.
Amenós, who is now in his late eighties and has become less energetic, has ended further expansion of the art environment.
Documentation
* Article by Jo Farb Fernandez, "In northeastern Spain, a self-taught sculptor-architect has created an open-air, art-filled refuge", in Brutjournal (January 2022) (First published in September 2021, Brutjournal is a new web-magazine in the field of outsider art, with articles accessible to subscribers)
* Article (December 2018) in regional newspaper Segre Tàrrega
* Article (December 2018) in the newspaper of Urgell TV, with video
* Location of the site on Wikiloc
Videos
.* Video by Turisme Urgell on YouTube (undated)

Email ThisBlogThis!Share to TwitterShare to FacebookShare to Pinterest
Labels: display of sculptures made from stone, frescoe decorated exterior