The Paprotecka country road leading to the entrance of Henryk Sawko's Kamienny Park (Stone Park) in Poland, on one side is richly lined by rocky stones, as can be seen in the photo above and also on Google Streetview.
The visitor to the park thus gets a foretaste of an art environment that is largely formed by an exposition of stones, both those arranged in various geometric shapes and those transformed into sculptures.
Life and works
In the late 1990s Henryk Sawko came up with the idea of building a stone memorial to mark the turn of the century, a project that in the early decades of the new century would evolve into a major art environment called Kamienny Park.
Sawko was born in 1950. In his younger years he was trained as a locksmith and he also liked to go out with his motorcycle to discover Poland. These travels convinced him that his native region of Mazuria was the most beautiful in all of Poland
He did not go to work as a locksmith, but became a farmer on a farm in the village of Rydzewo, which is part of the municipality of Miłki, in the Giżycki district of the Warmia/Mazuria region in the north-east of Poland.
Sawko got married and the couple had children.
When in the late 1990s Sawko came up with the idea of making a memorial to the centenary, he was approaching the age of fifty.
His children had left home, farming became less and less profitable, so once the memorial was completed it was a small step to feel inspired to use the stones that abounded on his farmland, to create a park with an exposition of stones and stone sculptures.
Construction  began on a hill in the land behind the farm. A striking self-built windmill was added to the hill, and was surrounded by an arrangement of stones.

From the hill towards the house/farm, alignments of stones were laid that are reminiscent of the Neolithic arrangements as in Carnage, Brittany.

The photo below gives an impression of the way the stones are arranged, and the website Mazury 24 has aerial photos that very clearly depict the alignments of stones. 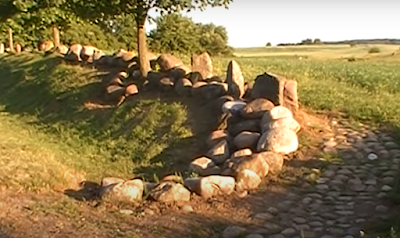 The alignments of stones are generally composed of quite large boulders, collected in the thousands by Sawko from the surrounding farmland.

These lines are regularly interrupted by somewhat larger, upright stones that portray specific characters or from a Neolithic point of view could be compared to menhirs. 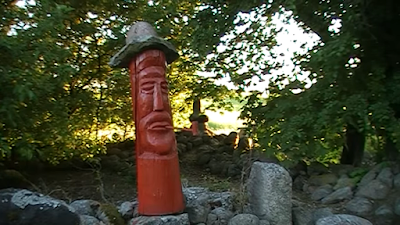 These larger stones are often worked and transformed into human characters or animals. Other stones, flatter in shape, can serve as a background for texts. 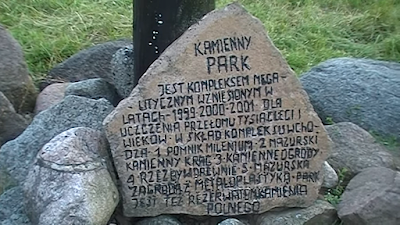 Around the home
In addition to the rows of stones that creatively shape a large part of the area behind the former farm, the yard near the house and the associated barns are also part of the art environment.
First of all, there is a collection of tools and implements that give a picture of farming as it was practiced on Masurian farms in former times.
In addition, Sawko has put his own hand-made decorations on the walls of buildings around the yard.
He decorated a whitewashed wall with black images, cut from metal, such as birds and other animals, but also sailing ships 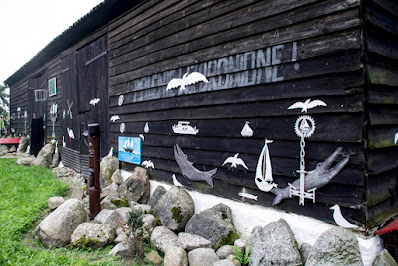 Documentation
* Article on website Mazury 24 with among other things, aerial photos of the alignments of stones
* Article by Radek Łabarzewski (March 2022) on weblog Znalezienie
* Article by Kamil Pietrowiak, "O sztuce, która niejedno ma imię. Przypadek Henryka Sawki, twórcy Kamiennego Parku w Rydzewie" (About art with many names. The case of Henryk Sawko, the creator of the Stone Park in Rydzewo)

Email ThisBlogThis!Share to TwitterShare to FacebookShare to Pinterest
Labels: collection of specific stones, display of sculptures made from stone, varied decorations on exterior walls