Safenwil is a municipality with about 3600 inhabitants in the canton of Aargau in northern Switzerland, bordering Germany. Some two kilometers south-west of this city is a forested area called Sodhubel, which is characterized by sandstone rock formations. 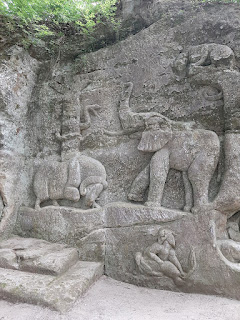 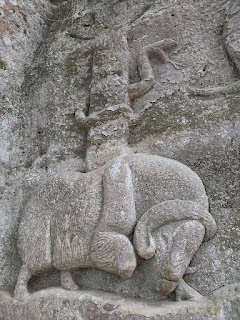 Life and works
Hans Widmer (1887-1964) was born in the village of Schönenwerd as the son of a local baker. He grew up in this village, which is about six kilometers north of Safenwil.
After his primary education, he did an internship as a gardener and then worked as a mechanic in a small shoe buckle factory.
As a young man he was a member of a gymnastics club and during an exercise he had an unfortunate fall that left him with back pain for the rest of his life. 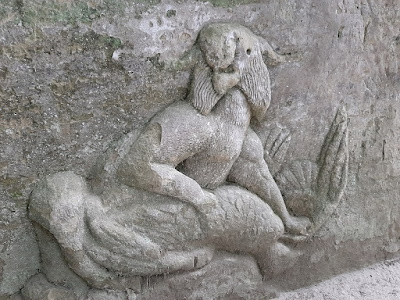 Widmer was a somewhat withdrawn personality, who did feel an urge to improve the world. From that point of view, he joined the religious group Jehovah's Witnesses in Safenwil.
Here he met the woman he would marry, Amalie Hilfiker (1890-1967), living in Safenwil. She was a somewhat dominant but also charitable person, who did a lot of good for people in Safenwil who were struggling financially. She herself had a good job at a regional firm.
Partly because of the financial security that his wife offered, Widmer was able to develop activities as a preacher. and missionary. He also had himself hired as a comedian at weddings and association events, but that was not such a success, because people preferred to hear funny jokes instead of his message that one should strive for the good life.
Widmer only found his true destiny in terms of work when he became acquainted with a local cabinetmaker and woodcarver from whom he learned woodcarving. Here he discovered his artistic talent.
He started designing boxes, tables and chairs and he carved his first animal figures. And then, when in 1939 he was in his early 50s, he began carving all kinds of creations into the sandstone rocks at Sodhubel, a project he would work on until 1945 Creating an art environment
In earlier centuries, on the hilly spot where Widmer started making sculptures, there was a building named Scherenberg Castle, which was abandoned in the 17th century.
Then the inhabitants of Safenwil used the already cut sand stones of the castle walls to build their houses. And after the castle was completely demolished (only a few foundations remained) the stones for constructive projects in Safenwil, were extracted from the hill itself, which resulted in the vertically sloping sand and stone expanses, into which Widmer could carve his sculptures.
The very first image and the one above give an impression of the rock face that Widmer used. 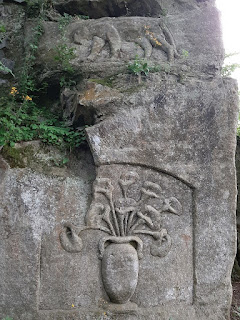 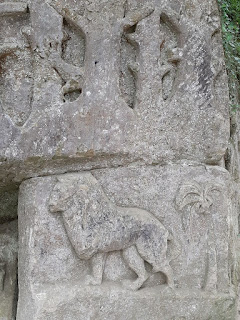 In a studio in a small basement space owned by people in Safenwil he knew, Widmer could spend days working on drawings of the sculptures he wanted to make. And then suddenly he got the urge to act, and he would go to the sandstone walls of the Sodhubel and work there day after day on his sculptures.
In the area in front of the sandstone walls he had built a wooden barrack to store his tools and to shed in bad weather. 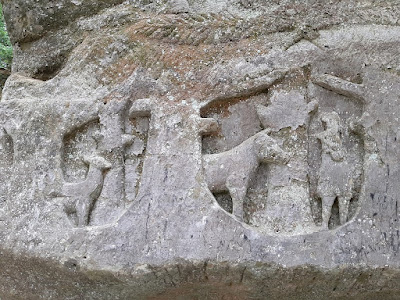 The themes that Widmer expressed in his sculptures have been aptly summarized by Walter Hess in an article (see documentation) as a biblically substantiated fairytale patriotism.
Indeed, there are biblical stories portrayed, such as an Angel of Peace, there are scenes taken from fairy tales, such as Little Red Riding Hood, and there are expressions of Helvetic patriotism, such as the Rütli Oath, an oath sworn in 1307 by the delegates of the three states that united and were the beginning of what would later become Switzerland (see the picture all the way down).
In addition to the sculptures related to the above-described theme, there are also stand-alone sculptures of, for example, a vase with flowers, as well as all kinds of animals, such as an elephant, a deer and others.
After completing his creation, Widmer remained active in carving mainly wooden boxes, tables, candlesticks and clocks until the end of his life. 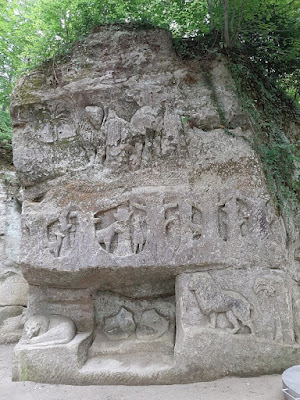 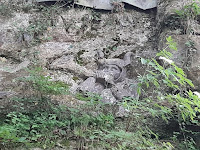 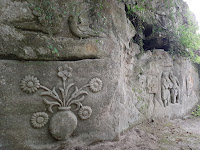 Gradual decay of the sculptures
Standing in the open air, the sculptures are highly exposed to weathering. The sandstone of the rocks into which the sculptures are carved is very soft and treating the sculptures with a hardening agent means that the outer layer in winter would harden by freezing, but would peel off when thaw sets in, which eventually leads to large damage.
Surrounding the entire sandstone rock with a building that protects the sculptures against the weather, might technically be possible, but the question is whether that is financially and spatially acceptable.
Documentation
* Article by Ernst Lüscher, Steinskulpturen beim Sodhubel in Safenwil (Stone sculptures at the Sodhubel in Safenwil), in Magazine Heimatkunde Wiggertal, Volume 51 (1993)
* Article (March 2007) by Walter Hess, Sodhubel Safenwil: Friedensengel mit Löwe bei Rütlischwur (Sodhubel Safenwil: Angel of peace with lion at Rütli oath)
Hans Widmer,
Sodhubel sandsteinskulpturen,
Höliweg, 5745 Safenwil, Canton of Aargau, Switzerland.
can be visited
Google Maps (with pictures)
Posted by henk van es at 3:07 PM