Armand Schulthess (1901-1972) was born as André Fernand Armand Thuring in Neuchâtel, Switzerland. His father died a year after his birth. His mother remarried and he took his new father's surname, going through life as Armand Schulthess.
As a young man, Armand received a commercial education.
From 1921-1935 Schulthess owned a shop in ladies wear, which had to close due to the economic recession. Subsequently he worked for some 15 years in the governmental Department of Public Economy, located in Bern, the Swiss capital
At age 50, in 1951 he left this job to retire into a secluded house he owned since 1941 located in Auressio (canton Tessin/Ticino), an Italian speaking area in the south of Switzerland.

Living on his own (his two marriages had failed), he began a project that included the inventory of all human knowledge, doing this by using the notes he had made in the 1930s and 1940s in some 70 notebooks, as well as the collection of books and magazines he had built up to that point
Creating an art environment
Schulthess gave shape to his project by writing down referrals, annotations, quotes, etc on small lead or tin plates, which he added -often bundled and interconnected with ropes-  to the trees and the bushes in the large chestnut garden of some 18.000 m² (4.4 acres) around the house.
Paths in the garden would lead eventual visitors more or less systematically through the whole of human knowledge. 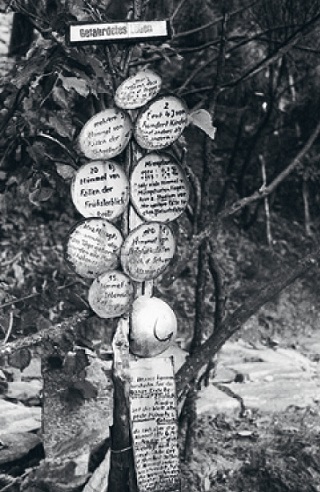 Schulthess made thousands of these plates. In this way he transformed the garden into an art environment that has become known as the garden of knowledge.

Apart from these plates, he had his annotations on paper about everything which can be known about human culture and history, like he also singlehandedly composed illustrated books about sexuality, altogether a rather large number of  volumes.

Over the years Schulthess' life became more and more isolated, although some representatives of the Swiss artworld who were interested in his activities, occasionally could visit him.

The next year the inheritors restored the garden into its original condition and removed/demolished almost all plates and almost all books, in this way depriving Switzerland of a very special art environment.

Only a few of  Schulthess' works have been saved. The Museo Casa Anatta on the Monte Verità near Ascona in Switzerland has a room with a number of these saved works and the Collection de l'Art Brut in Lausanne also has a number of plates and books.

Swiss photographer and filmmaker Hans-Ulrich Schlumpf, when preparing a movie about Armand Schulthess, between 1963 and 1972 visited him regularly and made a lot of pictures, both of the exterior and the interior of the house. In 1973 he also succeeded in saving some of Schulthess' single-handedly made books. Pictures and impressions of the books have been published in 2011 (see documentation)

Email ThisBlogThis!Share to TwitterShare to FacebookShare to Pinterest
Labels: installation