This is the story of a man who for the largest part of his life has been active in single-handedly  building a cathedral.

Born in a family of farmers, Justo Gallego Martinez (1925-2021) for a number of years was a monk, until due to tuberculosis he had to quit the monastery. Eventually he recovered from this illness, which deepened his religious conviction.

The family owned a plot of land of 8000 m² in Mejorada del Campo, a community near Madrid. On this plot Gallego wanted to create a building as an expression of his gratitude and his deep faith. On October 12, 1961 he laid the foundation stone.

Without any training in architecture, building technique or brickwork and without any building permit or construction drawings, but with the concept of classical architecture of cathedrals in his mind, he single handedly began building an imposing cathedral.

The local authorities did not intervene. However, they were not convinced of the firmness of the construction, but during all the years Gallego worked on his edifice, experts did not venture to advise them about this.

From 1961 on the building got more and more volume and in the end it became 50 m long, 25 m wide and 35 m high (164x82x115 ft). It included all the spaces that characterize a large (Catholic) ecclesiastical building, such as a central hall, a crypt, a cloister, but also a staircase, arcades, porches and spiral staircases. The towers are 70 m (230 ft) high.

A man of modest means, Gallego made up the construction by using all kinds of recuperated materials. For example, the towers were constructed by using old oil drums, filled up with concrete.


Some firms donated their obsolete and excess materials and volunteers would occasionally assist him.
The infrastructure for the cathedral's dome, a steel grid, was realized and put in place with the help of family members.
In the late 1990s Gallego got a co-worker, Angel Lopez, who assisted him every day.

The Spanish catholic church kept silent about Gallego's activities, which also goes for officials of architecture and Spain's artistic elite.

However, the creation attracted many visitors, the project got a lot of publicity in newspapers and on the internet and local public opinion public opinion was generally favorable regarding Don Justo and his activities.

Early February 2018 the ABC newspaper from Madrid reported that the city council of Mejorada del Campo unanimously supported a motion to initiate the procedure to designate the Cathedral as a Bien de Interés Cultural, which will imply a protected status. The local administrators will draw up a report on this matter and submit it to the Consejería de Cultura de la Comunidad de Madrid. 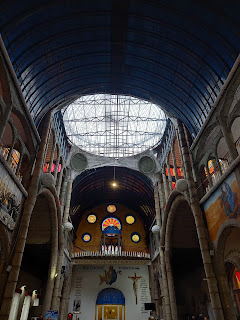 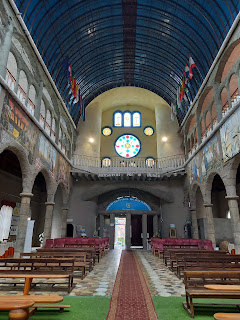 The future of the Cathedral seems assured
In the early months of 2021 Gallego was still working on his project, which meant that he had been active in building a cathedral for 60 years. But his health deteriorated and he realized that he would not be able to complete his project. Then Gallego succeeded in reaching an arrangement for further construction and preservation of the building.
In the month of November 2021, reports appeared in the Spanish press that Father Ángel, who is president of the organization Mensajeros de la Paz (Messengers of Peace) received the Cathedral as a donation, this with the intention of completing the construction.
In the preparations of this donation, architects examined the structural condition of the Cathedral and concluded that, now that four domes have  been removed due to overweight, the condition of the building in general is in good order. The structure of floors, pillars, stairs and walls is very solid.
The city council is awaiting a formal application to regulate the building permits for the cathedral, an application to be assessed by municipal technicians according to municipal rules.
Justo Gallego Martinez, whose health now was very weak, was pleased to know that, if this procedure goes well, Father Ángel is going to finish the project he started 60 years ago. He passed away in the early hours of Sunday, November 28, 2021. The authorities of Mejorada del Campo announced three days of mourning. 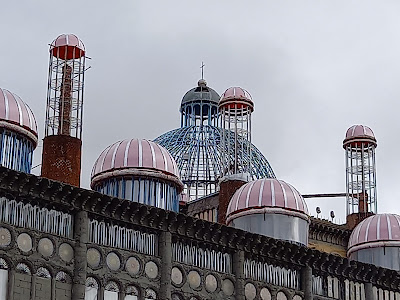 * The site got a scholarly review in: Jo Farb Hernandez, Singular Spaces. From the Eccentric to the Extraordinary in Spanish Art Environments, Seattle (Raw Vision, SPACES, San José State University), 2013. An abridged version is on the website of SPACES.
* Article by Blaise Perrin on his website, with a large series of photographs.
Video
* Video The lone man building a cathedral by hand  (subtitled in English, 2'27",  2016, YouTube)

* On YouTube many more videos about the Cathedral are available

visitors in general welcome
(only on the ground floor and with decent clothing)
Posted by henk van es at 4:43 PM