On the Italian beach of Lido di Volano along the Adriatic Sea, about 100 km south of Venice, is the spot where Enrico Menegatti made and displayed sculptures that he composed from washed up pieces of trees, mainly supplied by the river Po which flows into the sea a little north of the spot. 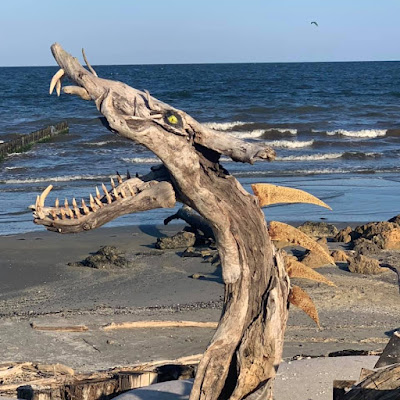 Life and works
Menegatti was born in 1955 in Codigoro, a municipality of some 13,000 inhabitants (2004) in the Ferrara department in the Emilia-Romagna region. The town is about 15 km inland from the Lido di Volano beach area.
After his primary education, he continued to live in Codigoro. His brother went to Milan in 1973 to study and as a young man Menegatti would have liked to attend an art school, but in order not to burden his family too much, he remained in his native region.
He married and formed a family with children, and he had a job as a diver for land reclamation. 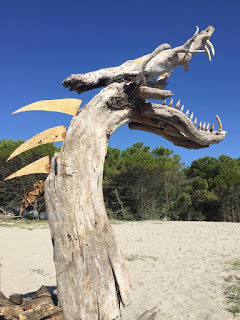 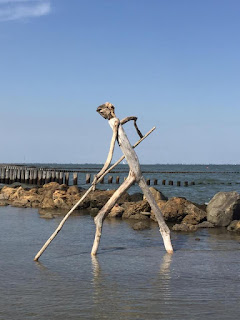 The project sculptures born from the sea started on a summer day in July 2015. He was then 60 years old and not yet retired.
Walking on the beach, Menegatti saw a piece of wood washed up, that looked like the snout of a life-size horse. A few meters away, between a pile of branches, he saw a leg, then another and also the tail.....
After an hour and a half of working in kind of an artistic trance, he had formed a complete horse, held together by rope that had also washed ashore 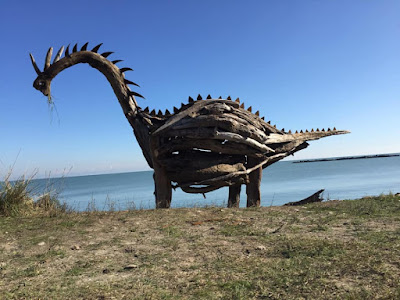 This was the beginning of a creative project for many years to come.What Menegatti experienced that day in July made him go to the beach to make sculptures every Saturday (he had a job during the week).
By the end of the summer of 2015, he had made twelve sculptures.
Menegatti's way of working is based on his belief that it is not he who directs what is to be created, but that some kind of superior force is taking the lead.
As he himself has said: I would speak of 'a hand from heaven' if I did not feel ridiculous; but I myself am in the end amazed at the finished work. 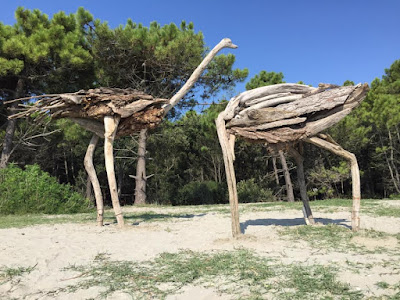 Menegatti and his driftwood sculptures became known as early as 2015, when a visiting couple took photos of the sculptures and posted them on Facebook. This resulted in many positive reactions, including a visit by a journalist from a newspaper.
There was also a less positive reaction, when in January 2016 sculptures were destroyed overnight and a month later another sculpture was set on fire, this accompanied by the display of a toy gun and a yellow "death risk" sign, as seen on power pylons.
The police installed a camera, and the images showed two masked men who visited the site at night, but remained unrecognizable. Menegatti was not deterred and continued his creative work. After the police's findings were made public and two exorcists had blessed the site, no further threats were made.
The destruction generally led to a lot of publicity, with one newspaper expressing the involvement of the inhabitants of Codigoro as follows: The vandals destroy and the Lombards reward. 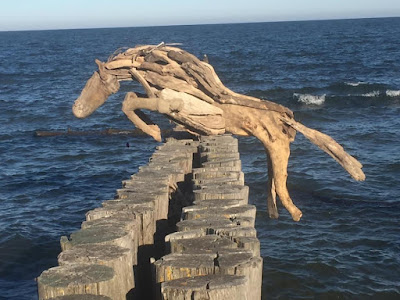 The sculptures that Menegatti made, using only driftwood and iron wire, were generally life-size.
He created a variety of sculptures of large animals, such as deer with bulky antlers, giraffes, crocodiles, horses and dinosaurs. But he also portrayed human characters, such as San Giorgio and the dragon and San Martino sharing his cloak with a poor man.
In the autumn of 2017, Menegatti's sculptures were exhibited in the park of the Pomposa Abbey, located about halfway between the Lido de Volano and Codigoro. A series of photos of the exhibition, made by Gaia Conventi, is available on Facebook.  After 2017, this park has also become the permanent location of Menegatti's collection. The spot on the beach no longer has that quality.
Also in the Garzaia di Codigoro, a nature reserve in Menegatti's residence, there is an arrangement of a number of Menegatti's sculptures. 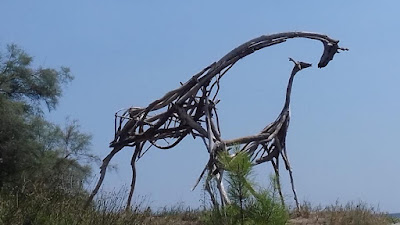 Enrico Menegatti
sculptures born from the sea
from 2015 during some years the collection was displayed on the beach of Lido di Volano,
Ferrara, region Emilia-Romagna, Italy
currently Menegatti's collection is displayed in the park of the Pomposa Abbey