The sculpture of a slightly cross-eyed person pictured above is part of a series of thirty stone sculptures arranged along a sculpture trail in a forest south of the Spanish village of Celrà. 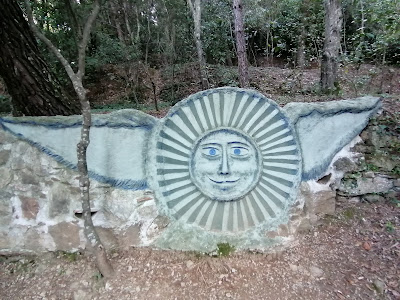 Celrà, a village with about 5000 inhabitants, is located in the Girona region of Catalonia, not far from Spain's border with France.
The sun, pictured above, has played a part in the official records of the village from the seventeenth century to the present day.. On the facade of the local church, completed in 1803, a sun symbol is attached. The sculpture in the forest also expresses the importance of the sun as a symbol for the community. 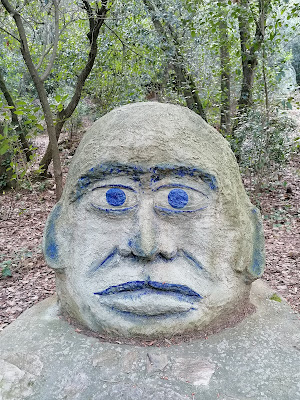 A rather unknown artist
Little is known about the artist who made these sculptures. He is referred to as Joan Carolà, and his full name is Joan Carolà i Ros. An indication of his date of birth is not available.
There is a video in the documentation about Joan Carolà Ros that presents his creations between 1991 and 2014, both paintings and sculptures. This video however doesn't  have specific information about the year in which the positioning of the sculptures in the forest started.
So there is just a global indication available of the period in which the sculptures were made. Around the turn of the century, seems an acceptable assumption. 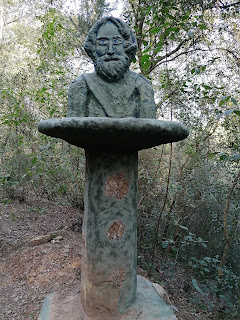 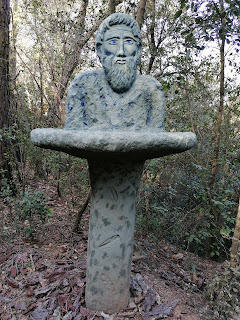 In an announcement of an exhibition at a gallery in Girona starting September 2021, Carolà is presented as someone who makes photographic compositions, under the name Yan Visuals. (Hashtag #yan_visuals on Instagram, pictures of the sculpture trail via #joancarola)
In a recent article (April 2022) about the sculptures he is ranked as an art brut artist 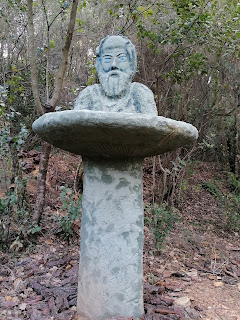 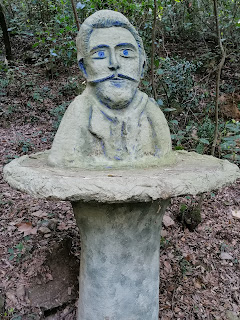 The ensemble of sculptures, displayed by Carolà along the trail in the woods for the most part includes depictions of human characters. The sun in the second image from above also has a human face. In the very first image, the halo returns, but then encircling a human head.
The four images above show a very different portrayal of human characters. The busts, placed on pedestals, are reminiscent of the faces of classical philosophers or other dignified persons. The pedestals seem to support the majesty of all these men. 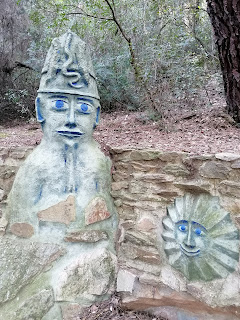 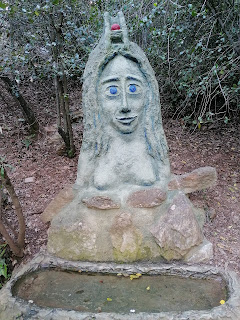 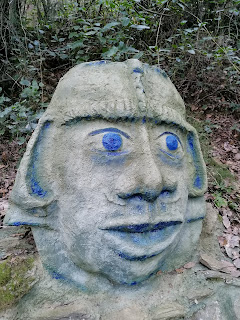 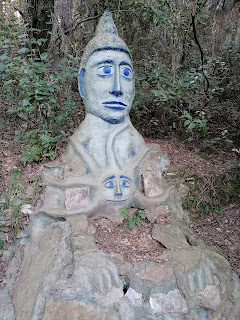 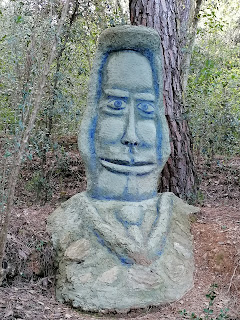 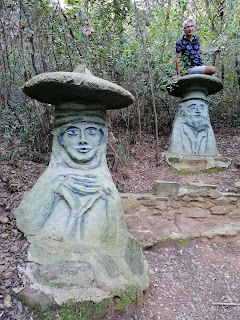 When comparing the four sculptures of the dignified busts of men resting on pedestals with the six sculptures of human characters above, it is noticeable that the four are depicted quite realistically, while the six have some non-realistic features.
In particular the large, wide-open eyes of some persons are noteworthy, but also the wide mouth of the gentleman above on the left and the voluminous hats of the persons above on the right.
It is possible that these six are personalities known in Spain, but in the absence of information on the internet about the background of the people depicted in the sculptures, this post should remain general. 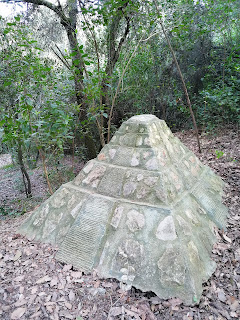 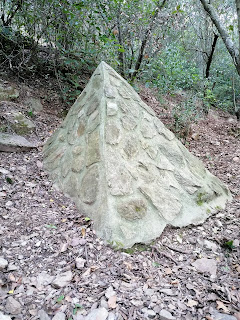 This also applies to the pyramids that line the sculpture trail and which seem to have unrecognizable decorative elements. These sculptures could refer to Mayan culture, but in the absence of background information, the guesswork remains.
Documentation
* Website Records del Moli (December 2018) with a note of sympathy to the creator of the sculptures
* Article on Josep de Tera y Camins' weblog about a walk in the Celrà area, with a series of photos of the sculptures
Videos
* Video (a series of stills) by Joan Ramon Anguera Gil (early 2022, YouTube, 3'24"), with explanatory text by Joan Marcet,

Joan Carolà Ros
Sculptures in the forest
in a forest near the community of Celrà, region Girona, Catalonia, Spain
can be visited  freely
streetview with the location of the trail
and a large series of photos
Posted by henk van es at 3:30 PM