In the east of Hungary, south of Lake Balaton, the municipality of Balatonboglár has become known for a special farm, called Bugaszeg. From a political point of view it is special that Bugaszeg has declared itself an independent Republic, seen from the field of art environments it is special that the area of the Republic is full of singular architecture.
Life and works
János Csere, the president of the republic and the creator of the extensive singular architecture, was born  in the late 1940s into a farming family in Balatonboglár
He developed into a special personality. teaching himself to play the piano and violin, even though he couldn't read music and acquiring a large collection of books and paintings. 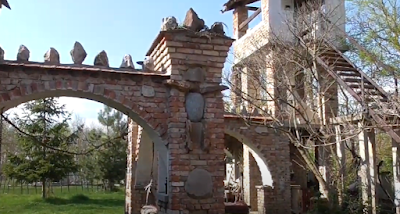 But also in his work as a winegrower and winemaker he did an excellent job. He was good with people, and because he knew a lot about plants, for the inhabitants of Balatonboglár. he became the consultant of choice with regard to garden maintenance.
There was an indication of his later activities as a builder of singular architecture. When he started building a chicken coop, the result was a structure that had more of the allure of an inn.
Building Bugaszeg Estate
As the turn of the century approached, Csere was able to purchase a three-acre piece of land, located in a quiet area outside of Balatonboglár. In this way he and his wife hoped to leave the complications of the worldly environment behind.
In the year 2000, when Csere was in his early 50s, he started to build the residential house on the acquired grounds.  He didn't mean to build anything special, but when for construction reasons he had to add a support, he got the idea to make something more special of the project.
It became a country house with the allure of a castle, three stories high, a cellar and an interior with corridors and large halls, a property referred to as Téglagaléria (Brick Gallery). 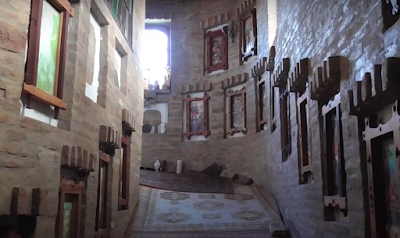 Indeed, the building functions as kind of a museum, because nowadays visitors have free access to (part of) the corridors and rooms.
The above image shows how the rather imposing hallways of the house were decorated with paintings collected by Csere in previous years.
The image below shows a part of Csere's collection of books, not housed in bookcases, but just lying loosely on desks, tables and the floor. The books range from Sartre, Nietzsche and Freud to publications on football and other popular sports. 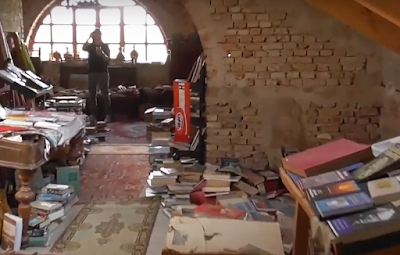 There is also a spacious dining room, with a large table, which can accommodate a large group of guests. It may happen that a group of visitors is welcomed here and has a meeting with Csere on the spot, who tells about his activities. 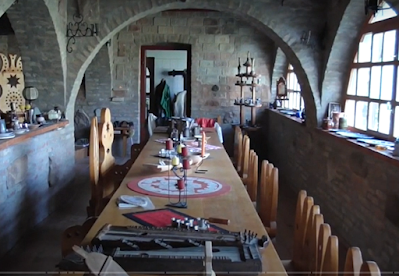 After the construction of the house,
more singular structures followed
Once Téglagaléria was built, Csere couldn't stop adding new structures to the site.
After ten years of work, in general using old stones and other material from demolished buildings, he didn't have to pay for, Csere had built up an estate with a variety of special forms of architecture, that broadly determined the character of the site as an art environment in the capacity of a singular architecture.
In the years that followed, to this day, Csere would continue to work on further detailing and development of the the built assortment that embellished the site.
Among the buildings Csere created, there are many towers, including a ten meter high bell tower. These towers are often interlinked in an inventive way.
The images in this post show that the various towery structures do not have a common shape, but often have their own decorative structure, with almost no tower being the same as another.
There are also some isolated high rising structures.
The image below shows the Trauma Gate, which  commemorates the losses suffered by Hungary. The tower stands on the edge of the site and the passage is closed with an iron gate.
Near this gate is a monument, as depicted in the image below. The creation pays tribute to Csere's father, about whom the caption says in capital letters: szerette a kosszarvu paprikát  (he loved chili peppers) 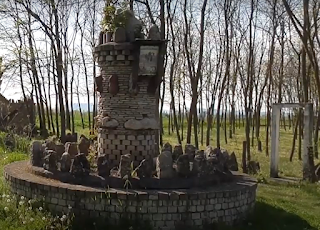 The site also includes two specific areas, sheltered by trees and separated by a single row of acacia sticks, one is called the Holt költők társasága (Dead Poets Society) and commemorates the great names of world literature and Hungarian literature, the other area, called Magyarok útja (The way of the Hungarians) is dedicated to important figures of Hungarian history. 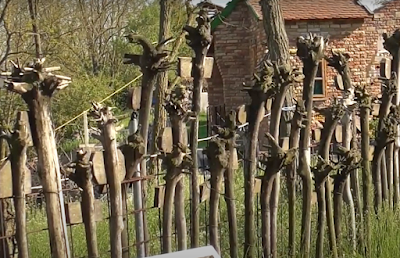 There are also facilities on the site where animals such as horses, sheep, rabbits and chickens are housed.  A stable houses mangalica piglets, a variety of pigs bred in Hungary, characterized by a thick, curly coat.
Vegetables and plants are grown in the Gecsemáné Garden, where one finds, as a sign says "almost all known Hungarian fruits and vegetables, from olive trees and green peas to poppies." 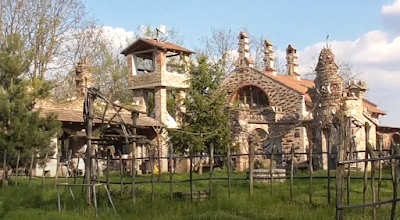 János Csere, the creator of this art environment, is a warm, hospitable but somewhat headstrong personality, who did not hesitate to declare the area that he himself transformed into a work of art as a Republic.

A letter of Csere written in 2015, requesting the European Union to recognize his territory as a state, went unanswered. The constitutional status of the site makes little difference to the many visitors to the site;  their appreciation for what they experience during their visit remains mostly very positive, as shown by the reactions published on Google Maps (see below)

Documentation
* The site on Facebook, with a variety of videos
* Article by Lásló Barkóczy (October 2018) on  website Sonline
* Article by Iván Viktória (May 2017) on website We Love Balaton
* Article on the website for tourists of the municipality of Balatonboglár
Videos
* On YouTube several videos about Csere and his site are available, mostly Hungarian spoken
* The video The words of Bugaszeg gospel (2017) by László Zadori (YouTube, 13'36") has subtitles in English

Bugaszeg Estate
Zrínyi utca 72.
8630 Balatonboglár, Hungary
visitors welcome, donation appreciated
Google maps refers to both the Gallery and the Republic; all together there
are thousands of photos from the site to see
Posted by henk van es at 4:05 PM