Dinnyés is a small community in Hungary with a few hundred permanent residents, part of the municipality of Gárdony. The village, located southwest of Budapest, has a lot of tourist potential.
This is partly due to the proximity of Lake Velence, and for  another part it is related to the presence of a two-hectare site with a display of miniatures of historic Hungarian castles, with a map as in the image below. 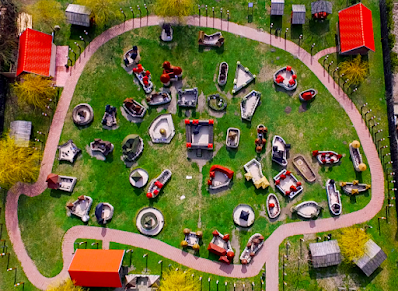 Life and works
This site, an art environment in the category miniature constructions and scenes, was created by Zoltán Alekszi.
Born in the 1970s in the city of Debrecen, as a child he dreamed of building a large castle for himself. When he became an adult, he settled in Budapest, where he started a business in the construction and maintenance of gardens and parks.
The thought of inhabiting a castle did not leave him, but Alekszi realized that it would remain a dream, and that he had better take a different approach with regard to castles in his native country.
When an illness prevented him from sustaining the effort of running his business, the idea took shape to create miniatures to demonstrate and record the history of the castles that had been established in Hungary over the centuries, many of which had disappeared. 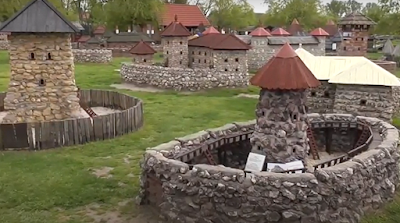 Alekszi read many books and articles on the subject, talked with archaeologists and experts and got familiar with data delivered during the excavations of sites of lost castles,
He also explored how to build a realistic scaled-down copy of these castles, because he wanted his miniatures to reflect the original as much as possible, both in form and in use of materials.
In 2012 Alekszi actually started making miniatures and then, located on a two hectare site he had acquired after careful search, the exhibition of miniature castles opened its doors in 2014. at that time presenting almost twenty creations. 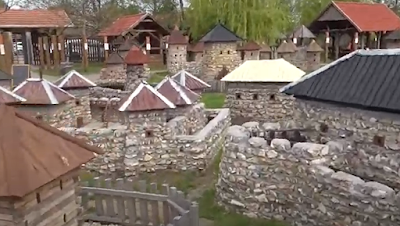 It is Alekszi's intention that the collection will eventually comprise 70 replicas. Currently (2022) some 44 replicas are ready.. Wikipedia has a list of the castles on display with their name and location
The second image from above in this article shows that the miniatures are surrounded by a footpath. This path marks the borders of historic Hungary. Each replica has a sign with a short explanation, if possible with an image of the castle, sometimes as it still exists, often only in the form of a heap of stones.
Alekszi's site is unique because the replicas as faithfully as possible reproduce the appearance of the castles, while they also have been constructed from the original materials, such as stone, brick, wood or earth.
Along the walking path are 90 poles, each of which is dedicated to a Hungarian dignitary (a king, a prince, a governor, etc) and pays attention to their most important deeds.
In addition to the replicas of the castles, there are other interesting exhibits. There is a Wall of the Saints, almost 300 meters long, with sculptures in memory of more than 600 saints. And in 2019, on an adjacent area an open-air museum was built, depicting a settlement from the time of the Árpáds, the ruling dynasty of Hungary from the 9th to the 12th century. There are buildings from that period, and scenes referring to crafts from that time, such as stonemason, fisherman, potter, leather worker and felt maker. 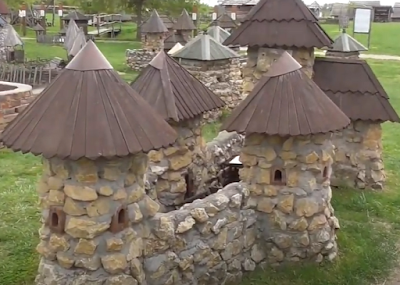 The exhibition has been included in the Guinness Book of Records in the years 2018-2021.
Documentation
* Website of the park
* Wikipedia
* Article by Szijjártó Gabriella (2019) on website Szabad Föld
Videos
* An early video (2015) by Gábor Nagy (YouTube, 3'12")