In Vyritsa, an urban community of some 12.000 inhabitants in Russia, some 60 km south of Saint Petersburg, a rather special art environment is located, referred to as Museum "Temple of Homer".
Life and works
This art environment includes the fully decorated interior of Yuri Antonov's apartment.
Antonov was born in 1947 in Vyritsa and after a relevant study and education he became a chemist by profession. 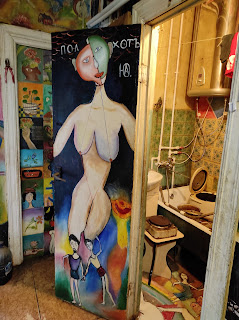 Although this is not mentioned in the available documentation, it is likely that he practiced this profession in Saint Petersburg, also until 1991 called Leningrad.
Clues to this are that it has been reported that Antonov spend a lot of time in the Hermitage library and that he befriended Nikolai "Kolya" Vasin (1945-2018), a native of Leningrad who became a big fan of the Beatles in the 1960s/70s.
Vasin collected many records and memorabilia, which he displayed in his apartment, that became kind of a museum named the John Lennon Temple of Love, Peace and Music.
Antonov had an artistic streak. He played music, wrote poems and in 1992, when he was already 45. he started making paintings, which soon got exhibitions in galleries.
In 2001 Antonov moved into an apartment in his hometown Vyritsa. Following the example of his friend Vasin, he transformed the two rooms of the apartment into a museum space by decorating all the walls and ceilings with frescoes and paintings he created himself.
Because of his great interest in the Greek classical ages, he named the museum Temple of Herod.
The images in this post give an impression of the way the walls are completely filled with mostly small-scale paintings, which often include references to paradise and the history of ancient Greece.
The ceilings are also decorated, for example with aliens and the god Hermes.
The documentation below has a reference to an article by Alena Bobrovich from October 2021, which includes a large number of images both of individual paintings by Antonov, as well as of the decorations of the walls and, in particular, the ceilings.
Documentation
* Entry on Facebook (December 2021) by Mary Artamonova
* Article (October 2021) in regional newspaper Metro by Alena Bobrovitsj
* The same article also in newspaper Bezformata
Video
* Video by с орода  (July 2018, YouTube, 1'31")