Denny Simonnet's outsider art manifests itself in several places in his daily environment, not only in his garden and his house (Musée du recyclage des déchets/Waste Recycling Museum), but also on stretches of dune area and beach near his house.

His multiple art environment was created in the community of l'Herbaudiére, located at the extreme point of the island of Noirmoutier in France, in front of the French coast, facing the Atlantic Ocean. 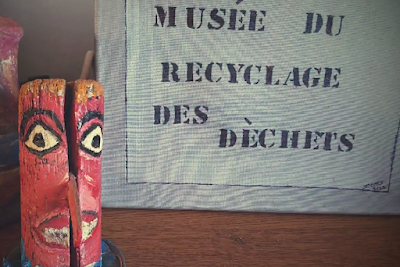 Denny Simonnet (May 28, 1965  - April 28, 2022) was born and grew up in l'Herbaudiére.
After his primary education he went to a vocational training for fishermen in Nantes (Hydro Nantes), after which he could join the fishing by professionals as a lieutenant de pêche (fishing lieutenant).
He married and got a son and a daughter.
In 1995, when he was about 30 years old, he was struck by an illness, which prevented him from further practicing the profession of fisherman. He was declared unfit for work and had to give up his job as a fisherman and other professional activities.
In order to have a meaningful daytime activity, Simonnet started making creations from driftwood that could be found on the beach near his home. He became known as the sculptor of the sea,. Using simple tools and paint meant to maintain ships, he transformed the washed up chunks of wood into a variety of works of art. 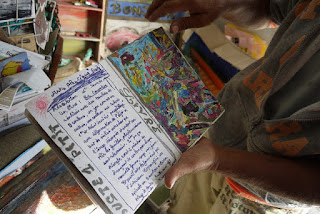 Simonnet also collected all kinds of materials that he used to transform his house into a Waste Recycling Museum. And he created many drawings and paintings.
The images above and the drawing below give some impression of Simonnet's artistic activities in this vein.
Simonnet's sculptures
Due to their number, size and manner of processing and presentation, the sculptures made by Simonnet form an eye-catching part of his artistic activities.
The location where the sculptures are placed is also important. Simonnet's house is located at the end of a side street that ends at the beach and so there is an open connection between the area around he house and the beach.
The sculptures  are displayed both in the garden of the house and in the area between the house and the sea. 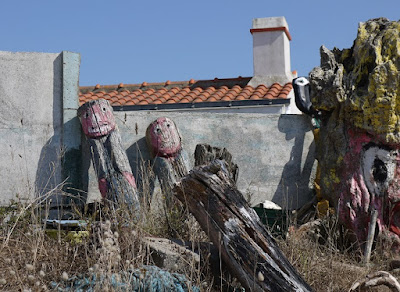 The images in this post depict the sculptures mainly in a standing position, but Simonnet also made many sculptures that were placed in a lying shape.
For example, an image (2013) on Streetview shows that in front of Simonnet's house a number of sculptures are just lying on the street.
As above picture shows, the garden of the house as such, was not very orderly, but looked more like a workshop, with sculptures still in need of work, a way of presentation that is an extension of the presentation in the Waste Recycling Museum indoors. 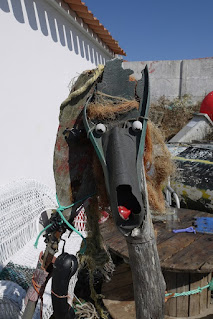 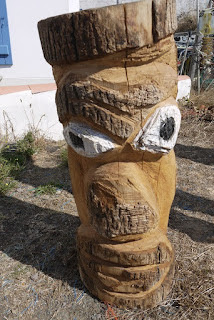 The totems that adorn the toad to the beach (first image) have been worked with pruning shears and paint in such a way that, in particular, a man's head covered with a headgear appears on an otherwise unfinished pole.
Due to the color scheme and the manner of arrangement the setup makes a heroic impression.
The four small-scale characters depicted around this text are also all of masculine character and have an appearance, with a piercing gaze and a specific look as if they were battered by life. 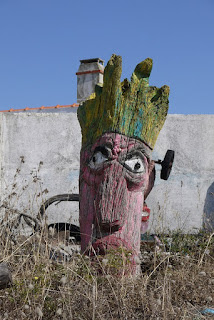 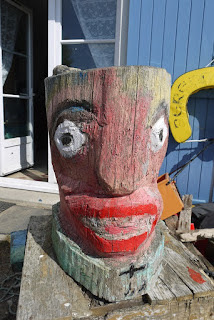 Simonnet also worked with textiles. He made colorful bags from washed up oyster bags, filling the holes with small objects found on the beach.
He had also started embroidering scenes on a large cloth panel.
Simonnet's creations have not gone unnoticed by galleries along the French west coast. He had several exhibitions ranging from Saint Malo to La Rochelle. The first video below has scenes of an exposition in 2015.
Denny Simonnet passed away on April 28, 2022 at the age of 56. The news came to all who heard about it, much, much too soon....
Documentation
* Article (December 2016) on the weblog of Sophie Lepetit, with a variety of pictures
* Page  "Le sculpteur des mers" on Facebook, with a lot of pictures
Videos
* Video (0.37, Facebook) of an exposition in 2015 when Simonnet was an artist for 20 years (May 14-20, 2015, Salorges, Noirmoutoir-en-l'Ile), an impression of his paintings and sculptures