The old park is the original designation of an art environment that through numerous forms of architecture shows how much human culture is one and universal. This is manifested by the site, located in Kabardinka, Russia, on the coast of the Black Sea, which is filled with a variety of architectural items, all single-handedly created by Aleksander Alekseeva.
Life and works
Alexander Ivanovich Alekseeva saw himself as a writer from an early age and he already wrote adventure stories at the age of 10. After his primary schooling, he was trained as a gymnastics teacher, and, having completed his military service, he entered Rostov University, where he studied at the journalism faculty and became interested in philosophical literature.
After graduating in 1983, he was a journalist for several years, until in 1990 his parents asked him to assist them in the difficult time that perestroika brought them. In the village of Kabardinka where they lived, Alexander and his brother managed to set up a farm with a 20 ha site and gradually they overcame the problems.
In 1994 Aleksander, using simple tools, processed a piece of marble into a sculpture of Voltaire, in this way entering a new, creative period. In the following years he made more sculptures and also a model of the pyramid of Cheops and a copy of the Sfynx.
This was the beginning of the construction of a site presenting cultural traditions in various countries,  The Old Park, which would develop from around the year 1996 on a part of one hectare of the twenty hectares of land of his parents' farm.
.
In 2004 the Temple of Zeus, as pictured above, with Aphrodite and Galatea, was built, completing the section dedicated to the classical antiquity of Egypt and Greece.
In 2006 the park was officially opened for the public 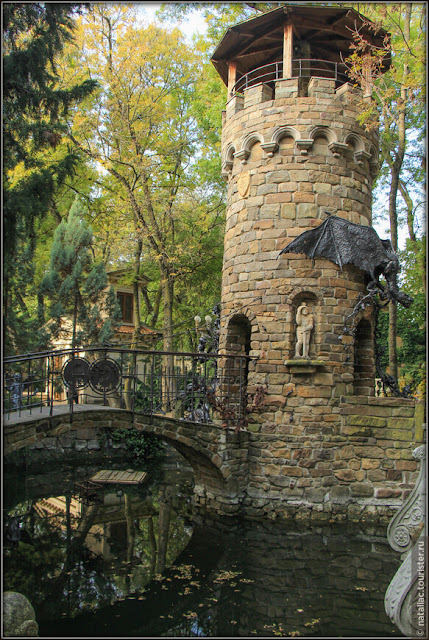 The period of the Middle Ages is manifested by a stone watchtower with a stone bridge, located over a pond that represents a moat.
The vantage point at the top can be reached via an internal spiral staircase. 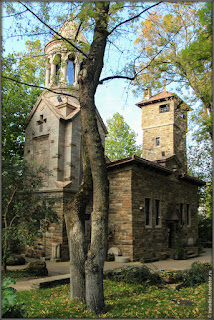 Several other architectural creations followed, such as the House of the Caucasus (above left), which includes a museum that displays all kinds of things like weapons and hauberk. Another museum houses a large collection of paintings, collected by Alekseeva over the years.
Above right is an image of the chapel of Saint Nicolas, made in 2010. 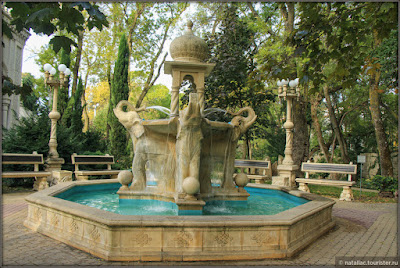 There is also an ensemble focused on the Orient, with the House of the East, a Japanese corner and the aqueduct.
Part of it is the Indian fountain, pictured above. with four elephants, with their surf up, facing the four cardinal directions, holding a bowl of running water and a traditional Indian turret. 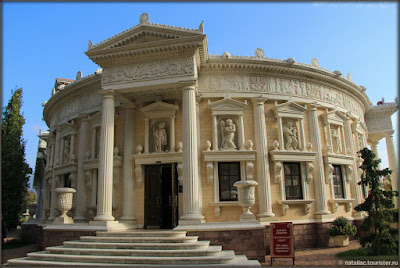 In 2013, Alekseeva for the first time had the idea to realize a theater. The project was started indeed and completed in 2017, an antique-style building with a 150-person theater hall, the first private theater in Russia, very suitable for small scale musical performances and plays.
And last but not least
In the above,  in a somewhat quick manner, a first impression has been given of a number of architectural creations that adorn the Old Park. Much had to be left unspoken, such as the lush growth of plants and flowers, which give the site a calm, beneficial atmosphere.
And also, all kinds of details of the buildings were not discussed.
Hopefully the textual and visual information given in the article is sufficient to make clear what a special art environment this is, in terms of thematics, architectural design and perseverance of the non-professional artist who made all this.
And the plans for the future are already there. Alekseeva plans to add replicas of famous buildings from Russia.
Selected documentation
* Article (January 2021) by Natalia Semchina, "The old park in Kabardinka - history, content and meaning", on website Tourister, with a series of photos
* Article (circa 2016) by Yuta Arbatskaya and Konstantin Vikhlyaev, with photos and a detailed description of the site
* Interview with Alexander Alekseev (October 2018) by Vladimir Nordvik on website RG.RU
Video
* Video (2019, 57'22", YouTube) with a detailed view of all parts of the park and Alexander Alekseev giving an explanation