The scene with Snow White and the Seven Dwarfs was created by Edouard Erhart (1928-2009). who lived in Bruebach, a village of about 1,000 inhabitants in the south of the Alsace in France, near its border with Switzerland. 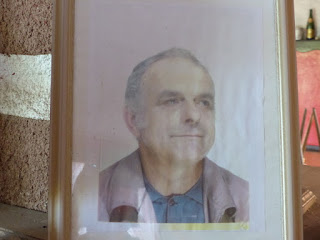 Life and works
The photo above by Sophie Lepetit shows a portrait of Edouard Erhart that hangs on a wall in the house where his wife still lives.
It's a portrait of a man with a determined character. Born as the eldest in a family with seven children  that struggled materially, he dreamed of acquiring his own paradise in Bruebach. So once an adult, he would not go on holiday for years to save money in order to buy plots of land. 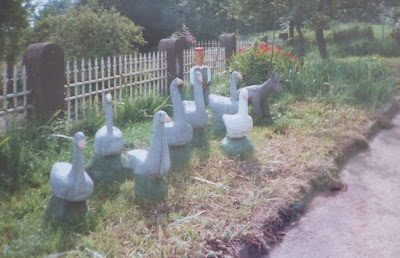 Young Edouard was only sixteen years old when in 1945, after Germany had lost World War II, he enlisted in the French army, which was then a temporary occupying force in the part of Germany bordering France.
From 1947 to 1949 he had a job as an underground miner in the potash mines of Alsace, for which he had to cycle about 40 kilometers a day.
Then he learned the butcher trade from an uncle, and he would work for about forty years in butcher shops and slaughterhouses in France and, just across the border, in Switzerland, 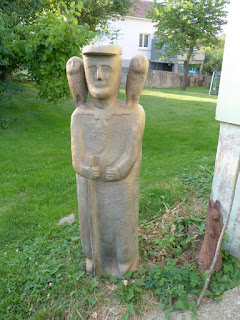 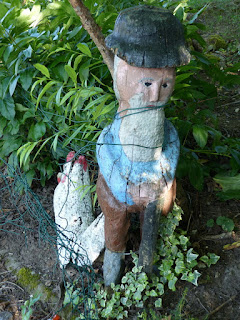 Erhart married in September 1955 after he had built his own house and furnished it with chairs, tables and the like that he had also made himself. The couple would have three children.
Decorating home and garden
Building and furnishing his own house also marks the moment where the story begins of the various art environments Erhart created.
Once he had planted a garden with a pond around his house, the desire arose to provide this garden with self-made wooden sculptures. 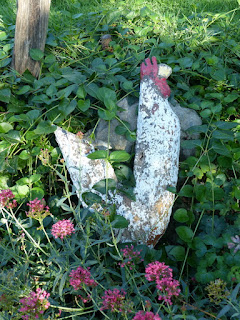 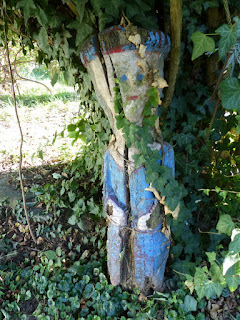 Like so many non-professional sculptors, he could see in a log or similar piece of wood the character hidden there, which he just had to free from the wood, so to speak. 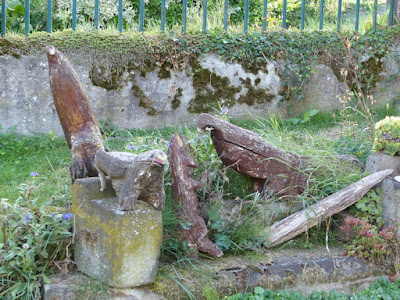 As the pictures in this post show, Erhart populated the garden with a significant number of sculptures, including many depictions of animals such as squirrels, lemurs, bears, owls, swans, crocodiles, goats, dogs, rhinoceroses, penguins, panthers, wolves, foxes, kangaroos and birds.
But he also portrayed princesses and dwarfs, all kinds of fairytale characters. famous people from Alsace, accordionists, a whole range indeed.
The creations were painted in appropriate colours. Not all of the many wooden sculptures Erhart installed in his garden have withstood the test of time, but many scenes have been captured on photos. 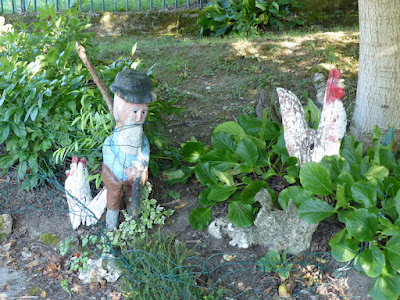 Creations in the interior
In the 1990s Erhart -who had retired in the mid 1980s- also began to furnish a spacious interior room with sculptures.
There was a specific reason for that. A daughter of Erhart who had become a ceramist had made a nativity scene for the parish church in the village and, inspired by this, Erhart wanted to realize something similar indoors. 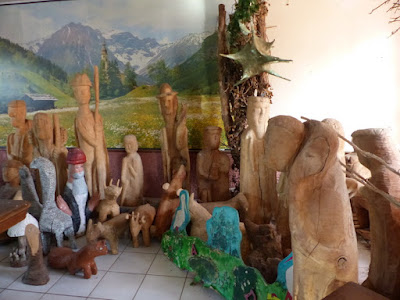 The nativity scene (no images available) includes the usual characters, such as the Virgin Mary, Joseph, the newly born Jesus, shepherds and the three wise men.
In addition to the Christmas scene, there are other characters, all together some forty sculptures.
Compared to the characters in the garden, the sculptures of the human characters in the interior room are made on a more human scale. 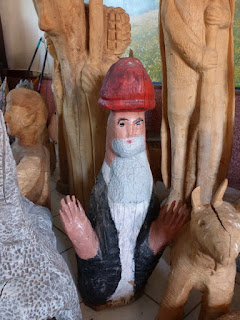 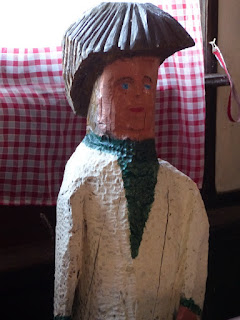 Sculptures on a site a little further away of the house 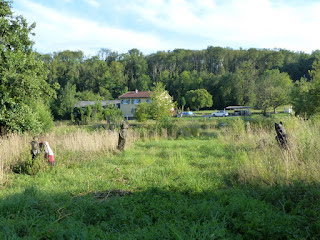 In addition to the plot of land on which he was to build his house, Erhart also bought plots of land elsewhere in Bruebach.
If I have understood correctly, the entrance to these plots was marked by two rather large, sturdy wooden sculptures, as if figuring as guards. 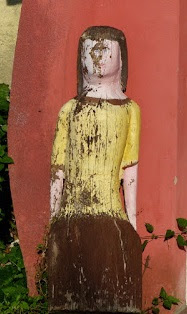 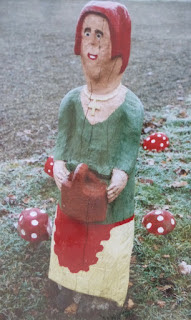 The surrounding images give an impression of such a plot of land, some distance from Erhart's house, as well as of the sculptures that (still) decorate the site.
The sculpture above left already shows signs of decay, which is not surprising for wooden sculptures that are outside and not maintained.
The image above right shows Little Red Riding Hood. 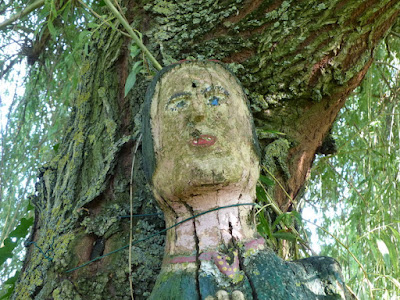 sculptures in the garden of the house can be seen from the street
streetview
Posted by henk van es at 3:24 PM