The images in this post show some of the wooden sculptures in the sculpture garden of Pekka Lampinen, Finland, as they still stood there in 2022. At that time. more than a decade after Lampinen's death, many sculptures had deteriorated and those still in reasonable condition were taken to safety.
Life and works
Pekka Lampinen (1931-2011) had a busy job and only got the opportunity to pursue visual arts and woodworking at a later age, when he, in his early fifties, in 1983 joined the art circle in his hometown Aura, a community in the coastal area in the south-west of Finland.
Lampinen made various reliefs in wood and his favorite was a moving work entitled Viimeinen menettäminen (The last loss), in which he depicts his father in military uniform, saying goodbye to his two sons to join the Finnish army in the winter of 1939 in the war that Russia had started with Finland .
His father would never return from that war and young Lampinen was orphaned before he was ten years old.

Not all of Lampinen's works had that sad connotation.
Certainly in the late 1990s, when Lampinen was retired, he took great pleasure in making dozens of wood sculptures and paintings.
He built a barn in his backyard, where his paintings were displayed and the garden was transformed into an art environment with numerous wooden sculptures, often in the form of totems, but also sculptures of all kinds of animals and famous people from the village, such as a police officer, a pharmacist and a priest.
It became a whole world of all together some 120 sculptures spread out in his garden, where visitors were warmly welcome to view the collection. 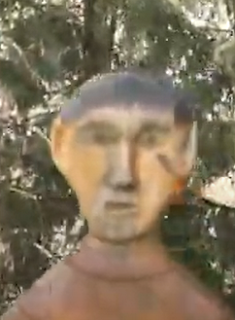 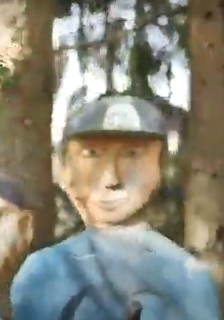 Lampinen became nationally known in Finland as an ITE artist after in the years 2002-2004 a research project took place into the occurrence of outsider art in the province of Varinais-Suomi.
His work was subsequently displayed in the Kiasma Museum in Helsinki and it could also be seen in 2006 in Paris at the exhibition Esprit de la Forêt (Spirit of the Forest) at the Halle Saint Pierre, where one could see a number of totems he had created.
After Lampinen passed away in 2011, the wooden sculptures in the backyard have been neglected for a number of years. The available documentation on the internet provides no background information in this regard.
Action was taken in the summer of 2022, when Pertti Riikonen and Teijo Monni from the Design Spot organization visited the site, when part of the creations in Lampinen's estate had been donated to this organization.
Those creations that at that time were still in good condition, were recovered. On that occasion, the short video, which is included in the documentation below, was also made. Some screen prints from this video illustrate this article. 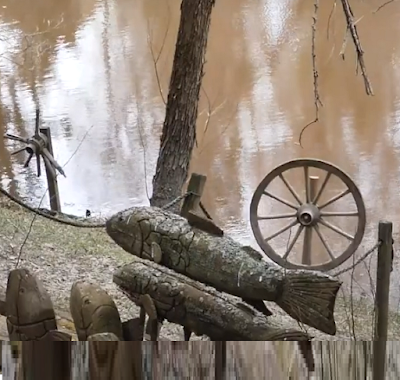 Documentation
* Article about Pekka Lampinen by Teijo Monni and Pertti Riikonen on the website of Maaseudun Sivistysliitto MSL (Rural Culture Association MSL), Finland, with a number of photos.
* Article (2006) in newspaper Turun Sanomat about the exposition in Paris
Video
* Video (0'59", YouTube, 2022) by Pertti Riikonen and Teijo Monni