The image above offers a view of the house of Evgeny Smolik located in Irbeysky, a rural community with some 1100 inhabitants, one of 43 administrative units in the Krasnoyarsk region of the Asian part of Russia ¹.
With its covered entrance and specific roof structure, the building resembles a small church or chapel, but if Smolik built his house himself, as is not unusual in the Russian countryside, this design can also be seen as an expression of his creative attitude.
Anyway, this attitude can be seen very clearly in the decorations Smolik has added to the fence around the house.
The image above shows the fence, probably a part on the backside, with a door leading to an entrance of the house, which has been decorated with a depiction of Adam, Eve and the serpent.
The image below shows another part of the fence, perhaps located along the street because of the decorated letterbox on the right. This fence is also richly decorated, including angel-like characters equipped with spears on the left and right of the door, guarding the decorated entrance.
Life and works
As for Evgeny Dmitrievich Smolik, there is no orderly biography available on the internet. He was born  in a community in the Krasnoyarsk region, presumably in 1958.
After school, he completed his military service in Kamchatka in Russia's Far East, home to Russia's Pacific submarine fleet, before returning to his native region and settling in Irbeysky; where he had all kinds of jobs, such as electrician, concrete worker, but also photo reporter and graphic designer.
It isn't clear when it was, but at some moment Smolik came into contact with someone who worked wood in a creative way. This appealed to him and he started working as an autodidact sculptor himself. As a self-taught artist. he would devote further life to woodcarving
He became an enthusiastic worker, taking care of everything that could be decorated with carvings.
Not only the outside of his house was tackled, as already outlined above, nothing in the interior was also untouched.
There are large decorated panels, all kinds of decorated medallions and wooden sculptures, but also kitchen utensils and tables, chairs and cabinets were creatively worked.
A clock on the wall in the bedroom is not just decorated with some motifs, but includes a carved portrait of Czar Peter the Great (1672-1725). 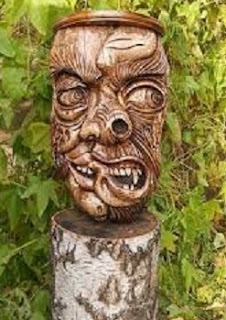 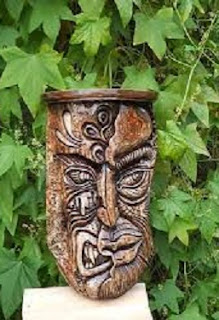 Smolik also had a personal sense of humour, what entailed for example that he made birdhouses with gloomy pirate faces, as in the examples above.
These and similar small-scale creations were intended for sale. For example, they were offered on the Artsphera website. 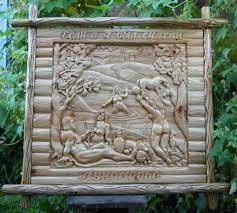 Other works of art by Smolik, intended for sale, had a more classical appearance, as can be seen in the above scene.
It is unclear to what extent Smolik's individual works of art have been included in an art museum.
However, the chair as shown above, a luxurious wooden chair, carved from pine wood and decorated with intricate carvings, has been acquired by a museum, namely the Forest Museum in Krasnoyarsk, the capital of the region of the same name.
Documentation
* Article (November 2019) in newspaper HKK
* Article (March 2012) in Livejournal
* Article (May 2007) in newspaper Gazeta
* Website Artsphera, with pictures of Smolik's artworks
note
¹ The reviews in this weblog relate to  art environments in Europe. Nevertheless, characteristic sites in the Asian part of the Russian Federation are also included, in order to give a balanced and coherent picture of the entire field of Russian art environments.
Evgeny Smolik
House decorated with wood carving
Irbeysky District, region Krasnoyarsk, Russia
exterior decorations can be seen from the street
Posted by henk van es at 3:02 PM