Surrounded by rolling green hills, the city of Limoges in south-west France, some 400 km south of Paris, is known for its production of Limoges Porcelain, a hard-paste porcelain produced in factories around the city.
Jean-Marie Pidou, the protagonist of this article, lived in a hamlet 18 km east of Limoges and all his professional life he was a decorator of porcelain products, working in a factory in Saint-Léonard, some 5 km from his home. 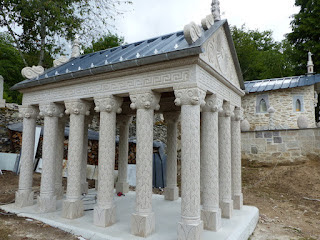 Life and works
The hamlet where Jean-Marie Pidou lived, named Saint Nicolas, is part of the municipality of La Geneytouse with all together some 975 inhabitants. Because of the name of that place of residence, Pidou was also known as Jean-Marie de Saint Nicolas.
Jean-Marie used a bicycle to go to his work, but also to make longer trips through the region to photograph scenes that he would capture in a painting at home.
Performing such artistic activity occupied an important place in his life
This was also clearly expressed when, after his father's death, he inherited the granite quarry that his father had exploited for years. With no training in sculpting at all, in 1981 he embarked on a project to transform the grounds near the house into a sculpture garden.
After about a quarter of a century of carving, he had made some 140 sculptures of Limousin granite, a material with a white appearance as the images show. 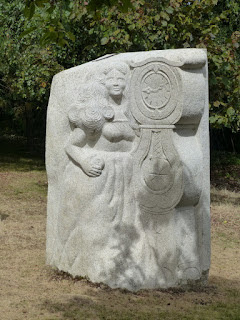 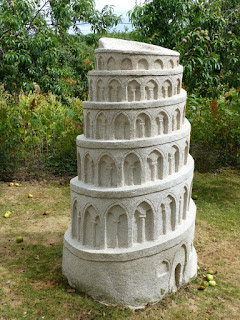 The generally man-sized sculptures include all kinds of different representations, such as animal figures, sometimes with political puns, various female characters, whether or not inspired by mythological creatures, but also images of religious buildings, Celtic menhirs and other structures.
The surrounding images only give a limited impression of the variety of the creations.
Neither can the appearance be depicted here which radiates from the collection of sculptures as a whole, set up on a sloping site as it is, with a view on the more eastern Vassivière mountains, 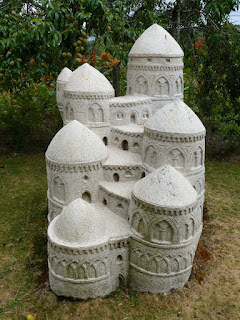 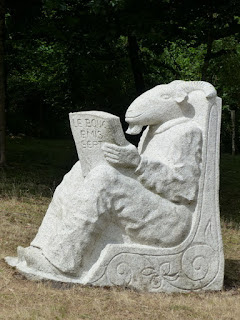 Once the collection of sculptures was more or less voluminous in size, Pidou began to create structures that could make the stay even more enjoyable for visitors, such as a studio where his paintings could be viewed (and eventually purchased), a Greek temple-like building for visitors to pause (Temple de Léonard) and a seven-meter high tower (Tour de Jeanne) from which one gets a beautiful view of the entire art environment, and Pidou's herd of sheep roaming freely.
A guided tour provided by Pidou for visitors can last an hour and a half, part of which is devoted to an explanation and discussion on topics close to Pidou's heart, such as dietetics, metaphysics, geobiology and aura measurements, which can be arranged on site if desired. 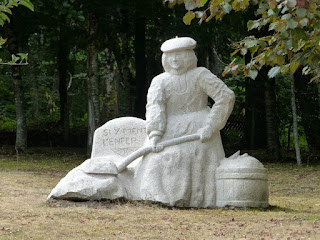 Documentation
* Weblog (August 2022) of Sophie Lepetit with a variety of images
* Article about Pidou and his creations on website Art & Patrimoine
* Article about the site on the website of the Tourist Office of Noblat
* Article on the HenriTrip website with some photos and route map
* Article (May 2021) on the website of regional journal Le Populaire du Centre
* Article on the touristic website Haute Vienne with photos of the architecture in particular
Video
* Video (3'28", YouTube, undated) by France 3 Nouvelle Aquitaine
Jean-Marie Pidou
(also known as Jean-Marie de Saint Nicolas)
Initiatic Stones of Saint-Nicolas
208 Route De La Porcelaine (=D65)
87400 Saint Nicolas, La Geneytouse, dept Haute-Vienne, region Nouvelle-Aquitaine, France
open for visitors in July and August, 14-17 hrs
other months on Sundays, 14-17 hrs, on appointment
Posted by henk van es at 5:22 PM

Email ThisBlogThis!Share to TwitterShare to FacebookShare to Pinterest
Labels: garden with sculptures from stone, singular architecture