Created by Jacky Aymon, a retired carpenter-cabinetmaker, the above collection of wooden sculptures, is located in Valencisse, a community of some 2300 inhabitants, about 10 km east of the city of Blois along the river Loire in France.

In earlier years, the sculpted totem poles formed an arrangement of thunyas, kind of conifers that, as can be seen from the image, can provide a beautiful, closed fence.
Gradually, however, the greenery was lost and only the bare trunks, remained, almost in line, as if forming a procession or parade.
For Jacky Aymon, the owner of the fenced area, the row of tree stumps offered the opportunity to draw attention to a municipal decision he did not agree with.
A series of municipal mergers
The decision in question concerned the merger of the independent municipalities of Molineuf and Orchaise, which was taken in the course of 2015 and resulted in the origin of the municipality of Valencisse on 1 January 2016. 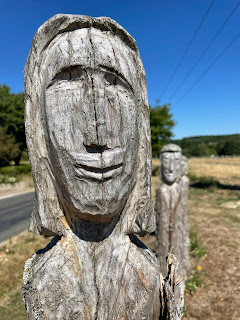 To publicly show that he did not agree with the merger of these two villages, Jack Aymon in 2016, with a chainsaw and a grinder transformed the tree stumps into totems.
On a panel he explained his view on the merger.
He says there that he understands that these mergers fit the spirit of the times, but that he wonders if they have any benefit. However, that the decision was taken without any consultation of the residents. disturbed him the most. As he says in the panel: Où le bât blesse, c'est ce que cette entente s'est faite en catimini (Where the shoe pinches is that this agreement was made on the sly).
Incidentally, Aymon also mentions that on January 1, 2017, the former municipality of Chambon-sur-Cisse also merged into Valencisse and that the relevant decision was taken after consultation with the residents. 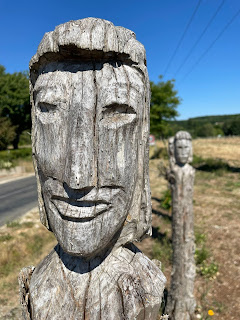 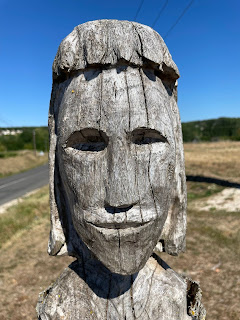 The ensemble of totems includes about twenty figures, each with its own facial expression, but all almost identical in posture, except for the totem at the front of the procession, that carries a staff and points the direction.
On the panel Amyon also says that in order to understand everything properly, one must know that Molineuf in past times was called Saint Secondin, because of a beautiful 12th century church Saint Secondin des Vignes, located somewhat outside Molineuf in the middle of vineyards. 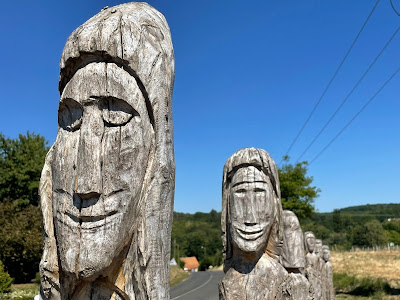 This church has a warm place in the hearts of Molineuf's inhabitants.
The first photo in this article shows that the foreman of the procession of totems is leading the way  As Amyon's panel notes, the church is the target to which the group moves.
Allégrement (cheerfully), as Aymon says.
Documentation
* Entry on the Facebook page of Artension, with a series of pictures
Jacky Amyon
Procession of carved totems
Valenaisse, dept Loir-et-Cher, region Centre-Val de Loire, France
decorated totems can be seen from the road
Posted by henk van es at 3:42 PM