There are non-professionals who create miniature structures with the intention that all those creations represent a community, usually a village, such as Pierre Bouvarel (Ron des Fades) or Henri Galtier (Occitan Village). Their creations are of course set up in an outdoor area.
There are also non-professional artists who create miniatures from a specific, personal point of view, such as Willem van Genk, who made an extensive collection of buses, fascinated as he was in (nodes of) transport, or Gerald Dalton who, because of his great interest in palaces, castles and stately homes, especially made miniatures in that genre. Such creations are mostly set up indoors.
Life and works
Robert Goudergues (1937-2017) belongs to the second category. His creative work is driven by the inner need to pay tribute to the architectural heritage of the French department Cantal, his native area.
He was born in the small community of Lacapelle-del-Fraisse, about 25 km south of Aurillac, where he would move when he was 17 years old. He first had a job with a trading firm, and in the 1970s he joined a company that made supplies for shoemakers.
This company ceased to exist five years before the date Goudergues would have formally retired, so he was out of work in the mid 1990s at age 57. For Goudergues this was the time to start making wooden miniatures. 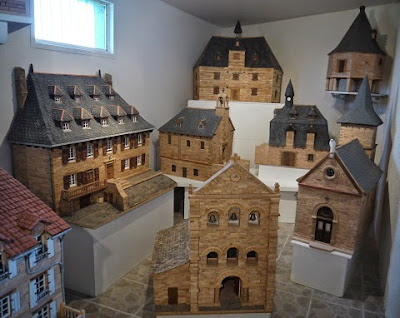 .
Working in the garage belonging to his home, he has been making wooden miniatures of buildings in his native region for around twenty years.
Technically speaking, he worked on a scale of 1:15 or 1:19, carefully considering the appearance in reality of the buildings he replicated. To get a realistic miniature he also studied images of his subject.
In general Goudergues made stand-alone creations, and each miniature took about four to five months of work. The four meter long miniature of the row of traditional houses along the Jordanne River in Aurillac, an ensemble he also made, took him a year and a half (image at the top of this article)

Goudergues used all kinds of wood from discarded objects, such as pieces of chestnut wood or the bottoms of crates. He also found special ways of modelling, for example the red tiles and the ridges of some buildings he made from elderberries cut in half.

All together he made some 40 miniatures of castles, churches, famous buildings and all kinds of houses, but also smaller items such as fountains.

Robert Goudergues and the Musée de Veinazès
Located in Lacapelle-del-Fraisse, the native village of Goudergues, the Musée de Veinazès is a private project, undertaken on the initiative of Raymond Coste, an inhabitant of the village.
Opened on June 27, 2003, the museum focused in its early years on the technical development of regional agriculture between 1880 and 1970 (including a display of all kinds of tractors), and it showed  a number of craft workshops, also from the region like a clog-maker's business (around 1930) and a carpenter's workshop (around 1922), all fully in operation after restoration.
In later years, when Raymond's son Bernard Coste took charge, the museum also began to focus on regional contemporary folk art. For example, after the death of Rene Delrieu in 2008, part of his art environment was included in the museum.
From 2010-2012 the museum had a temporary exhibition of Goudergues' miniatures.
Also because the space in Goudergues house was too tight to accommodate all his creations, he and his wife Lucienne decided to donate the collection to the museum and in 2013 some 40 miniatures became part of the museum's permanent collection. To this end, a space was added to the museum. 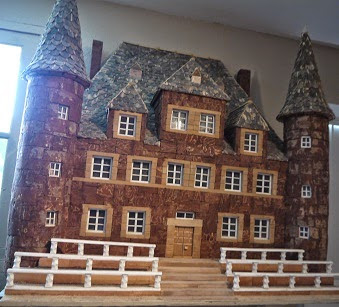 The museum shows how initiatives at a regional level can make an important contribution to the preservation of artworks and art environments by non-professionals
Robert Goudergues passed away on March 2, 2017 and if the museum hadn't been there, his creations could have been lost.
Documentation
* Website of the Museum
* Weblog (April 2014) of Sophie Lepetit with a series of photos
* Article (May 2013) in newspaper La Montagne on the occasion of the opening of a new space in the museum for the collection of Goudergues
* Booklet in the series Rencontres en Veinazès (Encounters in Veinazès) published by the museum: Robert Goudergues, l'Architecte des chutes de bois (The architect of scrap wood) (available at the museum)
Video
* Video (undated, 3'15", YouTube) by Un Moment Avec with a presentation of the museum (shots of Goudergues' miniatures start at 2'05")