Above picture, courtesy of the departmental archives of Cantal, shows the decorated garden of René Delrieu (1930-2008), who lived in the small community of Ally in the Auvergne area in France.

Delrieu was a blacksmith, who later in life became a mechanic of agricultural machinery. When retired, around 1994, he began embellishing the garden in front of his house.
He made installations and sculptures from sheet metal and added frescoes to the exterior wall of the house, such as the scene on the picture below that depicts a shoe smith at work. 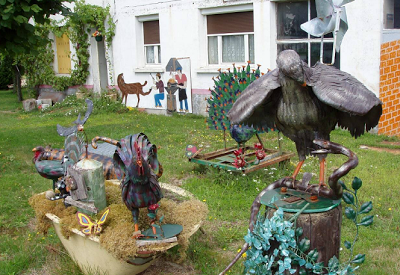 A number of his creations have been performed two-dimensional, using sheet-metal, such as the scene of a horse race, painted in lively colors and attached to the wired fence of the garden. 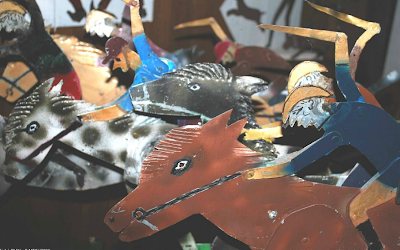 This small, but enjoyable ensemble can no longer be viewed in situ. After Delrieu died and his house was sold, the collection found its way to various interested parties, among whom the Musée de Veinazès, located in La Capelle-del-Fraisse.

This private museum in the Auvergne area was founded in the early years of the 21st century by Raymond Coste in order to exhibit his collection of traditional agricultural machinery and utensils used in traditional crafts.

His son Bernard Coste, who partnered his father in running the museum, is quite interested in folk and irregular art, so around 2010 the museum opened a new department with creations in this field.

It nowadays exhibits part of René Delrieu's creations. Bernard Coste also took care to make pictures of the Delrieu site (in 2006), a collection he donated to the archives of the Cantal department.

A new acquisition (2013) of the museum, enriching this department,  is the collection of wooden replicas of old buildings, wash houses,  churches, rows of houses, etc. made during the last twenty years by Robert Goudergues (1937-2017).
Above story is also a tribute to the potential on a regional level of private parties which are active in safeguarding artistic, artisanal and traditional heritage.

Documentation
* Facebook page of the museum
* Article about Delrieu on the website of the museum
* Weblog of Bruno Montpied (June 2013), with a text about the museum and a text about René Delrieu (with more pictures)
* On the weblog of Sophie Lepetit (April 3, 2014) the story of René Delrieu with a variety of pictures
first published June 2013, last revised January 2022
René Delrieu
Jardin décoré
Ally, Cantal, France
the decorated garden doesn't exist anymore,
but a part of the creations is exhibited in:
Musée de Veinazès
Lacaza
15120 La Capelle-del-Fraisse, dept Cantal, region Auvergne-Rhône-Alpes, France
Posted by henk van es at 9:05 PM