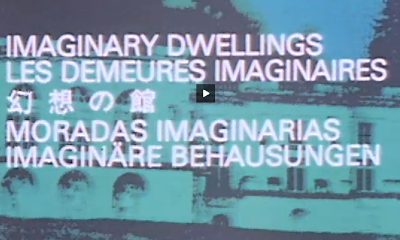 All the years I have been researching documentation about outsider environments, I did not encounter any referral to a movie made in 1977, entitled Les demeures imaginaires, until some days ago I saw the announcement of an evening with open air cinema on July 6th, 2013, at the Art Brut Museum (Collection de l'Art Brut) in Lausanne.

French art critic and expert of art brut Laurent Danchin will host the evening and he sure will have interesting details to share, both about the makers of the films and the creators of environments portrayed in these films.

Les demeures imaginaires is a remarkable production which presents the Watts Towers by Simon Rodia, the Junker Haus of Karl Junker and the Maison Picassiette by Raymond Isidore


The film, composed in 1975, probably was shot on 16 mm color film, which makes it for our nowadays eyes, used as we have become to digital processing, a bit blurry and old-fashioned. It has an introduction with elements (children engaged in creative activities, the facade of the Mercery castle) which are only partly relevant to its main story. Of course, these are just matters of form.

What makes the film really remarkable in my opinion, is the circumstance that all contributions to the production have been made by psychiatrists.

The part about Simon Rodia (starting at 4'00") was provided by Irene Jakab (1919-2011), a psychiatrist of Pittsburgh University, cofounder of SIPE, the Société Internationale de Psychopathologie de l'Expression et d´art-thérapie. In this field she published Drawings and printings of mental patients, Budapest, 1956, later re-edited as Pictorial Expression in Psychiatry, Budapest, 1998.

I also found a note saying that Jakab in 1971 presented a film about the Watts Towers. It is unclear to me if the part in Les demeures imaginaires is equal to this one.

The part about Karl Junker (starting at 8'28") was provided by Kurt Behrends, a german psychiatrist from Dùsseldorf. The film was sponsored by the Psychiatrische Abteilung des Institutes fùr Lebensberatung Stadt Düsseldorf  (Psychiatric department of the institute for counseling in existential questions). I couldn't trace any info about some special relation of dr Behrend with Karl Junker's creation.

The third part, about Raymond Isidore (starting at 17'30") was provided by Gaston Ferdière (1907-1990) who in the film is credited as the one who proposed the concept of the film.

Ferdière was a psychiatrist who liked the arts, wrote poetry and participated in surrealist circles in the Paris of the 1930's and later became doctor at the psychiatric hospital in Rodez in southern France. One of his patients was Antonin Artaud and the way Ferdière treated him raised a lot of controversy. 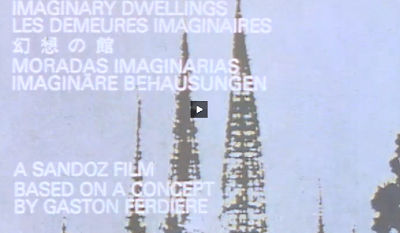 In the late 18th and early 19th century western psychiatrists like Lombroso, Morgenthaler, Prinzhorn, Meunier and Marie have been important in identifying and studying creative talents of inmates of their institutions. By collecting their works and publishing books about these patients they laid a foundation on which after WWII Dubuffet established his realm of art brut.

But the times they are a-changing. In the 1970's new medicines became available for psychiatric patients and in many European countries the large psychiatric institutions were closed. Patients henceforth would live in small units or get care by outpatient treatment. Currently there are small scale studios/workshops that provide an opportunity for psychiatric patients to be active in a creative/artistic way.

Am I wrong in supposing that above developments implicate that contemporary psychiatry no longer is present with regard to discussing developments in outsider art and outsider environments, and correspondingly. also that psychiatry currently no longer is seen as an interesting interlocutor by those who in our days lead the debate (art historians, curators, social scientists) ?

If so, this could explain why during all those years I never saw a referral to the Les demeures imaginaires movie.

What I consider as a pity. Because this film by Eric Duvivier, dated in its design as it may be, has quite instructive scenes of some outstanding art environments. And also because, in retrospect, this film might be seen as a last tribute to a bygone era, a landmark that underscores the departure of psychiatry from the discussion about outsider art/outsider environments.