On her website Step off the beaten track Czech researcher Justina Orlovska publishes the discoveries she makes about abandoned, unusual and undiscovered buildings, which she encounters when traveling through the Czech Republic and other Eastern European countries.
While doing her research she also encounters art environments with a character that fits in with her research design. From the point of view of the field of art environments, it is of great significance that such art environments can also be mentioned in the inventory undertaken by this blog. 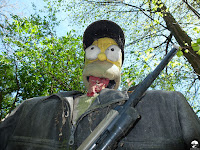 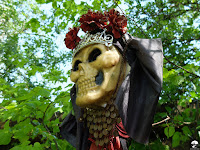 In the following text an art environment is presented, which was first published in January 2022 on Justina Orlovska's website in an article entitled Weird Sculptures in the Forest. A Visit of the Outsider's House (Czech Republic).
Mainly through numerous photos this article reports about a small hut in a forest somewhere in the Czech Republic, that was built by an anonymous homeless person, who has lived here for 20 years.
Over the years, the hut has been surrounded by numerous sculptures, made by the hut's resident, whose name is (rightly) not mentioned. 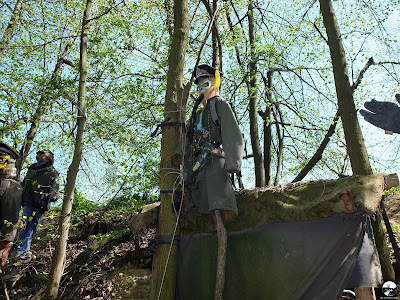 In her text accompanying the photos of the site, Justina says that it doesn't happen too often to see such an extraordinary place. And indeed, among the now around 580 art environments listed in this blog, not one is situated near a forest hut where the maker lives. 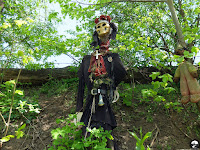 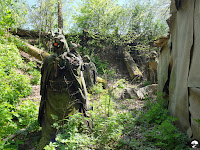 The site has a number of creations that depict people who wear long coats, which indicates that the maker has used an internal structure like a kind of mannequin over which the long coat gives shape to the figure.
Mostly equipped with a rifle or other shooting weapon, these persons, set up near the hut, could be a kind of guardsmen, Their heads are almost always provided with a headgear, glasses or other items.
What is most striking about the figures is the array of attributes with which they are decked out, not only weapons, but also ornaments, belts, chains, sometimes a gas mask....
In addition to the combative types, as set up near the hut, there are other more lovely creations, such as the little man pictured below. 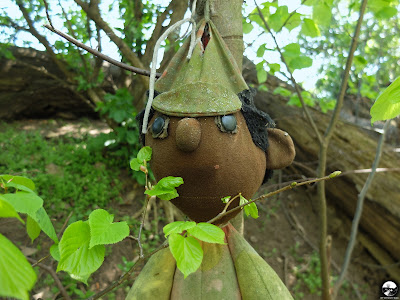 Inside the hut the walls are decorated with small-scale creations, these mainly of a decorative nature, in the form of puppets in colorful bouquets, as below, or other decorations 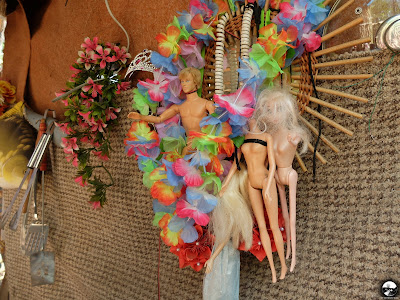 This art environment includes a variety of sculptures, often each with its own specific decorations.
Take a look at Justina Orlovska's website to see the various outfits
Documentation
* Article (January 2022) on website Step off the beaten track\
Anonymous
Sculptures in a Czech Forest
Czech Republic
location will not be published
Posted by henk van es at 2:44 PM