The image above shows a covered area next to a bakery. There are tables and benches for visitors to the bakery, but also walls decorated with carvings, depicting all kinds of characters and decorative items.
Welcome to the small village of Årdal, part of the municipality of Hjelmeland in southern Norway. Lovers of art environments will find a lot to see in terms of wooden sculptures, created by Eldfinn Austigard.
These sculptures are not only located around Austigard's house, in his workshop, in the covered area or flanking the entrance, but also a few kilometers away in a forest with some 50 wooden characters installed along a walking path of 1.5 km. 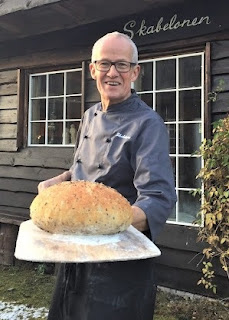 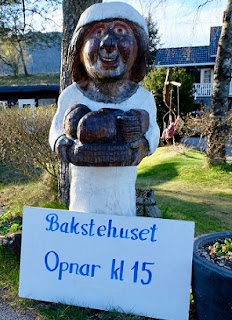 In above left image Eldfinn Austigard, standing in front of his bakery shop Skabelonen which he started around 2017. shows a loaf of bread he baked himself. The character carved in wood above right shows a sign with the text Bakstehuset, Opnar kl 15 (The bakery opens at 3 pm).
Austigard  does his bakery work as a hobby, going to work on Thursday and selling the homemade bread on Friday.
Life and works
In his younger years Eldfinn Austigard probably wouldn't have thought that he would become a hobby baker later in life and that he would make a large variety of wooden sculptures as a non-professional.
He was born in 1953 in Årdal and after his primary education he attended secondary education in Stavanger.
He started his working life assisting his father, who owned the local bus company and he succeeded his father when he retired in 1977. A few years later the bus company was taken over by another company.
Eldfinn and Gunhild, to whom he was now married, then bought a petrol station and a workshop from the bus company which they operated until 2007.
Austigard was now in his mid-fifties, and the part-time job as a cultural mediator he could get with the Hejelmeland municipality, undoubtedly suited the social and creative activities he had undertaken in the previous years.
In 2005, for example, he received the culture prize from Hjelmeland for his efforts in a local sports team, but also for his activities in the social and cultural field. He was apparently already active as a maker of wooden sculptures in previous years.
For his wife Gunhild the termination of the work at the gas station was also pleasant, because now she could devote more time to her activities as an amateur painter.
In 2009 Austigard became head of culture at the municipality of Hjelmeland. 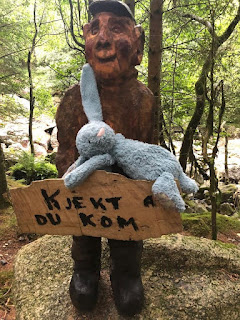 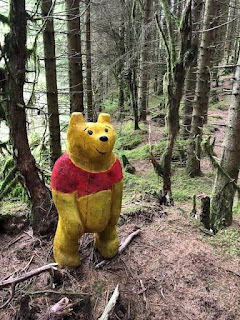 Wooden sculptures in Eventyrskogen
Many years before the opening of Eventyrskogen (Adventure forest), the municipality of Hjemeland had already planned to create such a tourist attraction and for that purpose Eldfinn Austigard was already creating a collection of wooden sculptures.
As part of a national project aimed at developing a National Tourist Route, which was also planned to pass through Hjelmeland, the municipality started negotiations with the owner of a wooded area (Bønardalen) to locate the fairytale park there.
But initially the negotiations with the landowner were unsuccessful. They came to a halt in 2010. 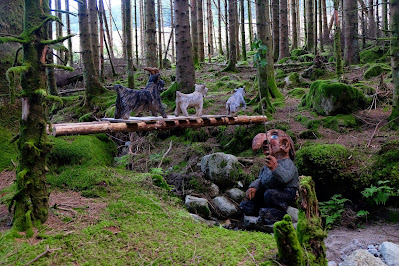 After some time negotiations were resumed and the municipality concluded an agreement with the land owners, which also included the construction of parking spaces and toilet facilities.
The park was officially opened in April 2013 and by the end of that month some 6000 people had already visited it. 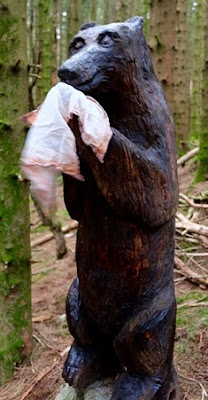 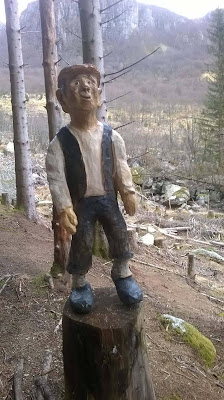 Along a circular path in the spruce forest stand the dozens of wooden figures from various fairy tales and legends created by Austigard. The trip among the trees in the mysterious forest takes about an hour and is suitable for the whole family. 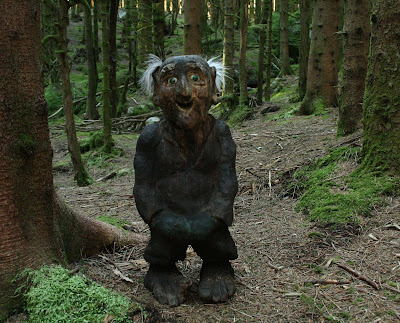 Eldfinn Austigard has not only produced the wooden sculptures for the forest area, in his spare time he also contributes in other ways, such as in the construction and maintenance of the paths and all kinds of management arrangements.
The adventure forest has become a success, it is very popular with families with children and easy to reach for young and old. 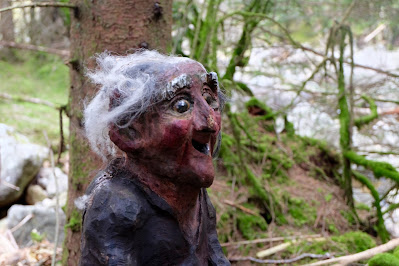 In October 2021 Eldfinn Austigard received the Rogaland Public Health Award 2021.
Norway uses a broad definition of public health and so the recipient of the award should have contributed to social support and to well-being and quality of life of the population.
Considerations of awarding the prize to Austigard included that he has made a contribution to public health beyond his function, that he is the "father" of Eventyrskogen, that he encourages people to do outdoor activities and creates social encounters and activities across generations, all things that promote public health. 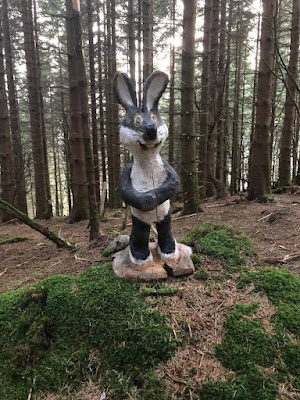