It all started in the early 1990s, when Henk Lamers (1953-2022) bought a decorative ensemble representing Stan Laurel and Oliver Hardy, an ensemble he placed in the front yard of his house.
After that there was no stopping him, he continued to buy other figurines and after some twenty years the garden had the appearance as in the picture above.
Life and works
Born in the early 1950s, Lamers after his primary and craft schooling got a job as a house painter. He married and the couple moved into a house in Weurt.
The village of Weurt, with some 2025 inhabitants, is part of the municipality of Beuningen, bordering the western part of Nijmegen, one of the oldest cities in the Netherlands, located along the river Waal. 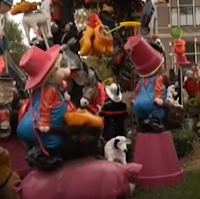 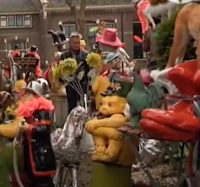 After twenty years of house painting, Lamers developed an illness in early 1990, caused by wrong substances that were still in the paint at the time, and he was declared unfit for work.
To have something to do, in 1992 he began decorating the front yard of his house with all kinds of fairytale characters and other figurines, an art environment that grew in size over the years. Currently the display is 35 meters long and a couple of meters high.
Lamers' site is comparable to gardens and houses richly furnished with dolls elsewhere in Europe, such as Lubomir Votava in the Czech Republic, Margarita Travkina in Russia and Francis Barale, in France. 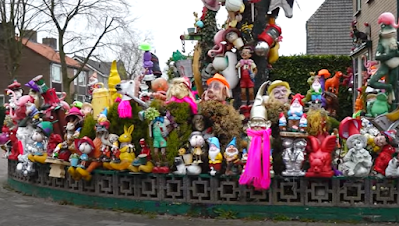 Among the hundred or so characters that decorate the front yard are a peacock, a crocodile, a stork, a flamingo, an orange sheep, a kangaroo with glasses, a pig also with glasses and a frog with a football on its head......
As for famous personalities, apart from Laurel & Hardy also Elvis Presley, Pinocchio, Puss in Boots and Snow White can be seen, And of course there are gnomes, as pictured below.
Given Lamers' profession, it goes without saying that the figurines are well painted. They form a colorful whole, and are selected to make viewers happy. 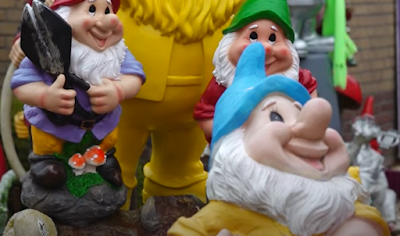 Henk Lamers
Garden with figurines
corner of Pastoor van der Marckstraat and Dijkstraat
village of Weurt, part of municipality of Beuningen, province Gelderland, Netherlands
can be seen from the street
streetview
Posted by henk van es at 3:05 PM