Lunas is a small community of some 650 inhabitants, located in the Hérault area in southern France. The village is known for a terraced hill decorated with a miniature village.

Life and works
This miniature village is a creation of Henri Galtier, who was born in Lunas.
When he was at the age when he had to earn his own living, he left the village. He held several jobs, but his longest was working as a miner in Northern France.
After 40 years, probably now retired, he returned to Lunas, where he moved into a house situated on a hill, which was part of the grounds surrounding the property. 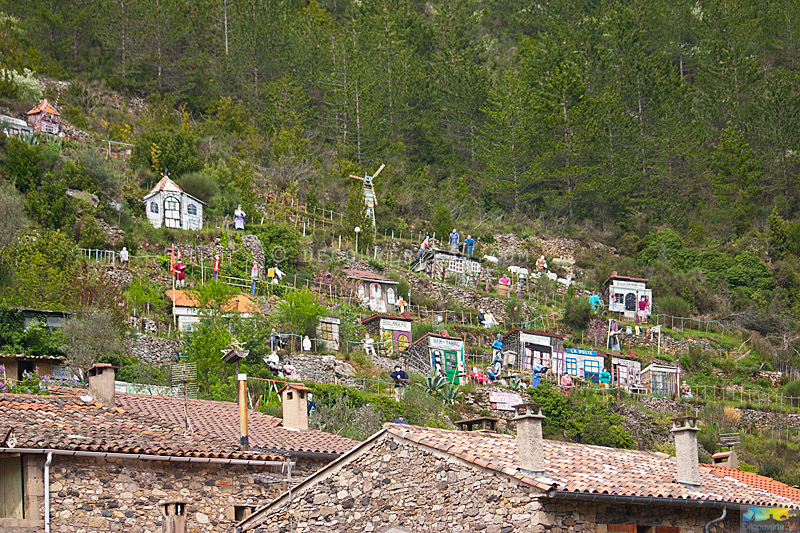 Galtier, who had fond memories of the time he spent in his younger years in the village, came up with the idea to recreate the atmosphere of those days by constructing a miniature village with scenes from that time.
The ensemble that he created, has some forty items which depict the school, the town hall,  the bar, the butcher, the barber, indeed, all shops and other buildings that used to be present in a small French village.
This art environment also displays a variety of personalities that characterize village life, such as people playing pétanque, a shepherdess, a chimney sweeper, a woman hanging laundry, and so on......
The site is not open for visits by the public. However, it has been constructed in such a way that it can be seen from the street (chemin de Nize, actually).
Although the people who populate the village are life size, best bring binoculars to get a good impression.

Inside Galtier's house is not only the workshop where he made his miniatures, there is also a room without windows in which he has installed a nativity scene.
When the lights come on in the dark room, once again a miniature world is visible with windmills, bridges, carriages drawn by horses, Noah's ark with numerous animals, all sculpted or otherwise shaped by Galtier.

Documentation
* Website Amis de Lunas, with detailed pictures of all items of the miniature village
* Website l'Hérault insolite (March 2011)
* Article by Sonia Terhzaz who visited Galtier in summer 2021. Her article was published on the Facebook page of Patrimoines Irréguliers de France on April 10, 2022. To my knowledge Sonia is the first to report about Galtier's in-house creations

Henri Galtier
Village occitan de Camarière
Lunas, dept Hérault, region Occitanie, France
no visits,
the miniature creations on the hill
can be seen from the chemin de Nize
Posted by henk van es at 9:38 AM