When Tiramisu Bootfighter from France with his Galerie Ambulante traveled around Eastern Europe in the fall of 2022, he found in the Romanian village of Ohaba the decorated house of Gheorghe and Cornelia Dobrin in the condition as shown in the image above.
The house was falling into disrepair, Gheorghe Dobrin had died in 2021 and Cornelia Dobrin had left for an unknown destination
As the image above, dated April 2013, shows, this art environment had seen better days.
It all started in 1992. When Gheorghe Dobrin in a nearby forest was chopping wood for a deaf neighbor, he came across a piece of wood with inscriptions, which reminded him of what happened in the forest of Ephraim. as described in the bible.
This probably refers to the biblical book of 2 Samuel 18, which describes the struggle in the forest of Ephraim of the then ten tribes of Israel against the tribes of David. 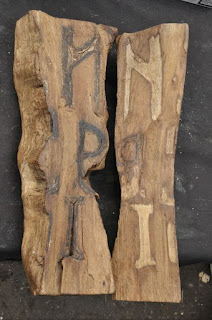 The experience Gheorghe gained in the forest touched him deeply. He took home the piece of wood which he considered sacred.
His sister Cornelia was apparently also struck by her brother's experience. The holy wood got a place of honor in the house and brother and sister started together to embellish house and garden with all kinds of decorations. 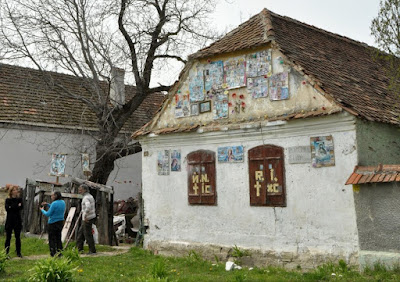 As can be seen in the image above, the short side of the house, especially on the top, was provided with collages with images and texts expressing religious themes 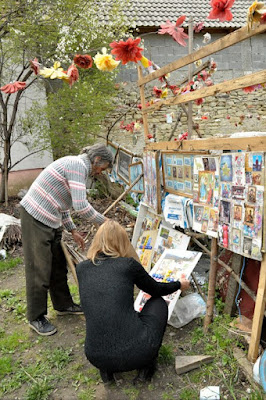 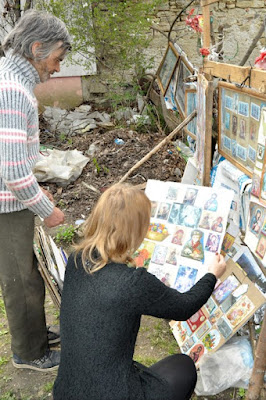 The long side of the house was also provided with numerous collages and decorations, both the wall and the ground floor in front of it.
In the available documentation, which is quite limited, it is also stated that icons were placed in front of the house, but the images do not show this.
What seems to be visible in the image below is a note in the documentation that the windows were covered, because of the fear of evil spirits. It can also be seen that the shutters on the windows were equipped with all kinds of decorations 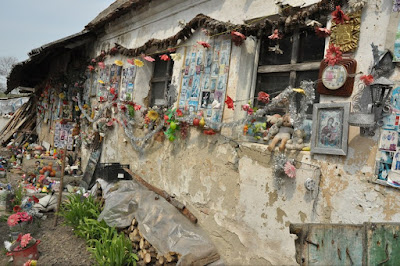 So much for the description of the situation based on documentation dating from 2013
Gradually, the decay of the building must have continued. It is likely that Gheorghe and Cornelia Dobrinook lacked the financial means to carry out proper maintenance.
The situation Tiramisu Bootfighter encountered in 2022 was an abandoned building, which lay in ruins. The collages were gone, leaving only a few marks on the door and objects piled on the floor.
Documentation
* Article (2011) on weblog Jurnal de călătorie prin Tara Fagarasului (Travel diary through Fagaras Country), with images
* Note and a series of pictures (2013) on the Facebook-account of Locuri de vizitat in Romania
* Entry (October 19, 2022) on the FB page Galerie Ambulante, by Tiramisu Bootfighter
Gheorghe and Cornelia Dobrin
Decorated house in disrepair
Ohaba, regio Tara Făgăraşului. Transsylvanië, Romania
can be seen from the street
Posted by henk van es at 3:53 PM