Doubice is a village with about a hundred permanent residents and many holiday stays in the Czech Republic. Located near the border with Germany, the village is a popular destination for holidaymakers who enjoy the Bohemian Switzerland National Park.
The village is also known for an extensive collection of wooden sculptures, which surround a local café-restaurant, named Stará Hospoda (Old  Pub). 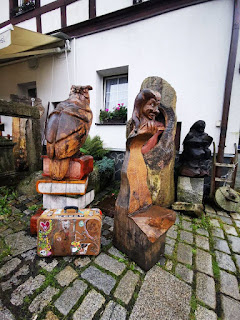 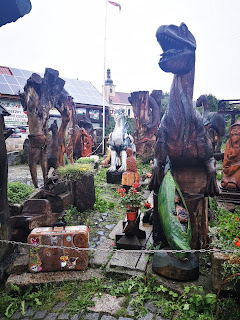 Life and works
The owner of this café-restaurant is Karel Rezek, who was born in the early 1950s.
Not much is known about his early years, except that he made a wooden fairytale figure for his three year old daughter Andrejka, a gesture that led him to take up a hobby of transforming pieces of wood into sculptures.
As the number of sculptures increased, Rezek was captivated by the desire to get into the Czech Book of Records, which he actually succeeded in 2012 when he -around sixty years old- had made 316 sculptures.
Some twenty years earlier, around 1990, Rezek became the owner of the café-restaurant, which he runs with his wife.
The interior of the cafe is richly decorated with all kinds of collections, such as tin plates, weapons, musical instruments and a variety of bells. 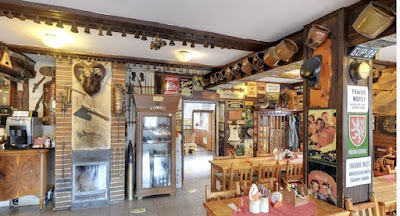 And outside you can't miss the large collection of sculptures, often including large creations, such as the gigantic grasshopper Ferdy the Ant, but also devils, witches, fairytale characters, dragons and horses.
The two images below (from a regional tourist website) give an impression of the location of the site in the landscape and of the variety of sculptures in front of the cafe.
At the rear of the café-restaurant is a garden that has been transformed into a true children's paradise with various sculptures of animals and fairytale characters, as well as playground equipment, toy cars and a witch's house, all kinds of things for children to play and have fun with;
There are also sculptures of Křemílek and Vochomůrka, figures from a fairy tale well known in the Czech Republic, as can be seen on YouTube.
Two other interesting aspects of Karel Rezek's site are first of all that every summer an international contest for woodcarvers is organized  and secondly that there is also a collection of tanks from the period when the Czech Republic was communist.
Documentation
* Website of the café-restaurant Stará Hospoda
* Article (October 2011) in regional newspaper Novinky
* Article in touristic website Turistika, with a photo gallery
* Entry on website Camera Obscura
Karel Rezek
Sculptures around a café-restaurant
407 47 Doubice, district Děčín, region Ústecký, Czech Republic
can be seen from the road
Posted by henk van es at 2:54 PM