Jon and Muriel Richards, Chapel of the crosses

Jon Richards, an importer of watches from Bristol, once retired went to live with his wife Muriel Richards in Mappleborough Green, a village of some 540 inhabitants in the county of Warwickshire in the West Midlands region of England.
Warwickshire is known as the county with William Shakespeare's hometown Stratford-upon-Avon. In the circle of lovers of follies in England it is also known for its hand-built and decorated Chapel of the Crosses, located in the community of Mappleborough Green. 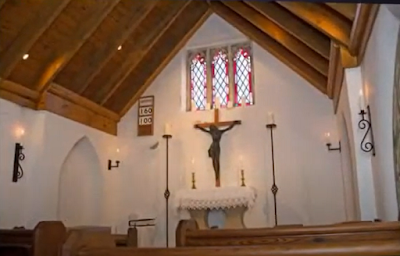 Creating a chapel
It all started around 2006. Jon Richards wanted to surprise his wife with a chapel in the backyard and said he was going to build a barn there to have a somewhat more spacious workshop.
It became a structure with a surface area of 8 by 12 feet (2.4 by 3.7 meters), measurements that would allow him to construct the building without first getting a planning permission.
When after some time of construction a Gothic window appeared on a side wall, Jon's wife Muriel realized that the new building wasn't workshop, but something else. Learning that it had to be a chapel, she was very enthusiastic and started to actively help with the further construction and furnishing. 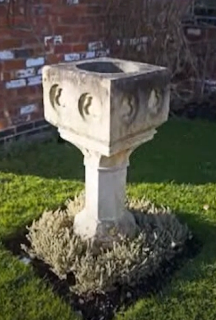 Some details of the chapel
Outside the chapel is a stone baptismal font, as depicted above, taken from a garden in Leominster in Hertfordshire. This font was too large to fit into the interior.
The Gothic frames for the stained glass windows came from a yard in the Midlands and the glass windows were custom made by a friend who was a glazier.
The couple rescued full-length pews from a church in Hertfordshire in southern England and shortened them to fit two people per pew, allowing a total of 12 people to sit in the chapel (and a smaller number to stand). 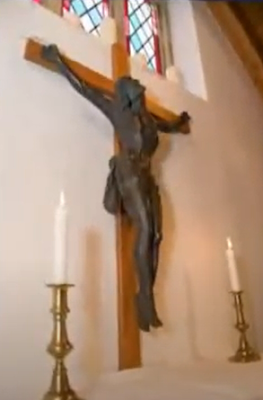 Above picture depicts the chapel's centerpiece, a bronze sculpture of Jesus on the cross, 3,5 feet (around 1 meter) large, which came from a scrap yard in Bristol.
The altar had to be modified to fit and the stained glass windows had to be specially cut.
Jon considered installing an organ, but decided against it because it would take up too much space. Instead, there are speakers playing hymns from a CD player.
The tapestry below, depicting the Last Supper, was found on a market in Spain. 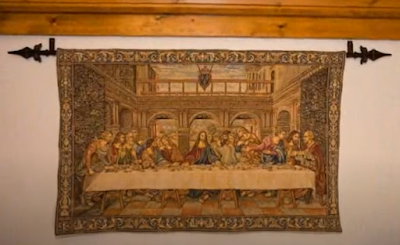 Other aspects
The name Chapel of the Crosses refers to the three crosses Jon Richards places on a neighboring hill to mark the Holy Week around Eastern. The center cross is taken along in a Good Friday procession that passes through the fields of the community.
The chapel's architecture is replicated from the local church in Mappleborough Green.
The vicar of the ecclesiastical region under which Mappleborough Green belongs is sympathetic to the chapel Jon and Muriel have created. The building is not officially consecrated as a church, but church services are held in which the vicar participates.
Jon and Muriel are also occasionally approached with the question whether a marriage can be solemnized in the chapel, but for this they don't have a permit.
A holiday accomodation on the premises
From 2010 the couple also runs a self catering holiday accommodation called Haye Pastures Farm. Guests staying in the cottages have free access to the chapel, which is open daily for this purpose. The experiences shared by holiday guests on relevant internet sites are in general all very positive.
Documentation
* Article on the website Folly Fancier
* Article (April 2011) on website BBC News
* Article (February 2015) on the website Premier Christian News
* Article (November 2016) on the website Little Things
* Website about the holiday accomodation
Video
* A short video (0'36", YouTube) by Home Build Stories