Bury Mis is the name of a café-restaurant in Bukowina Tatrzanska, a village of some 3000 inhabitants in southern Poland, near the border with Slovakia. Owned by Ewa and Bartłomiej Kolbusz, this site has become known because of the large variety of items that decorate it's exterior and interior. 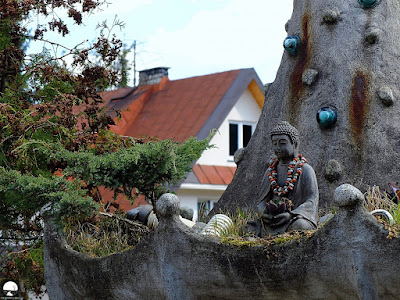 Life and works
Bartłomiej Kolbusz, who added the various items, included the ones he created himself, was born on January 10, 1977. He got a training as a physiotherapist, but he was much more attracted to work as a visual artist.
In particular he was interested in making works of art from all kinds of remnants of metal and iron. So in 1999, when he was 22, he founded a sculpture workshop focusing on that artistic genre. The studio was called Mała Manufaktura Radykalna Metalmorfozy Złomu (Small manufacture of radical metal- morphosis of scrap). 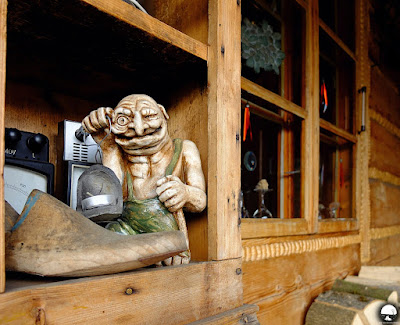 His artistic production includes a large variety of creations, mostly made from scrap metal. He made small items such as metal jewelry (rings, brooches), but also larger ones such as chairs and sofas, and creations in which various remnants of metal are combined to, for example, an artwork that can be recognized as an animal on legs, but then without reference to an in reality occurring living creature.
The larger creations he made sometimes have Latin names, such as a bull referred to as Taurus Peculiaris Bioindustrialis or a six-seater bench in a park called Ampulum Situlum.
Also, some large creations have mainly a utilitarian quality, such as a machine to remove 120 capsules from a  series of beer bottles in a few seconds, a device he made for an international meeting of employees of the Dutch beer company Grolsch. 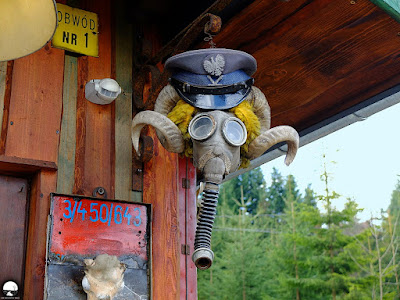 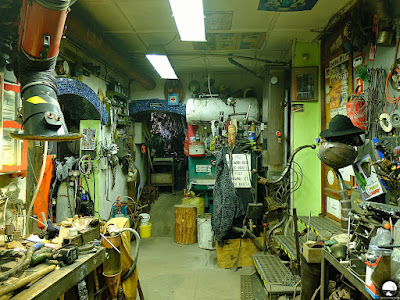 The photo above shows the workshop that Kolbusz set up as soon as he and his wife became the owners of Bury Miś.
The various images in this post give an impression of the way in which Kolbusz shaped the decorations of the café-restaurant.
The image of the decorated outer wall, at the very top of this article is followed by a Buddha meditating among the grass, a fairytale character (?) and a character with a cap, a gas mask and horns. 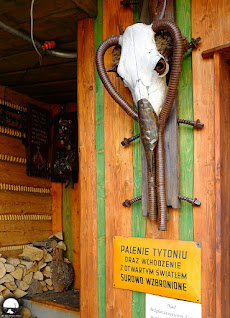 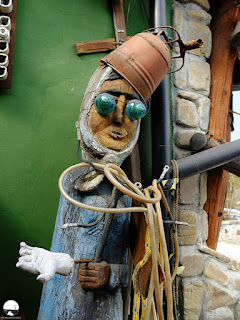 The pictures around this part of the text show creations that reside in the interior of the cafe-restaurant: top left a creation that somewhat resembles an animal head, next to it a bespectacled male, and below once again an animal head, this one flanked by an old radio and some clocks or measuring instruments. 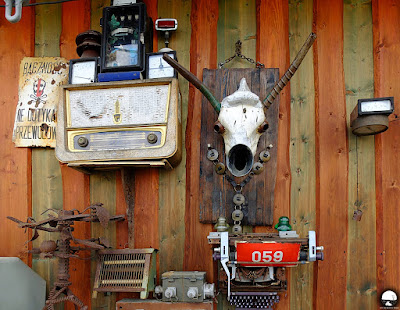 In the same vein as these creations, the interior of the café-restaurant has metal chairs and strange lamps on the tables that create a very specific atmosphere. A wall is covered with metal tools such as large saws and other carpentry tools.
There are several old radios, a teddy bear sitting in a box mounted on a wall, a dog-like creature with two heads and there is a wooden sculpture depicting an old woman with glass eyes, a pitchfork on the head and behind her a grave cross.
A panoramic, movable series of photos shows the entourage of the interior better than words, which especially goes for the color scheme of the walls and ceilings. 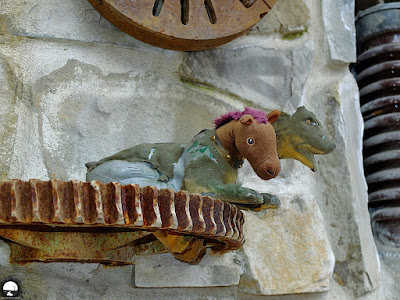 The grounds outside the café-restaurant are dominated by a 14 meter high metal lighthouse, named Iluminaris Marinaris Bukowina,
The tower is topped by a glass structure from which a light is switched on every hour. There is a plan to use the lighthouse as an industrial climbing wall by adding external forms of handholds. 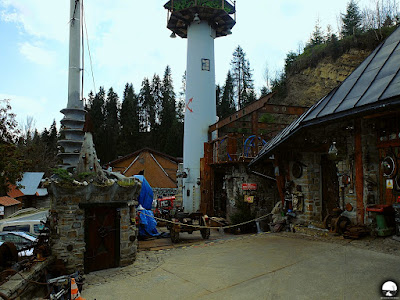 Documentation
* Website of Bartlomiej Kolbusz with a series of photos that give an impression of his artistic production
* Website of the cafe-restaurant Bury Mir, with scenes of the interior
* Website Off the beaten track (April 2017) by Justyna Orlovska with an article and various photos of the site
* Article entitled Bury Miś-the taste of positive madness, with a variety of interesting photos, on          website Kolory Zycia
Videos
* Video  (undated (2013?), 2'16", YouTube) presenting Bartlomiej Kolbusz interviewed by Szalona Zuzia