In the municipality of Jupânesti in Romania -with about 2400 inhabitants- there is a singular architecture in the form of a set of buildings with walls consisting largely of glass bottles.
Life and works
This art environment was created by Vasile Piscureanu who was born in the early 1950s and became a mason by profession.
When he was in his early 40s, in 1994, his wife divorced him. To deal with his feelings about this, he decided to build kind of a chapel near his house, a special one, with numerous glass bottles incorporated into its walls.
In 1995 and the following year, he collected a good number of glass bottles and when he had sufficient stock, during 1996 he got to work.
As can be seen in the very first image, over the years it became an ensemble of constructions, both at the front of the house and in its backyard.

His first activity was decorating the porch of the house. Then he built a mini chapel and a bedroom at the entrance of the property

Subsequently, structures with a residential function were built at the rear of the house, 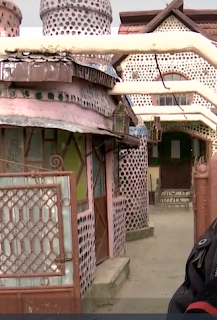 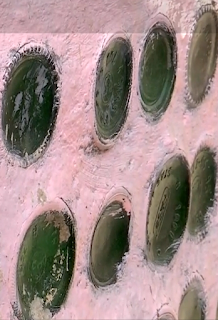 The mini chapel, located near the entrance, has a round shape and the roof resembles a pan lid.
The pink walls of the chapel include numerous bottoms of bottles, which stand out in black against the pink walls, as shown by the image above right.
When designing the interior of the prayer room, Vasile was inspired by a sculpture by Constantin Brancusi, The Table of Silence,  a round table surrounded by twelve round seats, a monument unveiled in 1939 as a tribute to the Romanian soldiers in the First World War.
The image below shows part of the round table with twelve seats as installed in Piscureanu's small chapel
Other parts of the art environment
Some spaces in this singular architecture present the visitor with surprises. 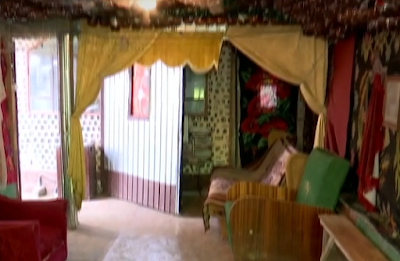 This goes for the room in the picture above . It has a fairly ordinary look in terms of decor, and there are no bottles to be seen, but wait a minute, the bottles are plentiful as the ceiling is full of them, including bottles providing the lighting, as shown in the picture below. 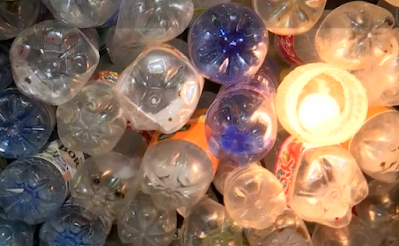 And then, the image below gives the full picture, Piscureanu standing in the room, looking up at the ceiling with a display of bottles, one of which provides the lighting.
Current situation
Meanwhile, in 2022 Piscureanu has been building his singular architecture for about 26 years and it appears that he has now taken other paths.
In October 2022, for example, he was visited by Tiramisu Bootfighter, who in that period made a tour through Eastern European countries with his Galerie Ambulante. Piscureanu told him that he planned to build a large plane to decorate the entrance of the site.
He also showed another recent project. In the photo below, Piscureanu points to the entrance of an underground anti-nuclear shelter in his garden. 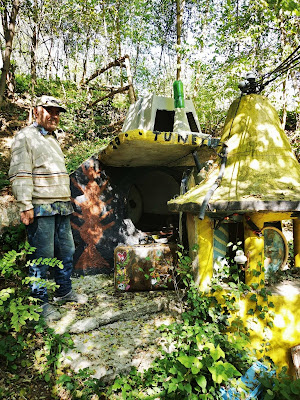