A local priest who completely decorates the local church. It happens very occasionally ¹. Here is the story of the church of Ménil-Gondouin, a small community of some 175 inhabitants, located in Normandy, France.

During all the years he was the local priest, he decorated the interior and the outside of the church with representations of paradise and hell, religious texts, paintings, frescoes, all executed rather colorful, vivid and brightly. People said it was an "église parlante et vivante", a talking, vivid church. 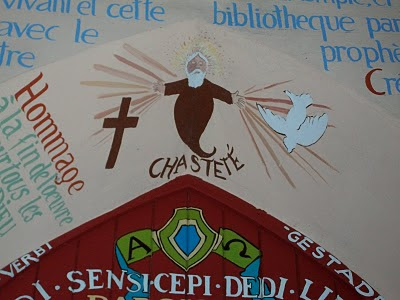 Abbé Paysant made pilgrimages to Rome, Jerusalem and Egypt. He also collected statues with a religious character which he displayed in the church.

After the priest had passed away in 1921, the ecclesiastical authorities ordered the removal of all frescoes and statues.

However, around the year 2000 inhabitants of Ménil-Gondouin took the initiative to restore the decorations. They got support from the local authorities. If I am correct the mayor of the community made a pilgrimage to Rome to raise interest in the restoration of the church.

So thanks to all this enthusiasm and also with financial support of a number of institutions, from 2004 until 2006 the frescoes have been restored by mural artist Hugues Sineux and his brother Jean-François Sineux.

It was a great help that over two hundred old postcards of the decorated church were available, most of these produced on behalf of the priest. But to decipher the original colors, scrapings had to be made.

Most statues, however, could not be recovered. 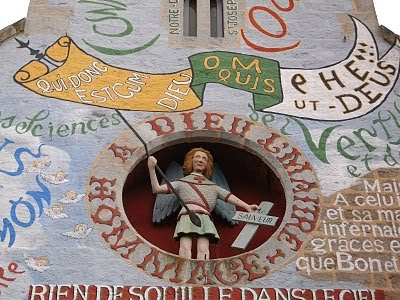 How to characterize Paysant's creation?

In France the decorations of the church are usually assessed from an art brut point of view.

However, in an article on the website Déjà Vue (April 2010) Patrick Pecatte has argued that the decorations better can be studied in the context of the art of propaganda. He offers a lot of information about the message the priest wanted to disseminate by means of the decorations. (A translation into English of his article is available in the collection OEE texts).

note
¹ another priest who decorated his church is Paul-André Lecoutre from Wirwignes, Pas-de-Calais