Above man in a blue jacket has been present earlier in this weblog. This sculpture was in my post about the exposition Annan Konst, which in 2009 and 2010 has been touring through some Nordic countries. 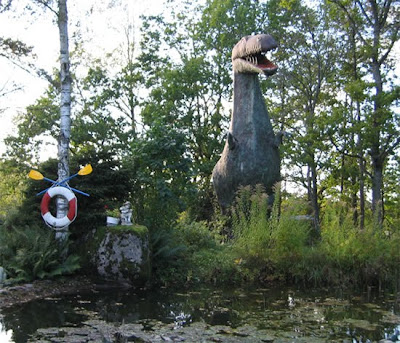 The internet hasn't much information about Helmer Jarl (1920-2009) and the creations he made.

He lived in the community of Algutstorp, that belongs to the city of Värgärda in Sweden.

And he transformed the garden around his house into a sculpture garden, with an impersonation of himself (the man in the blue jacket), a dinosaur, like the one in the picture above (about 7 meters high, made of glass fiber) and he made kind of a scene from the Roman Empire with a small temple and a Roman lady approaching it, once more using that nice blue color.


The actual (October 2009) status of the garden is not quite clear. Probably the house were Jarl lived, at some moment at the end of his life was sold to a new owner and Jarl did not live there any more when he died.