When British singer Jarvis Cocker in 1998 was shooting in France a part of his Channel 4 TV movie Journeys into the Outside (broadcasted 1999), he visited the sites of Abbé Fouré, Robert Vasseur, Bodan Litnianski, Raymond Isidore (=Picassiette), Chomo, Ferdinand Cheval (=le Facteur), all well known today.

Jarvis Cocker also visited the site of late Monsieur G., who nowadays is less well known and about whom the internet hardly has any observation.

There he began building his own house, which was meant to have terraces, towers, an indoor swimming pool and an indoor theater. The construction, as far as realized,  had at least a ground floor, an upper floor and a roof structure, and by its curious characteristics (such as its circular windows) relevant experts consider it as a folly.


Monsieur G decorated the walls and the palisades of the property with all kind of paintings of subjects he considered important in life. 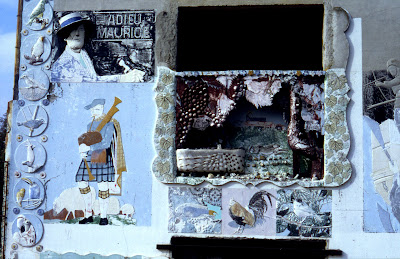 The next two pictures show the decorations on the outside wall and their decline between 1977 and 1994 (the man with the walking stick is monsieur G.):

The same scene as photographed in 1994
:
Monsieur G had constructed a big house, but he himself just lived in a small room in the basement, the remainder of the house was permanently under construction.

One of the rooms was meant to be kind of a projection room, with the idea that images would be shown and voices of the past could be heard, so as to interfere with sounds and images of the present.

However, during monsieur G's stay the house hasn't been connected to electricity and the projector, if any, has never worked. 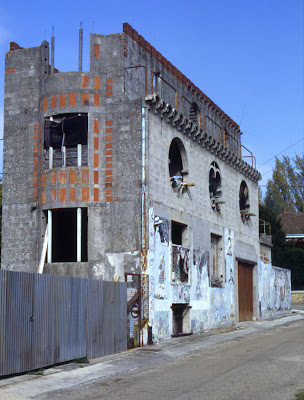 What made him special in the opinion of the locals, was his affinity with lasers. He is quoted to have said: "The laser is unique in the world. Only my house distributes it. Why is this here the sanctuary? There is something that attracts them.''

In mr G's opinion the Russians were responsible for all incoming lasers, those directed at the house. 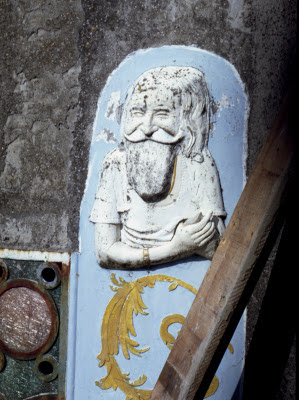 What about his name?

Above picture, a self-portrait attached to an outer wall, in my opinion represents mr G as a friendly, good-humored man. It's a pity there are no data available about his life before he settled in Nesles, like it also is not clear what his real name was. I have seen names like Gaston Louis, Gaston Gaye and Gaston Gastineau, which probably is the correct one.

The Follies Journal nr 9/10 (2010), has an appendix with updates on French follies (by Pieter and Rita van  den Boogaart) and in a note (first published 1995) on mr G (on p 27) it is said his name was Gaston Gatinet and that he was a police officer.

This article also has the story that mr G wanted to be able to see the Eiffel tower from his house, some fifty kilometers away, which cannot have worked out, the authors presume.

The decorations have disappeared, the house has been renovated, nothing recalls monsieur G

After monsieur G died, in 1986, the house has got a new owner. In the 1990s decorations still were visible and the house had its original appearance.

However, Rita and Pieter Boogaart, who visited Nesles in the spring of 2014, report that all decorations have gone, the house has been renovated and whitewashed. Nothing recalls the original site.

Documentation
* French filmmaker and author Clovis Prevost in 1977 has made a 28 min movie, entitled Monsieur G dans le sanctuaire des lasers
* The site, as it was twelve years after monsieur G died, appears  in Jarvis Cocker's Journeys into the Outside (1999, on YouTube in 2012, see my post of August 23, 2012). This video also has scenes from the Prevost movie from 1977.
* Website Habitants-paysagistes (by Lille Art Museum from March 2018 on) has a series of pictures by Francis David (1982-1992)