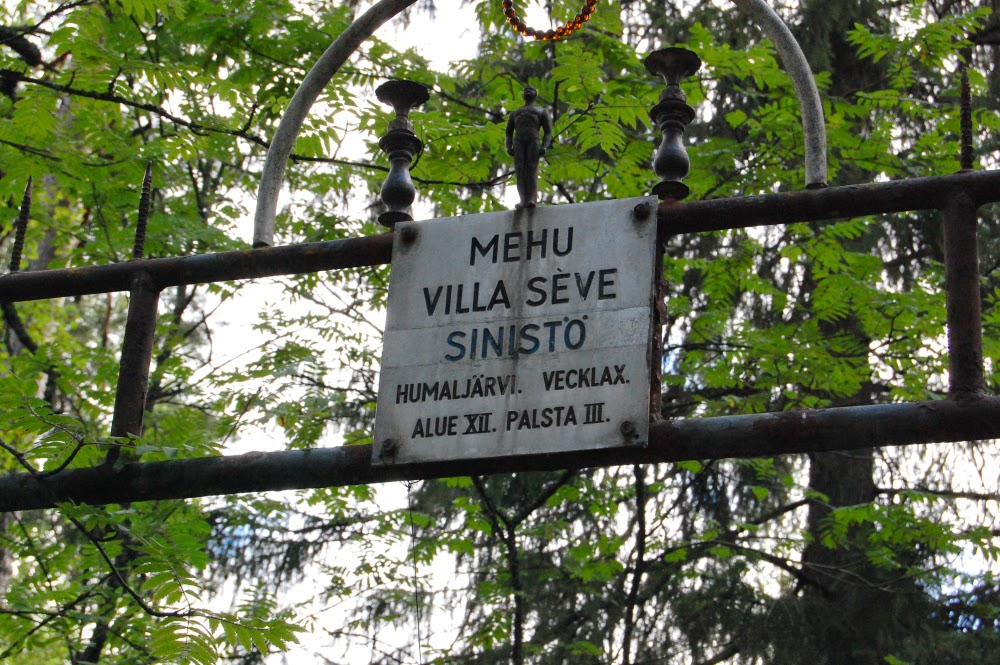 this picture and the next four (around 2012) courtesy of
Katla, Heathen Harvest website

In the 1950s Elis Sinistö (1912-2004) from Finland settled on a plot of wood in the community of Kirkkonummi, where he founded his own domicile, using all kinds of recycled materials to construct various buildings, such as a house to live in (as on the next picture), a temple, a sauna, a guest house and various other constructions. 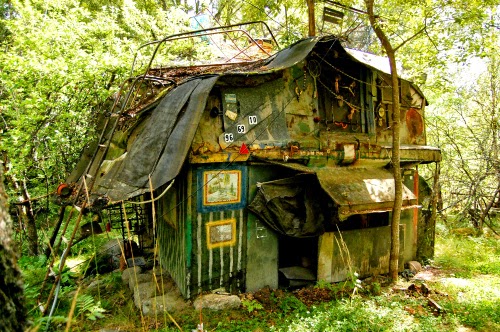 Here he would welcome visitors, making a dance, reading some poetry, or inviting them to make a walk around the adjacent pond.

For visitors who wanted to stay overnight, Sinistö had constructed a guest house, as in next picture. 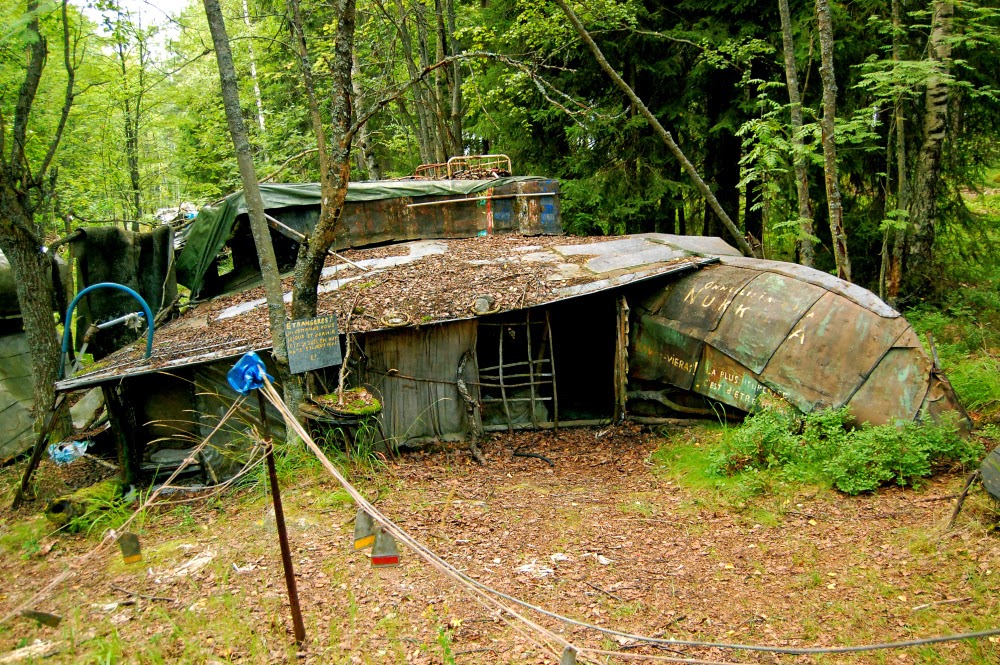 Sinistö incorporated a lot of qualities in one person, he was a philosopher, a yogi, a dancer, singer, poet, performer.... and he did not care about property, nor about the so called prosperity of western society....

He has been quoted saying that he did not own anything, it was just mother Earth that owned him. His life, he said, just was "pure being". 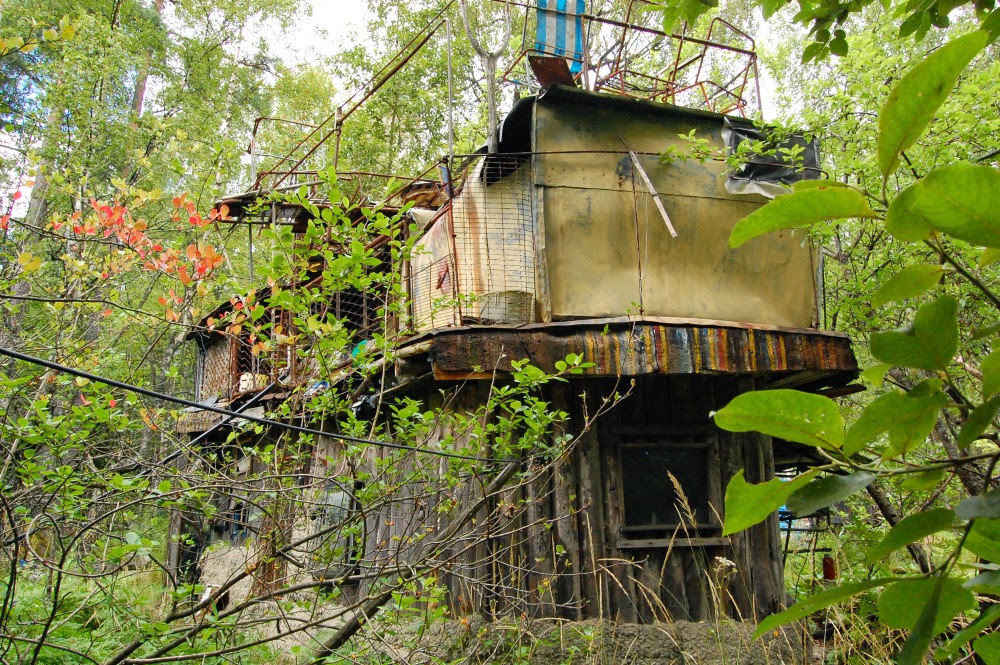 Grown up in a poor, not very warm family, in the 1930's he traveled the country to find work, doing small jobs.

In the 1940's he had to fulfill military service, but his refusal to carry a weapon and his vegetarianism brought him into trouble and resulted in a psychiatric admission for some time. 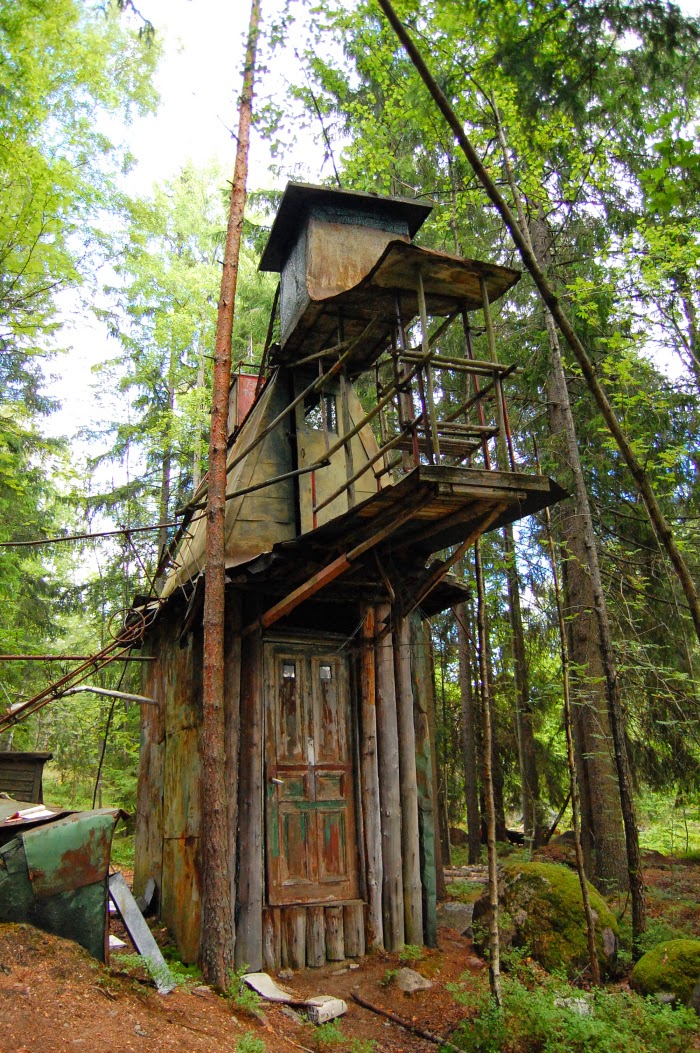 After the war Sinistö became a professional dancer for theater companies, and he also was a painters model. With the money earned in these jobs he could buy the plot of land in the woods, where he single-handedly constructed his Villa Mehu.

No future for this site

After Sinistö's death in 2004 the property was legated to a folk art music foundation, which ensured that interested people could visit the site, However, this foundation in 2011 went bankrupt and since the site with its buildings was a collateral for loans the foundation had contracted, it had to be sold.

It was bought by a neighbor, who in July 2013 told a Finnish newspaper that due to lack of funds it was not possible to renovate the already dilapidated structures. Just the ones from stone, the headstone and the pond where Sinitstö's ashes were scattered, will be retained.

The photo below, made in May 2019, shows the gradual degradation of the site. 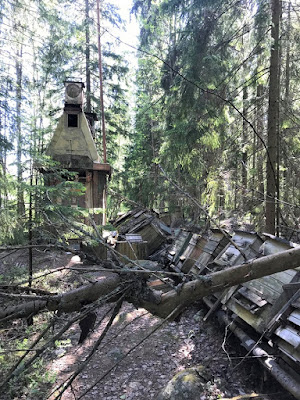 You dream about the emptiness

Mike Inglis, an artist from England,  around 2019 spent some time in Sinistö's art environment,  immersing himself in this now uninhabited world of woodland structures set in the tranquility and privacy of the remote Finish forests. Trying to understand the fantastical mind of Sinistö, he made this video (available on Vimeo)

Documentation
* Jan Kaila's weblog with portraits of Sinistö
* Article and pictures on the ITEnet website
* A series of photos (2018) by Sophie Lepetit on her weblog, here and here
* In summer 2020 two Finnish articles were published about Sinistö's legacy, both with a variety of illustrations:
- on website Urbanex-ninja (June 10, 2020)
- on weblog Styleheaven-marjorie (July 4, 2020)
Videos
* Video by Lauri Ainala (YouTube, uploaded aug 2009, 5'03")