Émile Taugourdeau (1917-1989), a mason who lived in Thorée les Pins, France, in his forties had to leave his job due to an injury he had received during World War II.

Around 1954 he made an ornament decorated with mosaic to embellish his garden. This was the beginning of a lifetime activity of decorating the garden with sculptures of various personalities and all kinds of well known animals, such as elephants, giraffes and cows.

Taugourdeau made creations for some 35 years, embellishing the site with over 300 various sculptures. 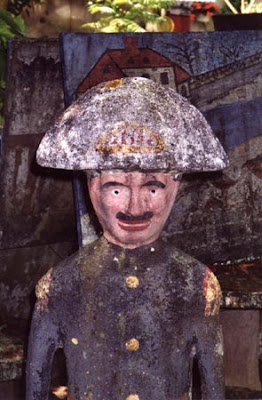 An art environment in decay

Taugourdeau passed away in 1989. His widow continued to take care of the garden and around 2002 the site still could be visited. But when she also had died  the garden was no longer cared for and the site became overgrown with greenery, sculptures were stolen and the site fell completely in decay,

And currently (2019) René Taugourdeau also has fallen into oblivion.

Documentation/more pictures
* The weblog of  Bruno Montpied of december 3, 2009 has a description of the site as it was in the past and as it was around 2008/2009 (in french).
* The Remy Ricordeau movie Bricoleurs de paradis. Le Gazouillis des Èlèphants (early 2011, 52") has scenes shot in 2010 of the site in decay, overgrown with blackberry.

* More pictures (dating from 1991 and 2002) on the art insolite website
* Some sculptures have been transferred to the Luna Rossa garden museum in Caen, (France).
* Website Habitants-paysagistes (by Lille Art Museum from march 2018 on) has a series of pictures (1984-1990) by Francis David

note
¹ The magazine Zon'art is not available anymore on the internet; see also OEE-texts