Roland Dutel is an autodidact artist, who belongs to the French group of artistes singuliers. The rather loose description art singulier is used in France for artists who in general are self-taught, are non-mainstream and practice a spontaneous, non-intellectual way of expression.
The term has it's origin in the famous 1978 Paris exhibition Les singuliers de l'art: des inspirés aux habitants paysagistes. In Anglo-Saxon terminology one would use the term outsider art.
Life and works

Born in 1955 in the community of Andrézieux in the Loire department, Roland Dutel currently lives and works in the south of France, in the center of the small community of Dieulefit.

He makes paintings and sculptural works by re-using all kind of materials, like paper, iron and plastics.

From 1989 on Dutel has transformed his house into an art environment by decorating its exterior and turning the cellars in the interior into kind of decorated grottos. 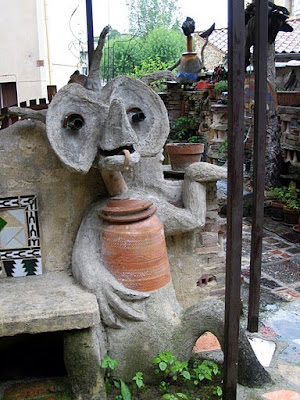 The decoration of the facade is very lively and expressive, with some representations of figures in it.

In a very general way this work is in the same range as the work of Danielle Jacqui, who decorated exterior and interior of her house in Pont de l'Étoile. Both Dutel and Jacqui adhere to art singulier.

Documentation/more pictures
* Article (2010) by Jeaninen Rivais, on her website
* In her weblog Sophie Lepetit in March 2014 had some posts about Dutel:

- the exterior of the house,
- its interior
- and his visual artworks

* Pictures by Guénola Moreau (2011) on Google photo's
* Article (November 2019) by Dominique Clément on his weblog Hérault Insolite, with a variety of pictures
Video

anymore as kind of an art gallery,
so visits -if any- only on appointment