Alcolea del Pinar is a small community in the district of Guadalajara in Spain.

Màximo Rojo (1912-2006), who settled in this community in the early 1940s, led a simple, industrious life as a farmer. When still a young boy his father died and Máximo wouldn't enjoy any schooling since he had to work to earn an income for the family.

It was only when he had entered military service that he got the opportunity to learn to read and to write, practicing his reading by using encyclopedias.

After military service Rojo became a farmer. During all the years he worked as such, he didn't show any interest in art or in making creative constructions. However, once retired from work in 1979, at the age of 67, he began making sculptures from concrete by applying a layer of cement to an iron frame.

For some twenty years Rojo has been passionately active in creating sculptures and ultimately his Jardin Escultórico would include some 300 sculptures, all gathered in the rather limited area of the site. 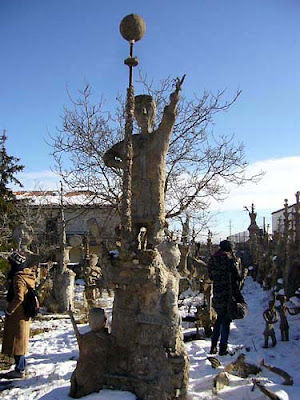 The sculptures depict persons and scenes which represent biblical events, stories about important personalities and about happenings in the history of Spain and the world, all together forming a scenic review of popular knowledge, as if Rojo was driven by the need to share with his fellow compatriots the knowledge he had gained by reading encyclopedias when in the military.


The garden could be visited and attracted a lot of visitors during the years. 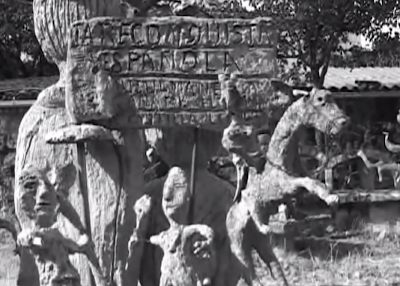 After Rojo died in 2006, for some time the garden still could be visited, as the colored pictures (taken in 2010) show. In later years the site was closed.

The local authorities made plans to assure the future of the site, seeking financial support from the province to realize these plans. but the economic crisis that began in 2008 prevented the allocation of public funds. The sculptures are in danger of deteriorating.

As shown on the video below made in 2015 by Sergio Flaquer Carraras (Serflac) the garden did still exist, although poorly maintained.

Videos
* Scenes of the site (2015) on the South Spain trip video by Serflac (YouTube, starts at 38.07, cannot be embedded here)
* El jardin imaginario, movie (2012) by Guillermo G. Peydró (Vimeo, 50'31"), french spoken, subtitles in Spanish; this video has fragments of a film by David Moriente and Jazmín Beirak, shot in 2004, showing Máximo Rojo who presents the sculptures