When in the 1990s I began researching art environments, la Maison Bleue was a somewhat lost garden, one could only view by secretly peeping over the enclosure wall. Nowadays (2010) the site still can be visited only occasionally, but anyhow it has a protected status, restoration has begun and the site has become known rather well.

Born in a poor family, Euclide Ferreira  da Costa (1902-1984) in 1922 migrated from Portugal to France where he had found work. He first settled down in the Somme area and later on moved to the community of Dives-sur-Mer in Normandy, where in 1947 he was naturalized.
He settled in a simple cabin that he reconstructed into a house, located on a small plot of land along the rue des frères Bisson. In 1959 he married Marie-Louise Duval, he had met in 1944.

Employee at the nearby Tréfimétaux metal factory, due to a tuberculosis da Costa in the early 1950s had to stop working.

In 1957 da Costa constructed a monument in memory of Laika, the dog that was sent into space with a Russian sputnik (November 12, 1957). This was the beginning of a project which would keep him active for the next twenty years.

He continued his creative activity by making various replicas, typically a couple of meters high, which represent religious buildings, like the Notre Dame in Lourdes, the Fatima Basilique (1962), the Paris Sacré Coeur (1965) and the Sainte-Rita-de-Cascia (1967). He decorated these constructions with a lot of blue mosaic (pieces of pottery, glass, mirrors, flagstones) and displayed them in the garden of some 300 m² around the house.

In 1989 his widow sold the property to the community of Dives, just a short time before she passed away. The couple had no children.

Saving the site for the future.

In 1991 the site was declared a Monument Historique. The city began to restore the garden, which included covering it with a protective device. However, due to the lack of funds, in 1994 further activities were suspended.

So the site remained closed for the public, apart from occasional visits arranged by an association of friends, founded in 2004. 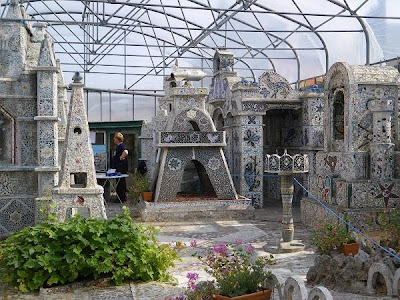 This association also became active in raising funds to save the site for the future. With the help of a number of sponsors and public authorities enough money was collected to start a restoration project.
In December 2009 the Dives community council decided to start such a project in 2010 . The first phase was a study to see establish which measures should be taken, also meant to raise the interest of other sponsors.

In October 2010 the local authorities decided that the next phase would include the restoration of two important elements of the site, the Laïka Mausoleum and the Sacré Coeur. This project was completed end 2011.

In 2013 the replica of the Notre-Dame de Douvres-la-Délivrande was restored.

As part of the national project Mission Patrimoine en péril (Heritage in Danger Mission 2019) the Maison Bleue was selected as one of the projects eligible for financial support. In September 2019 the city of Dives, the Association of Friends and the Heritage Foundation signed an agreement regarding the use of this donation for the further approach to the renovation.