Watford is a town of some 96.000 inhabitants in the county Hertfordshire, some 25 km Northwest of Central London. In the field of art environments it has become known because of the Watford Shell Garden, a creation by Bill and Elisabeth Charge.

Bill Charge (1906-1987) was a baker in Watford. Around 1981, when he was at age 75 and retired, he and his wife Elisabeth began transforming the garden of their house into a shell decorated sculpture garden.

The couple decorated ornaments with shells and made sculptures by modelling these from concrete or by just covering dolls with plaster. These sculptures represented personalities like Humpty Dumpty, King Kong, Samson and such. 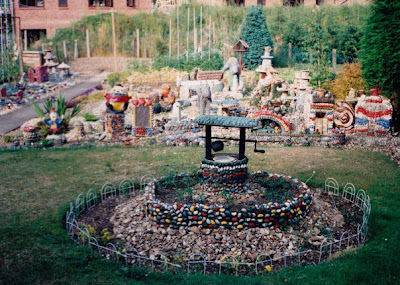 It has been reported that the couple created this art environment just to amuse the children in the neighbourhood. Visitors, especially children, were always welcome and invited to come in.

After Bill Charge died (in 1987) Mrs Charge has continued to take care of the garden. As the pictures, taken in 1995, demonstrate, in that year the garden was still extant. The Raw Vision magazine of that time (issue #12) published an article about the site.

Mrs. Charge died afterwards and then the local housing authority, owner of the property, normalized (that is demolished) the garden soon after her death.

There is a nice story associated with this art environment. End October 2016 the husband of a granddaughter of Bill and Elisabeth posted a message on the Watford Memories and History page on   Facebook, asking -with a link to above post- if anyone remembered the decorated garden.

Well, thousands of people did and this resulted in over 6400 hits (in November 2021) of the post in the course of time.