The small mosaic at the bottom of the tombstone, as in above picture, might be one of the few items left over from a lifetime of creative activity.

Sidney Dowdeswell (1884-1977), who lived in the small community of Hindlip, north of Worcester in England, UK, in 1921 began transforming the garden of his house into a mosaic and shell garden.

For around some forty years he has been active in decorating garden elements with shells and making various mosaic decorated items which he displayed in the garden. He would use all kinds of broken tiles, pieces of glass and shells.

In a comment on this post (May 2015, see below) the site has been described in this way:

"Peacocks, butterflies, birds of every colour all illustrated using tinted broken glass from bottles. Thousands upon thousands of sea shells, broken tile and household ceramic . This mosaic of material all set into a bed of mortar to form a forever work of art. Then there were fish ponds with a miniature bridge and water ways , hand made and painted garden gnomes and caricatures busily fishing.

Arches and walkways, all splendidly patterned and illustrated beyond imagination. The remaining trunks of long dead trees brought to life with a shimmering cover of glass and shell while life-size storks observed through glass eyes the visitor exploring the tightest and most secret of the gardens corners.

You walked pathway after pathway though this little slice of heaven and with each circuit found something new and unnoticed on a previous passing. This was all blended skillfully with a brilliant array of bedding plants and annuals".

Indeed, in the English gardening tradition Dowdeswell also took care that the orderly arranged beds were full of blooming flowers and plants.

Since Dowdeswell's art environment hardly has been documented, just a few biographic details are available so far. In a comment on this post the information was shared that according to the 1911 U.K. census Dowdeswell worked as a house painter when aged 27 (More biographic information is very welcome !)

The artist and his garden have been portrayed in a small film news item (1962), which was archived on British Pathé and is available on their YouTube channel.
Sidney Dowdeswell died in 1977. He was 93 years old.

In the early 1980s the plot was re-developed by a project developer and the garden was demolished.

Above text was written in February 2011. In 2015 I found a couple of postcards, as republished below. 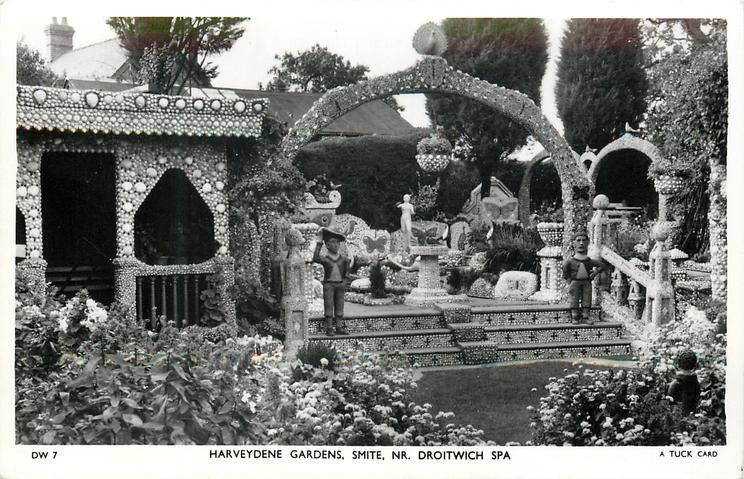 These picture postcards denote the depicted site as Harveydene gardens located in Droitwich Spa, so when I looked at these postcards for the first time, I thought they related to another art environment. 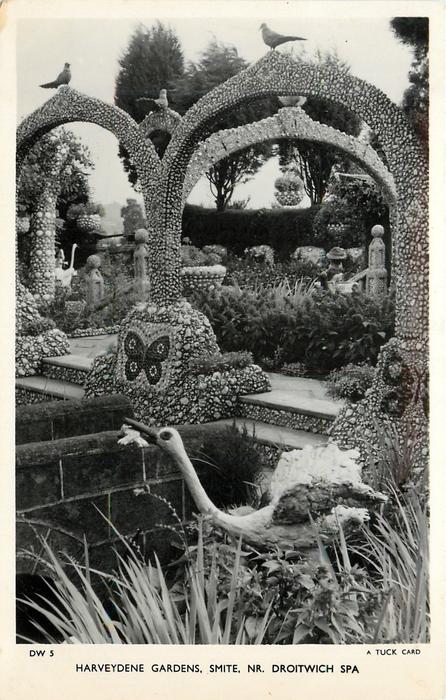 Further research, however, taught me that these postcards relate to Dowdeswell's garden. For example on the Pathé movie (link above) at 1'32" a butterfly mosaic appears that is similar to the one in the postcard below. 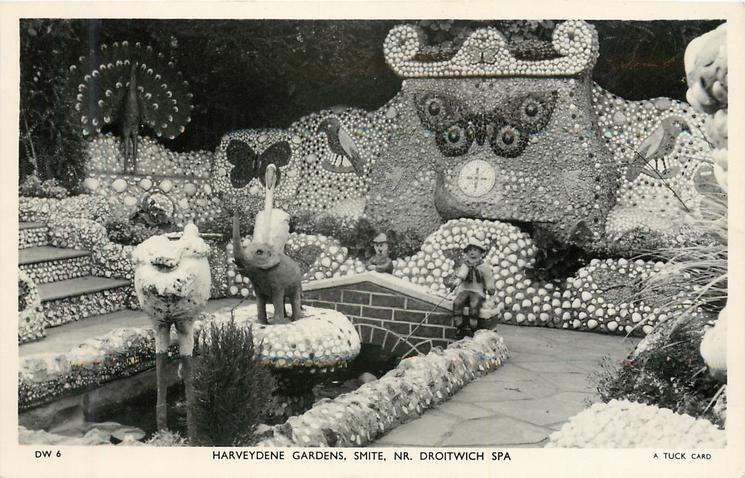 Droitwich Spa is a city that is located near the small community of Hindlip.