On the main road in the direction of the Stelvio Pass, just outside the community of Prad am Stilfserjoch (Prato alla Stelvio) in the Italian province of Alto Adige (south Tyrol), one passes an art environment named Freilicht museum/Museo all'aperto (Open air Museum).

This site was created by Lorenz Kuntner. Born in 1954 in Prad, at a young age he already was attracted by the beautiful nature in the mountains around the community, where as a boy he would herd flocks of sheep.

He became interested in shamanism and Indian lore and gradually he developed into der Mann der mit dem Windhauch spricht (the man who talks to the breeze), the title of one of his books.  Then he began collecting stones from the local river which he decorated with painted faces.

With a certain affection the locals called him the Indian. 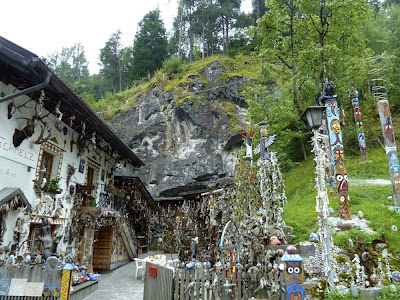 Kuntner began creating various items such as decorated totems, painted stones, poles with skulls of animals, constructions from sheet metal, which he displayed in his garden along the main street.

It has been reported that by positioning poles with skulls along the street, he wanted to deter the busy traffic of cars. The traffic indeed has become less intense, but probably because of other factors too. 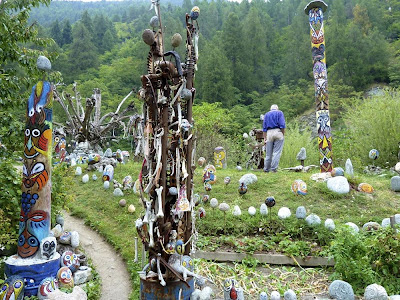 After his wife divorced him, Kuntner left his job as an office worker and settled himself as an independent self-taught artist.

Currently he likes to welcome visitors, who are expected to pay a small entrance fee. 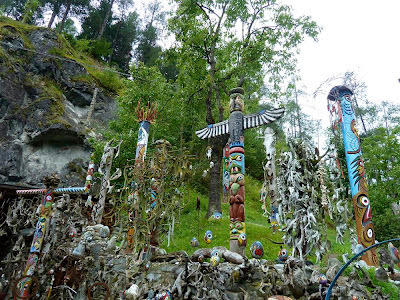 His artistic creations are for sale, prices ranging from a few euro's for small decorated stones to larger amounts for more voluminous creations.

The video in the documentation of this post shows Lorenz Kuntner as a cheery, good-tempered and passionate man, who convincingly loves to talk about what motivates him.

Under his own management Kuntner has published some books with poems and reflections, which can be bought at his address.