Along the former main road N 83 from  Chalon-sur-Saône to Dole that bisects the small community of Damerey in the Burgundy area,  France, a decorated facade requires the attention of passers-by.

This facade is part of an art environment named Chateau de Bresse-Castille created by Roger Mercier (1926-2018), who was born in Épervans as son of a mason and who became an officer with the French merchant navy. He liked travelling around and visited various countries all over the world.

Retired in 1984, Mercier acquired a property along Damerey's main street, a former farm dating back from 1670.

Soon after he had acquired the property he began to transform it into an art environment, doing this as a homage to Manuela Alonso, a lady from Castilla, Spain, he had met in Lyon, who lived in the Chalon area and with whom he had a special relationship.

Mercier embellished the facade of the house with a variety of sculptures of animals, such as a stork, a deer, a sea lion, a peacock,an eagle and cats.

The decoration of the facade is simple in nature compared to what Mercier performed on the courtyard located behind the house.

This courtyard was open (although fenced) along a side street of the main street, but on the other three sides it was surrounded by buildings, so that an indoor area of about 1100 m² was available.

Mercier embellished the inner court with a variety of sculptures, often arranged into scenes. But he also adapted the architecture of the buildings, by adding arcades and building a 17 meter high tower.

The sculptures arranged into scenes mainly include a tribute to Manuela Alonso's homeland Spain, with impersonations of Spanish characters, like dancers and a torero, but also bulls, all painted in bright colours.
But then, one also can meet Neptune and mermaids..... 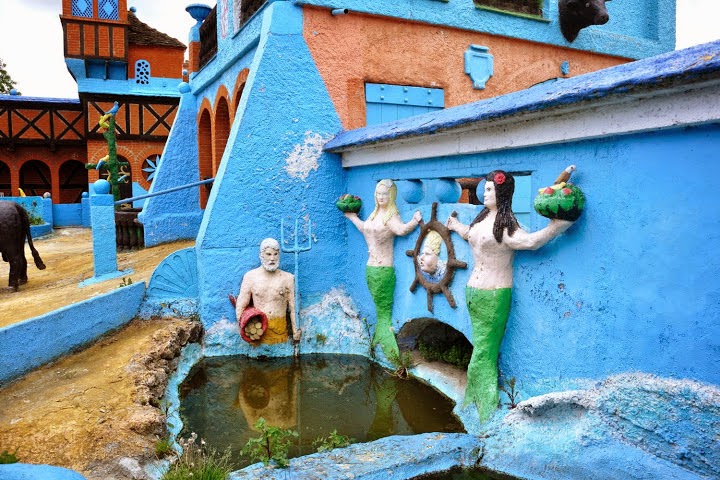 By constructing arcades and decorating the walls of the court, Mercier created kind of a colourful hacienda in the midst of the Burgundian landscape. 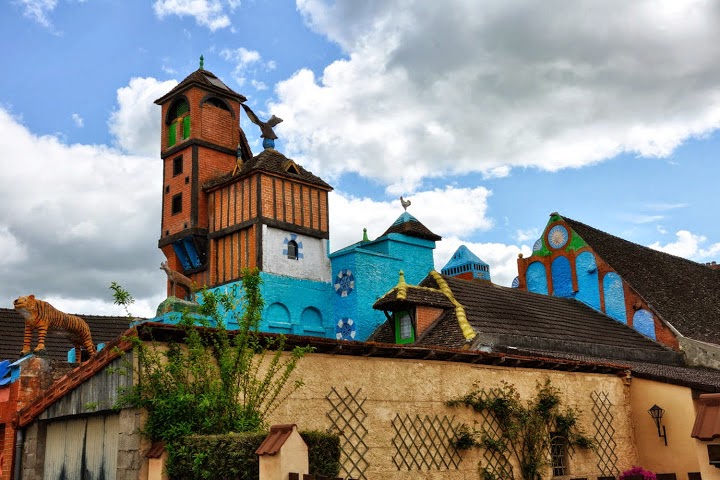 The tower with stairs on the outside and balconies, all painted in various vibrant colors is an example of singular architecture. Mercier built the tower without having access to a concrete mixer or a construction crane. He did all the work by hand. His construction scaffolding was a simple assembly of stakes.

The video below gives a good impression of the details of the tower.

Mercier built his constructions without a preconceived plan and often he did not ask for a building permit in time. In the course of the years the municipality has provided him with 20 building permits in total, partly in retrospect.

All together, it took Mercier some sixteen years (1984-2000) to establish this art environment.

In December 2013 the Journal de Saône-et-Loire reported that Roger Mercier had left Damerey to join his family in Épervans (near Chalon), some fifteen km south of Damerey.. His Lady from Spain had passed away, he was in his late eighties and he wanted to close this chapter of his life history. He left the house as it was, without attempting to sell it.

In 2017 the site was classified as a Monument Historique.

It remains to be seen what the future of this art environment will be. The authorities of the village are positive about the creation, but he municipality is too small to provide the necessary resources to buy and maintain the site.