Unmistakably a replica of the leaning tower of Pisa, Italy, the singular architecture in the picture above can be seen in a garden in the community of Corris in Wales, UK.

It's a creation by chicken farmer and caravan site owner Mark Bourne (1922?-2009), who had a strong love for Italy.

With his wife Muriel he would spend there many a holiday, making pictures and sketches of the numerous architectural monuments in this country. 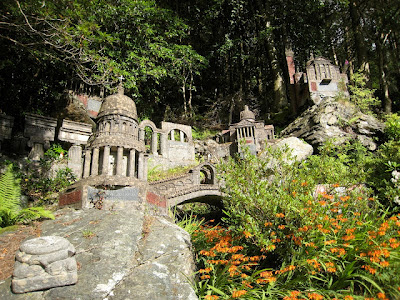 Around 1980 he began making replicas of these classics, which he displayed in the reclining, terraced garden near his house, located on a hill near the village.

He made these creations by applying cement to a model, made from iron wire and redundant materials like old oil drums, aggravating the base with stones. collected in a nearby river bed. 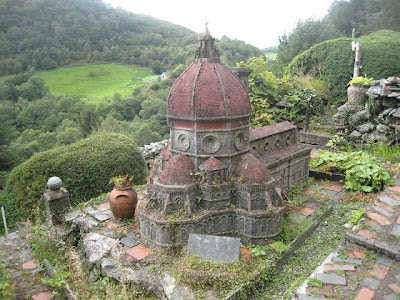 Ultimately the site had some thirty items, including the Tower of Pisa, the Rialto Bridge in Venice, the Duomo from Milan and Sienna's Bell Tower. The highest creations had a height of some 2.5 meters (8.2 feet).

Although Bourne himself did not seek publicity, around 2001 the site got some nationwide publicity in the printed press and on TV, and thereafter the narrow paths of the garden would regularly be accessed by touristic visitors.

In the publicity the art environment was often referred to as Little Italy, but Mark Bourne's circle of friends usually used to name it Mark's Folly.
. 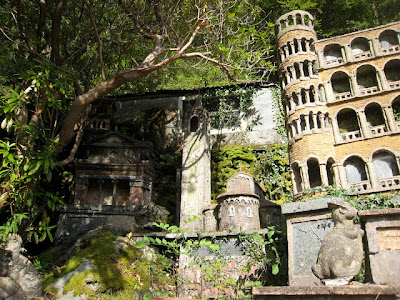 Some time after his death, his wife Muriel decided to live elsewhere in the village so as not to have to make the ascent to the house. She sold the house to a close friend to Mark, who bought it for Muriel's son and his wife.

When that friend died, another friend of Mark, named Richard Withers, was willing to take care of the site.

In August 2019 a Frenchman using the artist name Tiramisu Bootfighter -who travels through various countries in Europe in the context of his project La Valise - Galerie Ambulante- visited the site. 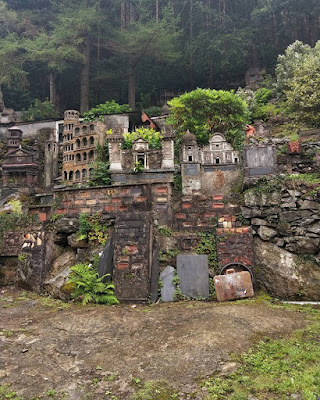 He made the photo above and the one below (available on Facebook), which show that the site as such currently still exists. 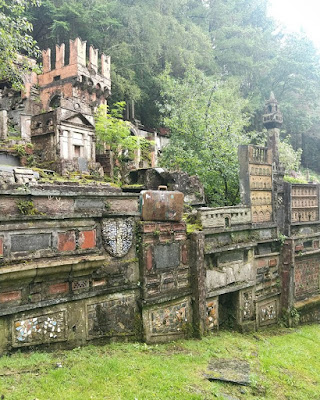 However, as discussed in 2020 in an interview with Richard Withers, keeper of the garden, the structures are not always solidly built and begin to show defects in some places. So the question arises whether in the longer term the (financial) resources are available to maintain this art environment

Documentation/more pictures
* Article (January 18, 2023) by Steve R, Bishop on his weblog Everywhere from where you are not, with a variety of pictures and a review of many details of the site
* Article (May 29, 2021) by Andrew Forgrave on Wales Online, with a review of the future of he site
* Website The Keepers Project (2020) has a series of pictures of this art environment and an interview with Richard Withers, a friend of Mark Bourne, who is a keeper of the site
* BBC-news (early June 2021) with a comparable revie
* Weblog The Side Real Press Blog , February 21, 2012
* Weblog Digital Humanities Center, October 30, 2012
* On Flickr a large series of pictures (2007) by Tim Dunn