all pictures courtesy of Thierry Bucquoy,
from his weblog ¹

Like the stories of so many outsider environments, what follows is a story of transcience.

Written in Occitan, a language descendant of latin as spoken in the Roman empire and traditionally the language used in southern France, the name of this cabin refers to the former profession of its owner: operator of the mill of Rochevideau, a community located in a rural part of the Perigord

Marcel Debord (1909-1994) managed the mill for many years but then, in his early fifties he got such problems with his legs that he had to decide to finish this job.

He began a new life focussing on making all kinds of decorative items from iron and sculptures from concrete. These creations he displayed on and around a small cabin located not far from the mill. He probably used this cabin also as a workshop.

The decorative items included horse hoes, all kinds of iron utensils and various other iron elements like spoons and forks, which in a decorative way were attached to a concrete plate.

Debord would use molds to create his concrete sculptures. He mainly depicted small animals from the area where he grew up and lived, such as a snail, a pigeon, an owl, or a swan, as in the picture below.

All together a bestiary of familiar animals...

Living alone, these small constructions may have been special to Debord.

The animals grow like flowers
Just sprinkle them,
Tame them, to turn them into friends
Partners of his solitude

But then Debord also has made a small number of sculptures of people, impersonations which also refer to his homeland , such as a peasant woman near a well, a fisherman, a hunter, a miller.... 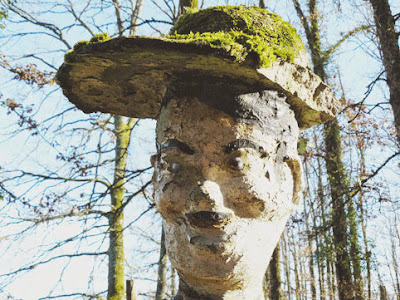 Debord may have been active in creating this environment for some thirty years. However, as far as I know, during his life he hasn't got any publicity in France on a national level.

Bruno Montpied visited him in 1992, but (rightly so) hesitated to disclose Debord's whereabouts, because of his poor health. Years later, in his Éloge des jardins anarchiques (2011) the author has reported vividly about his visit to the site and his meeting with Debord.

Debord died in 1994 and following his death the site has been left uncared for. In 1999 a big storm, which struck down a lot of trees, has demolished most of the site too.

¹ Thierry Bucquoy and his partner Maryline live in Ligueux, in the Perigord area. Their garden Le jardin des délices, regularly houses art expositions. In his weblog Thierry writes about gardens, art, artists, and a variety of other subjects